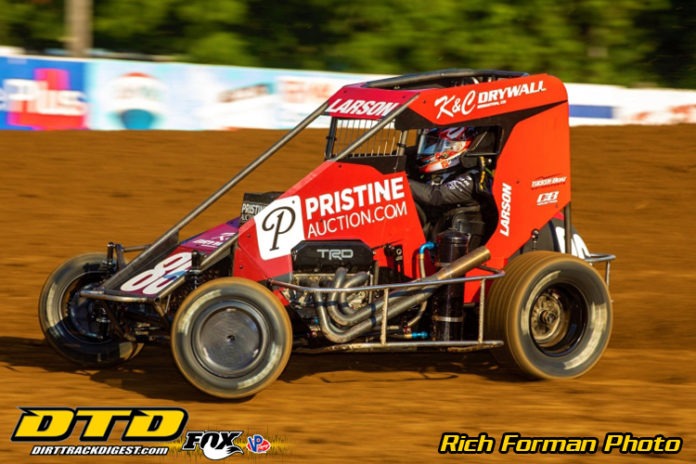 LAWRENCBURG, IN – A one-race “losing” streak was more than enough for Kyle Larson to endure as he got back on the winning track and returned to victory lane Saturday night in the penultimate round of Indiana Midget Week at Lawrenceburg Speedway.

The Elk Grove, Calif. native had won eight features in a row across USAC, World of Outlaws and All Star competition over the past couple of weeks prior to finishing as the runner-up on Friday night at Lincoln Park Speedway’s Indiana Midget Week event.

Larson’s impressive victory at “The Burg” came on a late-race restart with four laps remaining as he slid by leader Thomas Meseraull for the pinnacle position to earn his fourth Indiana Midget Week score in the last five nights and his ninth career victory at IMW, tying him atop the all-time list for most IMW wins with Bryan Clauson.


Though Larson’s personal win streak was interrupted just once this week, the roll continued for Tucker-Boat Motorsports who now stands an unblemished five-for-five in the IMW series this year, and is just one win away from becoming the second team ever to sweep the entire slate of Indiana Midget Week races in a single year (Keith Kunz/Curb-Agajanian Motorsports in 2016).

“That was a fun race,” Larson exclaimed. “You had to work for that one and, once again, (we had) a good enough car to keep us in contention. Chad Boat and everybody there, they prepare such nice cars, probably the nicest midgets in the pits.”

Larson’s workload began from the third position for the 30-lap feature, his best starting position thus far in this 2020 Indiana Midget Week. Meanwhile, pole sitter Tyler Courtney encountered a bit of trouble on the first turn of the opening lap as he bounced up the racetrack, losing three positions and dropping to fourth as series Rookie Buddy Kofoid took advantage to shoot out to the front from the outside of the front row and built an early 1.5 second lead.

The action came to a halt on the sixth lap as last year’s series Rookie of the Year Andrew Layser barrel-rolled on the high side between turns three and four. The night’s first heat race winner escaped unscathed.

On the ensuing restart, second running Thomas Meseraull was on the loudpedal as he sprinted to the inside of Kofoid for the race lead entering the first turn. A half lap later, Larson used the high line to drive around Kofoid for second and was an instant challenger to Meseraull up front, taking a few swings for the race lead, albeit unsuccessfully, as Meseraull rode the wave of momentum up top.

The trio went three-wide on a lap 11 restart following the stoppage of 2017 Indiana Midget Week champion Shane Golobic in turn two. Larson was able to get wheel-to-wheel to the inside of Meseraull in turns one and two directly following the restart while Kofoid reemerged as a contender, doing likewise on the bottom to the inside of Larson as he made a bid to get to the front.

Meseraull held serve at the head of the pack with both Larson and Kofoid falling into line over the next 11 laps until a yellow flag flew for Jason McDougal, who lost a right rear tire before coming to a stop at the top of turn one. McDougal was making his debut in the Keith Kunz/Curb-Agajanian Motorsports team’s No. 97 driven earlier in the week by Zeb Wise and had worked his way up to fifth by the time of the caution. He’d restart from the tail and finish ninth with new rubber.

On the lap 22 restart, Larson made his move, sliding underneath Meseraull entering turn one. Meseraull answered the bell and drove downhill off the turn two banking to the inside of Larson to retake the position. The following lap, second-running Larson and quickly approaching, third-running Kofoid served up a double slider on Meseraull with both scooting past in turn one, yet Meseraull took on both of them simultaneously, and outpaced them into turn three as he drag raced and bested both as the first to reach turn three just before 16th place running Justin Grant stopped at the top of turn four to bring out the yellow.

Kofoid, now scored in second on the restart with nine to go, took a couple shots at Meseraull to no avail and was soon challenged by Larson for the second position with Larson ultimately prevailing using a turn one slider with six laps remaining. Larson immediately clamped down on Meseraull for the lead but was unable to get by each time he stuck a nose to the inside of Meseraull at each end of the 3/8-mile. Meseraull utilized the topside “mo” to pull away to a six car length lead.

Suddenly, with four to go, contact at the back half of the top-ten sent ninth-running Clinton Boyles into a 360-spin exiting the second turn. By rule, the yellow flag is automatically displayed following a 360-degree spin, resetting the deck for the final four-lap stanza.

Larson, in his Tucker-Boat Motorsports/Pristine Auction – K & C Drywall/Spike/Speedway, knew that time was running out and was fully aware that his time was now or never and he had to throw the kitchen sink at Meseraull on the final restart if he was going to win this deal.

“I couldn’t really run the top like I wanted to because I’d bounce a lot, then I’d get in the cushion and I’d be bogging,” Larson explained. “I knew I had to try and make something else work. I slid T-Mez there one time and I felt there was a lot of grip at the entry of one. Once I got clear of Buddy there after he got by me on the one restart, I was able to just run that line to protect any sliders that might get thrown at me. At the same time, I could make up a little ground on him and I knew that, on that next caution I got, I had to do everything I could because we only had like four laps to go.”

With that opportunity, Larson capitalized on the chance, sticking the turn one slide job past Meseraull for the lead. Meseraull remained in Larson’s shadow and the duo went toe-to-toe into turn three, but “T-Mez” was unable to slide past, falling into line behind Larson at the exit of turn four where he was then subsequently challenged and, ultimately, overtaken for second by Kofoid in turn one with two laps remaining.

Up front, however, Larson had checked out, finishing off his fourth victory of the week by 1.704 sec. over Kofoid, Meseraull, and series point leader Chris Windom with Courtney rounding out the top-five.

It was another sterling performance from Kofoid, the series Rookie out of Penngrove, Calif., who equaled his best career finish of second in his Keith Kunz-Curb-Agajanian/Mobil 1 – JBL Audio – TRD/Bullet By Spike/Speedway Toyota.

“I couldn’t really get my car to take off that good,” Kofoid admitted. “As the race went on, it actually got better. I was hoping that yellow where we were going three-wide was going to stick, but then Kyle got back by me. I knew that cushion was getting a little treacherous getting into one and really to the center. Sliding yourself, you can make speed and kind of catch it off, and I started doing that at the end. I was really good at the top of three and four and could carry a lot of speed through the center.”

It was a heartbreaker for San Jose, California’s Meseraull who led a race-high 21 laps as the popular veteran driver sought his first career USAC National Midget points-paying victory, but wound up finishing third in his Response Management Services/EnviroFab – Guess Performance Parts/Spike/Speedway Toyota.

“At the end there, on the starts, I was just struggling on the starts,” Meseraull lamented. “If I could get the momentum rolling, the thing was just bad to the bone. Hats off to these guys. They’ve really stuck behind me. I’ve torn up a bunch of stuff this week. We’ve had a tough time, but we’ve got the speed. We were quick time tonight, battling it out with two of the best guys out here. It’s a little disheartening sitting here after leading a bunch of the laps. My guys needed that. We needed that win. But you know what, we’ll go to Kokomo tomorrow, hang it to the floor and try to rip the lip.”

**Andrew Layser flipped on lap 6 of the feature.