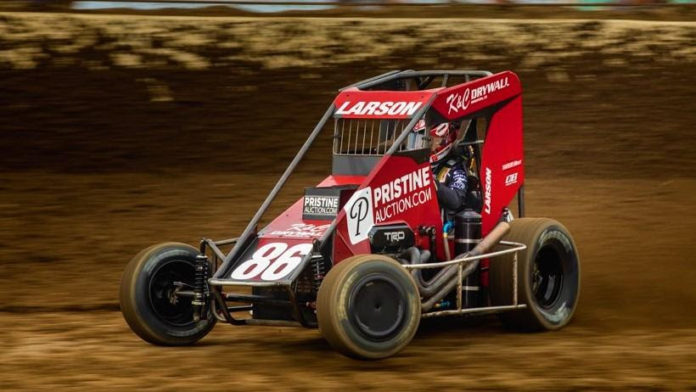 KOKOMO, IN – Two nights, two blown engines. Those were the cards Tanner Thorson and his Hayward Motorsports team were dealt in the two races leading up to Sunday’s Indiana Midget Week finale at Kokomo Speedway.

Out of powerplants and out of options, the team received a lifeline in the 11th hour from none other than a fellow competitor. A middle-of-the-night scramble ensued, and a borrowed Toyota engine was installed under the OilFire – FK – Walker Filtration – Smith Titanium/Spike 4-Coil car.

Despite the lack of sleep, the thrashing and the unknowns that were unloaded from their trailer Sunday night, Thorson still believed that all signs pointed to victory.

“For some reason, I felt like it was going to be the day to win. I don’t know why,” Thorson admitted. “I went to bed about 4:30 or 5 this morning and got back up at 8. Dave McIntosh, Cannon Mcintosh’s father, is the reason why were able to race tonight – he and Cody Cordell, who takes care of all of Cannon’s personal equipment. I can’t thank them enough for allowing us to borrow a motor and be able to race.”

Thorson (Minden, Nev.) and Team Hayward defied all the odds that were stacked against them to claim their third USAC NOS Energy Drink National Midget victory of the season with a slip underneath on a late-race restart with three laps remaining, then outlasting 2020 Indiana Midget Week champion Kyle Larson to beat him to the line in a photo finish by half a car length – 0.065 of a second.

Thorson started seventh in the 22-car field for the 30-lap feature event, but instead of a instantaneous charge, Thorson dropped back to ninth and then to 10th in the early stages of the race. In fact, Thorson was still right where he started (7th) at the halfway point.

On a lap 19 restart, race-long leader Tyler Courtney bounced through turn one and flipped in an incident in which 3rd running Thomas Meseraull also spun. Courtney walked away from the accident, which sent him to a disappointing 21st place finish. Meseraull restarted and raced his way back to 9th.

Thorson was elevated to fourth on the restart, and although Thorson didn’t appear to be a challenger for victory early on, this just happened to be the point where Thorson decided to turn up the wick. He now knew he mustn’t be impatient or overzealous in his pursuit for victory because he also knew that, at this point with 12 laps remaining, his car was just beginning to come to him.

“My whole race started off kind of slow,” Thorson explained. “The last few nights, I’ve been backing up at the start of the race, but my car comes in so good at the end of the race, I knew just to stay patient and not get too crazy cranking on the shocks and just let my car come to me.”

The two-car Tucker-Boat Motorsports juggernaut of teammates Chris Windom and Larson now occupied the top-two positions. Those two drivers aimed to provide the Tucker-Boat team a complete sweep of the entirety of Indiana Midget Week feature wins, a feat that had only been accomplished once before in 2016 by Keith Kunz/Curb-Agajanian Motorsports.

But with Windom a one-time victor at 2020 IMW and Larson already claiming a record four wins and already having this year’s IMW title in hand, the two appeared to be odds-on favorites to dominate the top-two spots down the stretch. However, Thorson, the 2016 USAC National Midget champ, had other plans in the hopper, as he tracked down Larson and made his move for second with an inside turn two pass of him with five laps to go to move to second.

“Once I got to Larson on that restart, I kept seeing his left front tire locking up and pushing out, pushing out, and I knew I needed to get in there hard and be able to beat him at the exit because he was blowing his exit way too much,” Thorson recalled. “I was able to watch both of them. They weren’t getting as close to the infield tires as I was. A couple times, I actually even brushed it and felt it barely tap the wheels. It’s crazy how precise you have to be to be able to run down there.”

Now with only Windom standing between he and victory, Thorson still had nearly a full second of ground to make up in less than five laps around the half-mile, but received another lifeline when 19th running Ethan Mitchell clipped an infield tire in turn two, which then proceeded to roll into the middle of the racing surface, forcing a yellow flag and a restart with three to go.

It was just what Thorson needed and, as the green flag dropped, Thorson ducked to the inside of Windom exiting turn two and moved to the lead as third-running Larson headed topside and got the groove working just in time to make one last patented charge that saw him pass a series-high total of 41 cars in features throughout Indiana Midget week, including his emergence ahead of Windom on the white flag lap.

On the final lap, Windom attempted to return to the fray up front a car length back of Thorson midway down the back straightaway while Larson held the same social distance length at the top, with Thorson occupying the middle. Thorson closed the lane on the bottom of turns three and four from Windom and came off the final corner to defeat a rocketing Larson on the high line to the stripe by a half-car length in the closest finish of 2020 Indiana Midget Week.

Behind Thorson and Larson, Windom took third while Clinton Boyles secured a career-best 4th place finish and Kyle Cummins was an impressive 5th after starting 15th.

All the work and time that comes into preparing cars to win USAC National Midget races can be taxing, but for Thorson, he considers his role on this team as one that has helped his resurgence in the 2020 season in becoming already a three-time series winner through the first 11 events.

“I think there’s a lot to say about being able to do your own car,” Thorson said. “Nothing against Keith Kunz and his whole team, but there’s something about that, for my satisfaction, to be able to do my car. I get to build it throughout the week and set it up and there’s nothing that means more to me than being able to do that, and I think it drives me even harder. I want to win more than anybody out here and I think a lot of that is because I kind of need to. I make a living off what I make here whether I blow up or not. I might walk out with 5 bucks or I might walk out with 3-grand. It’s just a matter of pushing myself as hard as I can. We’ve been one of the fastest cars all week but just haven’t been in the right situations. (We’ve been) sitting ducks, kind of like those two were tonight. I was able to finally take advantage of that tonight and pull off the win.”

For Larson (Elk Grove, Calif.), his first time running the full Indiana Midget Week schedule since 2011 was a major success, winning four of the six events, and finishing second-place in the other two, including Kokomo, to claim his first IMW title by a 73-point margin, trouncing the previous record 44-point margin set by Darren Hagen in 2012.

But, on Sunday night at Kokomo, Larson very narrowly missed the equivalent of a walk-off home run by winning the final race and the Indiana Midget Week title in one fell swoop such as Bryan Clauson in 2009, Brad Kuhn in 2010, Christopher Bell in 2013 and Rico Abreu in 2015.

“The last restart was really exciting,” Larson recalled. I wish I would’ve got the top going a little sooner. I felt like we were running an okay pace around the bottom where the top wouldn’t keep up. There, we got to that last caution, and I said ‘screw it,’ I got to try something else.”

**Tyler Courtney flipped on lap 19 of the feature.