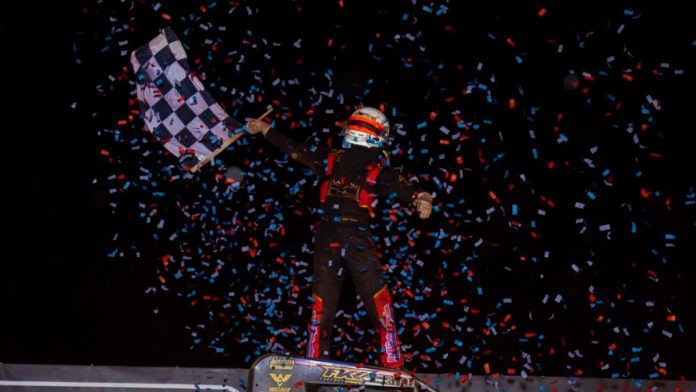 On Sunday at Caney Valley Speedway in Kansas, a caution with four laps remaining saw Tyler Courtney positioned directly behind Thorson for a late-race restart. The end result had Courtney sliding past Thorson for the lead and the eventual win, while a disgruntled Thorson fell to a 15th place finish after spinning to a stop as he tried to challenge Courtney for the lead.

On Tuesday night’s Mid-America Midget Week finale, though the scene began in the same manner, Thorson made sure his ultimate fate was going to play out differently, this time in his favor.

This time, a late caution stifled Thorson’s near five-second advantage with just three laps remaining. By rule, lapped cars were moved to the tail, and that put, yet again, Courtney, right on his rear bumper for the final restart.


As it turned out, Thorson had to endure three shots at a final restart due to a succession of yellows that halted his quest. On the third and final try, which went clean and green, Thorson wasn’t to be denied on this night, ridding himself of the recent plague of unfavorable fortune to win by 0.598 of a second for the 17th victory of his USAC NOS Energy Drink National Midget career, tying him with Jay Drake and J.J. Yeley for 38th all-time.

The reversal of fortunes was a welcome change for the 2016 series champion from Minden, Nev. who had finished outside the top-12 in two of his past three starts. Yet, despite a mid-stream change in approach during the night, it was back to normal for Thorson, who earned his fourth feature victory of the year, equaling him with Kyle Larson for most in the series.

“Racing is a headgame in itself. It’s about whoever can stay out of their own heads the most in the car and in the pits. We all know in this sport, you can’t win every night,” Thorson reiterated. “We’ve definitely had one of the fastest, if not the fastest car every night (this week). The last few nights, I’ve just been second guessing myself as far as setup. I second guessed myself to start tonight. I changed a little bit of the spring package I was running; it wasn’t working. Then, I got off the coils and went to bars in the rear and I realized why I switched to coils and why I’m going to stay on coils.”

Thorson began his 30-lap race from the pole and led the opening two circuits just before 16th running Kaylee Bryson flipped hard over the banking in between turns one and two. She was shaken up a bit but ultimately exited the car under her own power.

On the ensuing restart, Windom took a run at Thorson for the race lead with a slider in turn three. Thorson ducked back underneath off turn four to snag the lead. However, the driver who was most “on the charge” in the early stages was Cannon McIntosh who used the bottom groove to race past both Windom and Thorson to lead at the stripe on the fourth lap.

Thorson regained the lead from McIntosh a lap later and continuously stretched his lead out over the competition throughout the remainder of the contest. Meanwhile, a tussle behind him waged as Windom and McIntosh exchanged sliders, allowing fourth-place Courtney to gain ground on both, rolling the bottom to make it three-wide at the line on lap 10.

Through the middle stages, leading series Rookie Buddy Kofoid made a surge toward the front all while the numerals on the left side of his car’s tail tank were flapping in the breeze, passing Courtney for third on the 18th lap, then by Windom with an inside move on the following lap for second.

With 11 laps left to go, Windom, Courtney and Kofoid ran bottom to top, three-wide for the runner-up position. Windom slid past Kofoid entering turn three; Kofoid biked the left rear on the cushion simultaneously and the two locked together briefly above the turn four cushion with Kofoid’s front bumper interlocked with Windom’s left nerf bar.

Courtney promptly sped underneath both to grab second while fifth-running McIntosh plowed into the left front of Windom’s car, knocking Windom’s car straight and sending McIntosh’s ride airborne before landing on all fours and continuing onward with a slightly askew right front wheel while dropping to seventh at the checkered.

Now the race was a simple cat and mouse chase between Thorson and Courtney. However, Thorson was serving as the ultimate hide-and-seek champion for the time being with him being out of sight and more than a straightaway ahead of Courtney as he navigated traffic in the closing stages.

Only a caution could disrupt Thorson’s yellow brick road path to a stress-free, dominant triumph. And that radiant yellow piece of cloth became visible just three laps from the end when sixth running Tanner Carrick stopped on the back straightaway, forcing his car to be towed back to the pits.

“When that yellow came out, I was like ‘oh great, here we go again,'” Thorson admitted. “Sunday night, I had a good little lead. We had a bunch of yellows there at the end of that race that cost me. I got in too hard and looped it. I just talked to myself a little bit trying to amp myself up and try not to lose what I had going because I knew I had such a fast racecar.”

The first attempt at a restart saw Courtney briefly slide ahead of Thorson between turns one and two before Thorson shot down off the high side of the turn two banking to re-snag the lead. Moments later, Trey Gropp, running 15th at the time, slowed on the front straight to necessitate a yellow. The following restart too was thwarted after a single lap when 11th running Sam Johnson jumped the curb and landed outside turns one and two on the adjacent go-kart track.

Thorson anticipated Courtney was going to throw the kitchen sink, the kit and kaboodle, and everything else at him on each restart, so he altered his starts to throw a figurative banana peel into the equation.

“I knew Courtney was going to the bottom or slide me or do something,” Thorson predicted. “I tried to screw my starts up a little bit and kind of get the guys off their feet a little bit to get the advantage that I had before, and it worked. Then I saw Tyler (Courtney) there at the bottom on the first restart. The second restart, he went back again, and I knew from running up there early in the race that momentum was going to be the key there at the exit of turn two. I just kept it up there and thought about sliding myself a bunch, but I knew I’d lose ground. I just kept doing what I was doing, and it paid off.”

Paid off it did as Thorson distanced himself from Courtney in the final two-lap shootout, launching himself around on the top shelf of two to race on to the victory in his Hayward Motorsports/Oilfire – Factory Kahne – Walker Filtration/Spike/Stanton SR-11x over Courtney and a hard-charging Jerry Coons Jr. who rolled the bottom to third. Kofoid took fourth while series point leader Chris Windom rounded out the top-five utilizing a backup car following mechanical troubles with his primary during hot laps.

In Fatheadz Qualifying, Jenks, Oklahoma’s Kyle Wilson, making his USAC debut, biked in turn three and flipped over the turn four wall. He continued flipping end-over-end after exiting the racetrack before landing in a pile of brush. He was uninjured.

**Kyle Wilson flipped over the turn 4 wall during qualifying. Kaylee Bryson flipped on lap 3 of the feature. 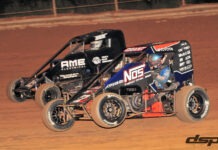