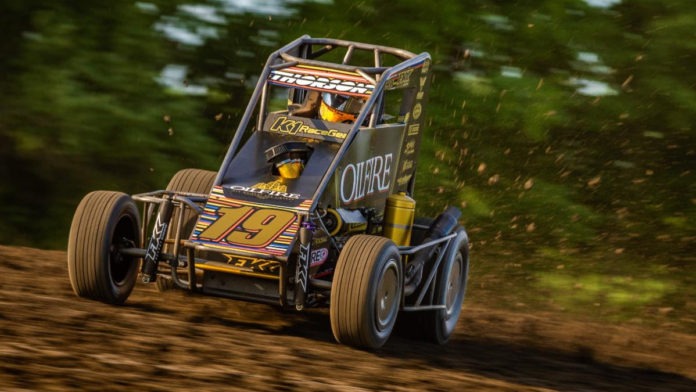 NEWMANSTOWN, PA – During the USAC NOS Energy Drink National Midget debut at Lanco’s Clyde Martin Memorial Speedway back in 2016, Tanner Thorson needed all the heroics he could muster to pull off a last-lap, last corner pass to take the victory.

In 2017, the Minden, Nev. native repeated the feat as a Lanco victor once again at the 1/8-mile bullring in Newmanstown, Pa. This time, however, it was a relative comfort cruise, comparatively speaking, as Thorson led all 40 laps from start to finish.

Thorson led the first ever USAC Midget laps at Lanco in 2016, leading the first three, then the final one en route to victory. The 2016 USAC National Midget champion led flag to flag in 2017 and remains undefeated on Lanco soil in his career.

Forty lappers are somewhat a rarity these days compared to the more-standard 30-lap events that make up the majority of the schedule. Forty laps can add extra variables and intangibles throughout the duration, especially at the extreme bullring that is Lanco, where the series visits this Saturday night, August 8, for the Eastern Midget Week finale.
It’s an elbows up, always on the toes affair at Lanco that makes it entertaining for those of us who are watching and a thrill a second pursuit for competitors.

Saturday at Lanco will mark the fourth 40-lap feature on the schedule this season. While Thorson has won three 40-lappers in his USAC career, no driver owns more wins this season in that distance with the series (2) than reigning series champion Tyler Courtney (Indianapolis, Ind.).

Among drivers expected in the Lanco field, none have more than Courtney at five, including victories at Port City Raceway in Tulsa, Okla. and Jefferson County Speedway in Fairbury, Neb. Rich Vogler leads all driver with a seemingly unreachable record of 33 career 40-lap USAC National Midget feature triumphs.

Courtney (Indianapolis, Ind.) has finished on the “podium” twice at Lanco, taking 3rd in 2017 and 2nd in 2019. In 2018, Courtney flipped early while running 6th, then returned to the field and drove to a 10th place result.

Justin Grant (Ione, Calif.) has joined Petry Motorsports on their tour of the east in a third car alongside Tanner Carrick and Emerson Axsom. Grant’s only two previous Lanco appearances have been a little rocky. He won his heat in 2017, then flipped on the opening lap of the feature. His second attempt in 2018 also saw him flip with 15 laps remaining. The current USAC AMSOIL National Sprint Car point leader got back up on the horse and battled back to a 7th place finish. Grant owns two career 40-lap USAC Midget victories, adding one this past May in Port City.

Carrick (Lincoln, Calif.) captured his lone career USAC National Midget feature win a 40-lapper during the 2019 season at Sweet Springs, Mo. The 2019 USAC National Most Improved driver has finished inside the top-ten in all three of his Lanco starts, 8th (2017), 6th (2018) and 9th (2019). Rookie Axsom (Franklin, Ind.), has onoly made five career series starts, but has finished inside the top-8 in each of the last four.

Kevin Thomas Jr. (Cullman, Ala.), who’ll reside in Heffner Racing’s Midget throughout Eastern Midget Week, led the first 16 laps in his 2018 debut before being involved in a turn three crash while leading that knocked him out of the race. He recovered nicely in 2019 with a solid 4th place result.

Andrew Layser, a product of Collegeville, Pa., has been solid in each of his past two starts after taking 17th in 2013 as an ARDC regular. The 2019 USAC National Midget Rookie of the Year charged from 19th to 8th in 2019, then elevated to a 7th place finish in 2019. Along with Windom and Layser in the Tucker-Boat Motorsports stable for the week is Dillon Welch, the 2009 USAC Kenyon Midget champ and former “voice of USAC.”

The No. 39BC from Clauson-Marshall Racing won the event in 2018 with driver Zeb Wise. Cole Bodine (Rossville, Ind.) has the reigns of the ride this year as he makes his first Eastern Midget Week appearance. Ethan Mitchell returns for a second Lanco adventure after a 14th place finish in 2018. Kyle Cummins, a recent winner of the NOS Energy Drink Indiana Sprint Week finale at Tri-State Speedway on August 2, will venture east in Jack Yeley’s midget for the final two nights of Eastern Midget Week at Path Valley and Lanco.

Royersford, Pennsylvania’s Steve Buckwalter took 11th in his singular Lanco appearance in 2016. Adam Pierson (East Corinth, Vt.) finished 16th at Lanco in 2017, but it was there that he also recorded his best career USAC National Midget feature finish with a 4th in 2018. Kevin Woody Jr. notched a 17th place finish at Lanco in 2018 while Steve Drevicki took 14th in 2019.

Keith Kunz/Curb-Agajanian Motorsports have won three of the four Lanco USAC Midget races, in 2016-17 with Thorson and again in 2019 with Logan Seavey. The team will be bringing its talented group who’ll all be making their Lanco USAC debuts – Penngrove, California’s Buddy Kofoid (3rd in points), Bixby, Oklahoma’s Cannon McIntosh (5th in points) and Locust Grove, Oklahoma’s Daison Pursley (7th in points.).

Advance general admission tickets will also be sold on the day of the race from 11 a.m. to 3 p.m. at the pit shack. While all seats will be general admission, purchasing tickets in advance will permit fans to enter at 3:30 p.m. – one hour prior to everyone else. Blankets, seat cushions, etc. may be put down upon entering the spectator seating area to reserve your seats (we will not allow seats to be saved prior to 3:30 p.m.). Fans with advance tickets may then walk down to the pit area, where they will have approximately two hours (3:30 to 5:30 p.m.) to tour the pits and meet the USAC stars. The pits will be cleared of spectators at 5:30 p.m.

Saturday night’s Lanco event will be aired live on FloRacing at https://bit.ly/2Zs7zFP.