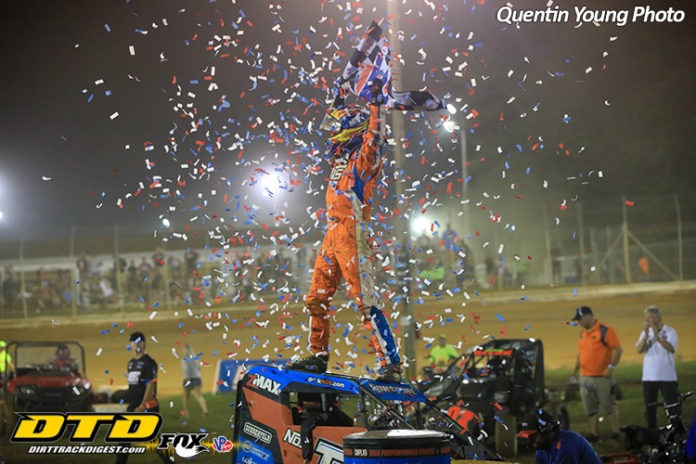 NEWMANSTOWN, PA – Sometimes, in the ups and downs of life, you just need a bump in the right direction to get you going where you need to go.

In Saturday night’s Eastern Midget Week finale at Lanco’s Clyde Martin Memorial Speedway, Tyler Courtney received just that early on while running 4th in the 40-lap feature when he encountered a bit of a bumpy road entering turn one.

As Courtney slowly coasted, the trailing car of Justin Grant smacked into the back of Courtney’s car, which then fired back up and Courtney drove away before he ultimately took the lead from Tanner Carrick on the 14th lap, then thwarted off several challenges from Buddy Kofoid to win the event.

“I ended up hitting the kill switch and it killed the car,” Courtney revealed of the incident. “When I bounced, I hit the switch, then Grant hit me, and I was looking down to figure out what happened. I flipped the switch back on and kept going, and he stopped there. I got lucky there, but sometimes you’ve got to be more lucky than good and I’ll take it anyway I can get it.”

Courtney started 6th in the 22-car field after earlier setting the fastest time in both hot laps and qualifying. Tanner Carrick, meanwhile, raced from his pole starting position to the lead at the start while outside front row starter Chris Windom bounced off the turn two guardrail and slipped to 4th behind Chase Johnson and Courtney.

Shortly after his boost from Grant, Courtney nearly saw positional disaster strike again, nearly spinning out in turn four, as the competition raced by, slipping back from 4th in no time flat. However, a timely stoppage just a tick of the second hand later helped him at just the right time as Kenney Johnson, making his season debut with the series, flipped in turn one. He was okay.

Shortly thereafter, once racing resumed, Courtney pulled off a two-for-one special in turn four on the sixth lap, racing first by Windom then Chase Johnson in one fell swoop to surge from 4th to 2nd. Johnson spun three laps later on lap nine to halt what would’ve been a career-best run, yet he still charged back to finish a respectable 8th in the final rundown.

On the 11th lap, Courtney slid his way past Carrick for the race lead in between turns three and four. Carrick countered back underneath Courtney with Carrick’s right rear and Courtney’s left front brushing sidewalls. Courtney took a couple steps back from Carrick and reloaded for another shot on the 13th lap.

Instead of sliding Carrick, this time, Courtney shadowed Carrick on the topside between turns three and four. Down the front straightaway, Carrick and Courtney were rear bumper to chrome horn. Courtney hopped and skipped off the bottom of turns one and two and launched to the race lead on the 14th circuit past Carrick.

Nearing midway, the top-two of Courtney, and now Buddy Kofoid, separated themselves from the rest of the field by nearly a half-lap as Courtney fished through the back end of the field utilizing the top shelf to work his way around lapped traffic.

Following a yellow for 7th running Dillon Welch’s turn four spin with seven laps remaining, Kofoid took a major run at Courtney for the number one spot, sliding into turn three with a full head of steam right up into Courtney’s lane up against the outer guardrail in turn four. However, Courtney never blinked, never backed off, and kept his foot on the loudpedal to race his way back around Kofoid to retain the lead for good.

“I’d be lying if I said I didn’t flinch,” Courtney admitted. “At this point in the season, you’ve got to go for everything when you’re running for the championship. If we would’ve crashed there, it is what it is; we’re going for the win. Once I squeaked by Buddy there, I knew that was going to kill his momentum. So, I knew if I could squeak by him there, he’d be all chocked up getting off four there. There weren’t many laps left there, so I just needed to make those perfect and not make any mistakes and get ourselves to the finish line first.”