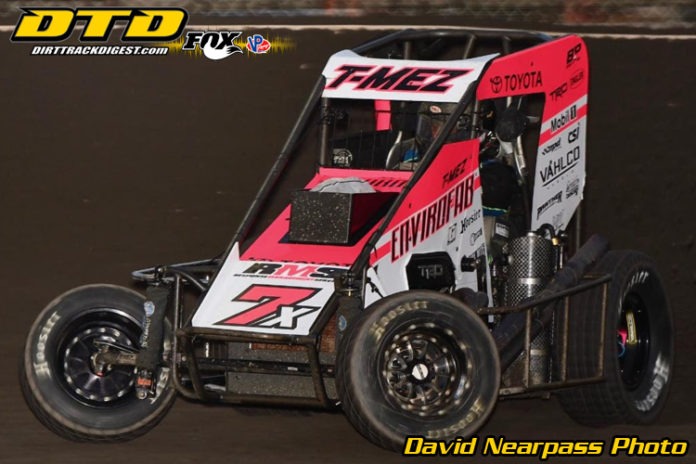 HAUBSTADT, IN – In his two-plus decades of racing with USAC, one piece of the puzzle had been surprisingly absent from Thomas Meseraull’s resume – a NOS Energy Drink National Midget points-paying feature victory.

After many a close call throughout his career, Meseraull finally sealed the deal Saturday night during Harvest Cup at Haubstadt, Indiana’s Tri-State Speedway, but once again for him, it didn’t come easy.

With an overheating engine and smoke pouring from the headers during the final laps, Meseraull became bottled up in traffic, then withstood a last lap, last corner surge from Tanner Thorson to win by a single car length at the line, with a margin of 0.119 sec. to spare, in his Response Management Services/EnviroFab – Guess Performance Parts/Spike/Speedway Toyota.

While the San Jose, Calif. driver had previously won at Irwindale (Calif.) Speedway in 2004 and at the Southern Illinois Center in 2018, both victories were non-championship, special events for USAC Midgets, making this a long-awaited night for Meseraull to mark his initial tally in the series’ win column after making 89 feature starts since his 1999 debut. Furthermore, he provided RMS Racing with its first ever USAC National Midget feature win in one fell swoop.


“To officially get my first USAC National Midget win here is crazy,” Meseraull admitted. “The RMS Racing No. 7x has been really good all year. We just haven’t had the finishes to show for it. I feel like in the last four USAC shows, we’ve had the fastest car on the track but just got caught up in wrecks.”

In each of his past two series starts at Gas City and Kokomo, Meseraull was running inside the top-five when trouble ensued, collecting him in a pair of incidents not of his own doing. Last year’s Harvest Cup saw Meseraull lead three laps late, and while battling for the lead, he and Jason McDougal tangled, sending Meseraull backwards into the outside turn four wall.

But that was last year, and Meseraull was determined to change course and find redemption on this night. Starting 7th, Meseraull was on the move early despite a flurry of stoppages that halted competition early and often during the 30-lapper. Cannon McIntosh was first to find chaos, banging the outside boiler plate on the opening lap that sent him flipping between turns one and two. He emerged from the wreckage uninjured.

Cole Bodine led the opening three laps from his outside front row starting position and was operating in the top spot on lap four when he spun on his own accord in turn two. Fourth-running Chris Windom was unable to avoid the mishap and T-boned the stopped Bodine.

While Bodine restarted from the tail and finished 11th, Windom’s car suffered front end damage that required a little more TLC in the work area before rejoining the field a lap down, ultimately finishing 16th and falling behind by 15 points to Tyler Courtney in the series’ championship race.

McDougal, the 2019 Harvest Cup Midget winner, inherited the race lead for the lap five restart. Meseraull, riding third behind Justin Grant at the drop of the green, used the opportunity to slide by Grant for the 2nd spot in turn one. Grant then reclaimed the runner-up position with a slider of his own in turn three before Meseraull clamped down to repeat his tactic from a lap earlier in turn one to stick the position on the fifth circuit.

When Chase Randall stopped atop turn three on lap eight, that created another restart opportunity for Meseraull who made the most of the chance by immediately sliding underneath McDougal entering the first turn. Another restart on the 11th lap didn’t faze Meseraull as he opened his lead up to two seconds in the ensuing laps while McDougal and the surging Kyle Cummins, who had won the night’s MSCS Sprint Car event just prior to the Midget feature.

“I feel like I was just better on starts,” Meseraull explained. “My car takes off better, and once I got rolling, it was pretty beautiful the way the car was working. It was actually carrying the right front down the straightaways and I could run right on the curb wide open, no lift. It was beautiful.”

McDougal and Cummins proceeded to entertain the onlookers with copious amounts of slide jobs back-and-forth for three straight laps before Cummins prevailed with the position on the 14th lap, then moments later, 7th running Daison Pursley found the wall in turn four, flipping him over. Pursley was uninjured.

Throughout the second half of the race, Meseraull continued to stretch his lead out to more than a second over Cummins, then Friday night’s Wayne City, Ill. winner Tanner Thorson, who took over 2nd from Cummins with just three laps remaining.

Meanwhile, Meseraull was as fluid as water up front. However, like water, he began to get bottled up in traffic with two and three-wide battles clogging up the main artery he’d been utilizing topside around the 1/4-mile dirt oval. Meseraull hunted and searched but chose to remain loyal to the top on the final set of corners for the last lap.

“We got to lapped traffic with just a few to go, and really, I wasn’t that good on the bottom,” Meseraull said. “I was only good on the top and traffic held me up.”