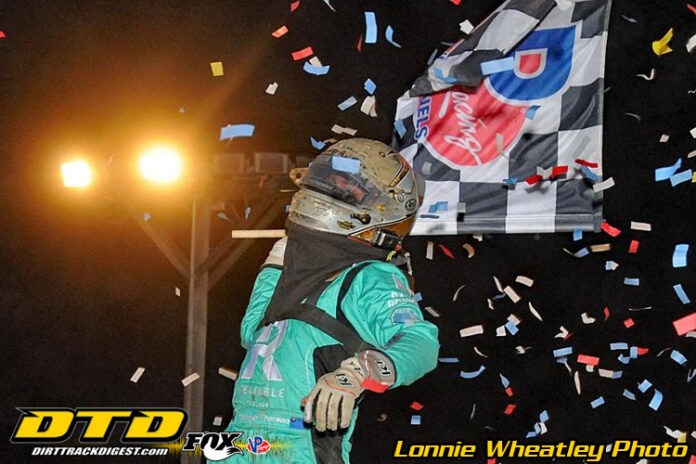 SAN TAN VALLEY, AZ – For the final push to victory on the green-white-checkered finish of Friday night’s USAC NOS Energy Drink National Midget feature at Arizona Speedway, most eyes were affixed on the front two of Logan Seavey and Buddy Kofoid as the pair streamed into turn one.

By the time those two reached the second turn, it was, instead, Tanner Thorson who combed the bottom of turns one and two, driving past both Seavey and Kofoid to secure the lead en route to bringing home a 19th career series victory, tying himself with Jerry Coons Jr., Stan Fox and Jason Leffler for 34th all-time.

“That’s what it’s all about right there, those last few laps and having a car to win,” Thorson exclaimed in victory lane after capturing the opener for the 53rd annual Western World Championships presented by San Tan Ford. “We concentrated really hard to set up for the end of the race. After I got screwed around for quite some time, we had a fast car, but we were too back.”

Outside front row starter Kofoid controlled the pace for the first four trips around the 1/3-mile dirt oval until Thorson, of Minden, Nev., took to the top on the fifth circuit, drifting around the outside of Kofoid at the exit of turn four to lead a single lap by a wheel before Kofoid retook over amidst a flurry of sliders that also included Seavey.

The rapidly emerging Seavey, who had earlier set a new one-lap track record for the series at Arizona Speedway in qualifying, which broke his own record from the previous year, diamonded off the third turn to slip under Kofoid on the 10th lap. While Seavey just missed out on winning the race to the start/finish line, he did win the race to turn one where he assumed the lead and established his dominance throughout the final two-thirds of the 30-lap contest.

Kofoid moved back past Thorson for the runner-up position on the 12th lap, then separated himself from Thorson by over a second while still remaining a second-and-a-half behind Seavey who was carving his path through traffic, a half-straightaway ahead of Kofoid.

Seavey appeared headed for surefire victory, taking the white flag with a 1.643 sec. interval over Kofoid when 13th running Brenham Crouch, who started on the pole, stopped in turn two, just ahead of Seavey of the oncoming Seavey, thus setting up a two-lap dash.

As the green flag dropped, Kofoid immediately moved down a lane on the front straightaway, setting up his slide job into turn one, which initially worked until Seavey crossed over and dove back underneath Kofoid for the position. To Seavey’s chagrin, the cross over move only brought him back to the second spot as Thorson snuck under both with the lead now in his hands.

Moments later, Kofoid slid Seavey back in turn three with Seavey once again crossing over off the fourth corner and denying Kofoid the spot. However, it was just a little too late with Thorson stretching his lead out to four car lengths by the time they’d hit the back straightaway.

Thorson closed it out with a 0.469 sec. margin of victory in his Tom Malloy/Trench Shoring – Ed Pink Racing Engines – Rodela Fabrication/King/Ed Pink Toyota. It was the 2016 USAC National Midget champion’s series-leading sixth feature triumph of the season. Logan Seavey, Tyler Courtney, Buddy Kofoid and Daison Pursley rounded out the top-five at the finish.

The first four of Thorson’s six 2020 victories came aboard the Hayward Motorsports ride. In five starts with Tom Malloy’s machinery, Thorson has finished 4th, 3rd, 1st, 2nd and 1st, making the pairing the most successful in this stretch that began in late September.

“This car has been fast every time I’ve been in it,” Thorson said as he celebrated via phone with 2014 Western World Midget winner Darren Hagen. “We’ve run five times and we’ve been in the top-five every time and won two races. I can’t say enough about Jerome (Rodela), Chris (Tramel), Brinton (Marvel), Ed Pink, Tom, and all of Tom’s family with Trench Shoring. They’ve given me the opportunity to come out and run with them and it’s paying off. I’ve got to thank Reliable; he allows me to go out on the road and do this, so it’s pretty awesome.”
Logan Seavey led a race-high 19 laps but saw victory slip away on the final restart in his Reinbold-Underwood Motorsports/AME Electrical Contracting – ZMax/Spike/Stanton SR-11x.
“Overall, we had a good car, ran a good race and I felt like I did my job,” Seavey stated. “Under yellow, the thing just wouldn’t take off. I knew it wasn’t going to take off. I took off in turn three and it never went until about the flag stand. I didn’t have the gear to run the bottom, so I knew I couldn’t go to the bottom and I knew I was going to get slid in one. But I thought I had enough to turn down and cross (Kofoid) over, which I did, but it just gave Tanner (Thorson) too good of a run on the bottom.”

“It’s just frustrating,” Seavey continued. “It’s November and we can’t get these things to take off on restarts. Our car was good under green, but you’ve just got to be able to get away from those guys on restarts and we couldn’t do it, just couldn’t put the whole race together.”

A third-place run after starting 13th on the grid was as good as gold for two-time Western World Sprint Car champion Tyler Courtney who gained ground in his quest toward a second consecutive USAC NOS Energy Drink National Midget driving title, and now leads Chris Windom by 32 points with four races remaining in his Clauson-Marshall Racing/NOS Turbo – ZMax/Spike/Stanton SR-11x.

“It was a great night, going from fifth to third there (on the final restart) is good for the big picture things,” Courtney said. “Obviously, you want to win, but it’s tough when you start 13th. That just put us behind the eight ball. We haven’t qualified bad all year until we got here, but I think we figured out a lot of things to help us out for tomorrow so that we can start our night out better and put ourselves in a spot to be able to contend for the win instead of having to salvage a third.