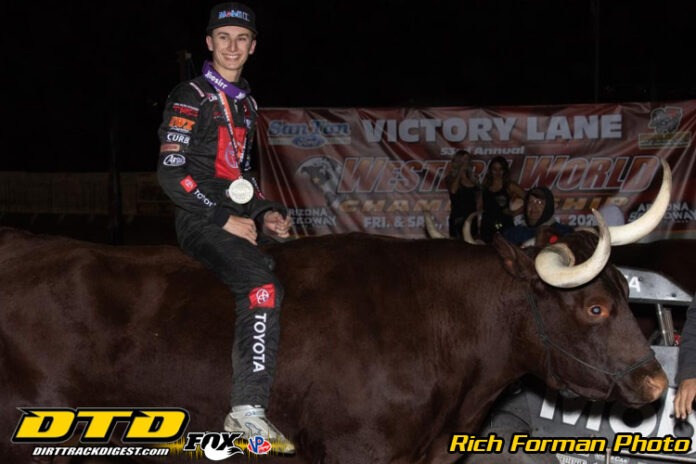 That accomplishment was realized Saturday night when the Penngrove, Californian led wire-to-wire from his outside front row starting spot, then withstood a steady challenge from previous night’s winner Tanner Thorson, as well as a late-race restart, to capture his second career series victory in his Keith Kunz-Curb-Agajanian/Mobil 1 – JBL Audio – TRD/Bullet By Spike/Speedway Toyota at the event presented by San Tan Ford.

“It’s a good feather in my cap,” Kofoid stated. “For Western World, this is the 53rd annual, and a lot of big names have won here, so I’m glad to add mine to that. Nothing beats winning.”

Kofoid got the jump on the opening lap to rip past pole sitter Robert Dalby while KKM teammate Tanner Carrick followed in his wake on the high side just behind to procure second.

As Kofoid extended his lead to three-quarters of a second during the first third of the 30-lap feature, Clauson-Marshall Racing’s pair of machines each found their share of hardship, with 17th running Cole Bodine dropping out on lap 10 with a cloud of smoke surrounding his ride while, two laps later, fourth-running and point leading Tyler Courtney dropped off the pace and pulled into the infield with mechanical problems of his own, which wreaked havoc in his quest for a second consecutive series championship, dropping him to second in the standings.

As Kofoid carved his way through lapped traffic, one instance nearly spelled disaster with 13 laps remaining. Kofoid attempted to slide past teammate, 17th place Brenham Crouch, in turn four when the two made contact, sending Crouch backwards into the outside retaining wall, closing the curtains on his night, while Kofoid continued unscathed.

Shortly after the resumption of the event, Carrick, who had run in the second position for the first 17 laps, began to fade then slow to a sudden halt when his left rear tire went flat on the 20th lap, forcing those behind him to take evasive action to avoid getting caught up in the ordeal. The 2019 USAC National Most Improved Driver returned to the fray after replacing the rubber in the work area, ultimately finishing 10th.

Thorson was able to mount a challenge to Kofoid in the first couple of laps following the lap 20 restart, creeping to within a single car length of the leader on the bottom in turn two, but unable to edge ahead for the time being while Daison Pursley, showing no ill effects from his flapping right side panel, was hustling in third and ferociously shrinking the gap.

The first red flag of the weekend for the midgets occurred on the 24th go-around when 16th running Noah Gass took a vicious high flyer into the turn two catch fence before landing upside down on the surface of the 1/3-mile dirt oval. The Mounds, Okla. driver walked away from the scene under his own power.

When the green flag dropped, Kofoid drew his car low into turn one while Thorson took to sweeping the top, then angling a slider into turn three, drawing closer to the lead on the 24th and 25th laps before dropping to the bottom in turn one on the 26th where he lost a parcel of real estate to Kofoid that added up to around a half-second when the second red flag of the night was displayed for 9th running Chase Randall who barrel rolled in turn four, ending his evening.

The incident set up Thorson in a fairly familiar spot. Rewind to 24 hours prior when Thorson raced from third to the lead on the first lap of the restart during a green-white-checkered finish, one of whom he passed was Kofoid. On this night, Thorson had one more lap and one less car to pass. However, once Kofoid got rolling, he never allowed Thorson a chance at that opportunity as he blitzed away over the final three laps to finish out a 0.566 sec. victory.

Kofoid was followed to the line by Thorson, Pursley, Chris Windom and Spencer Bayston.

While Kofoid lamented the missed opportunity from the night before, he took that as a learning experience for he and the crew to find that little extra oomph to push them to the top.

“I was in a position to win last night,” Kofoid recalled. “I knew we had good speed yesterday and we kept working on it. I knew our slick track and main event set up was really good and we just improved on it a little bit.”

Kofoid had competed previously at Arizona Speedway over the years, one of which was an ASCS Southwest Region winged sprint car race where a couple years earlier in 2018, Kofoid battled a familiar foe who was on his side guiding him to victory this night in 2020.

“My crew chief, Jarrett Martin, is from 40 minutes away from here, so to get him kind of a home track win with USAC is really cool,” Kofoid said. “It’s kind of funny, two years ago, him and I ran the Copper Classic together at this track, and then it wasn’t until this year, we realized we raced against each other. I can’t thank the crew enough for all their hard work and Keith Kunz/Curb-Agajanian Motorsports, Mobil 1 and Toyota for a really great opportunity to drive fast racecars.”

“It just shows how strong these cars are and the group of people that I have behind me,” Thorson said. “With Reliable, Factory Kahne Shocks, Trench Shoring and Ed Pink Engines, I’ve got a pretty awesome piece behind me. Everybody that is backing me and allowing me to do this, I can’t thank them enough. We’ll take our speed over to Bakersfield (Speedway on Tuesday) and try to pick off one.”

Pursley (Locust Grove, Okla.), who, like Kofoid, made his very first USAC NOS Energy Drink National Midget start one year ago during Western World. One year later, Pursley was standing among tall cotton after equaling his best career series finish with a 3rd place result in his Keith Kunz-Curb-Agajanian/Craftsman – JBL Audio – Mobil 1/Bullet By Spike/Speedway Toyota.

“To come home third to Buddy and Tanner is nothing to hang your head about,” Pursley admitted. “It was my first time on a big track here and it’s a cool place. I wish I could’ve have had a few more laps coming in. I’m thankful for third and I can’t thank the entire Keith Kunz Motorsports team enough. They put a good car together and I’m grateful for the opportunity to get to drive it.”

With Courtney’s troubles, a runner-up finish by Thorson and a 4th place run for Chris Windom, the USAC NOS Energy Drink National Midget points race has taken a drastic turn after Western World, and with now just three events remaining. Courtney went from a 32-point lead to an 11-point deficit behind new leader Windom. Thorson, who trailed by a distant 71 points entering Saturday, is now just 32 points out of the lead coming into the Tuesday, November 17 round at Bakersfield (Calif.) Speedway, the NOS Energy Drink November Classic.