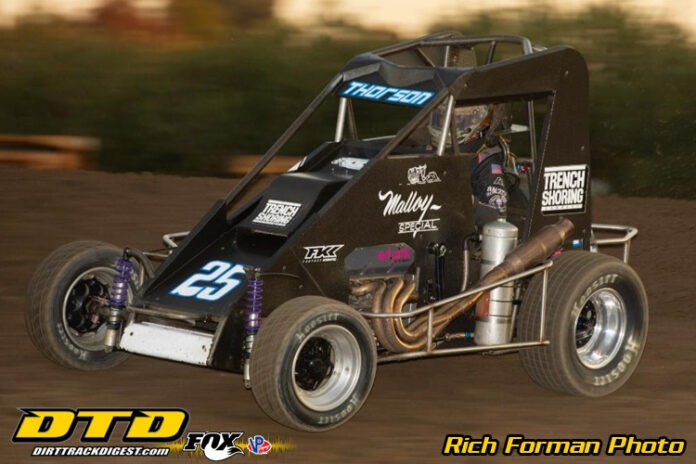 Of all his great performances in 2020, Thorson very well may have saved his best for last, going tit for tat in a racelong clash between he, Tyler Courtney and Buddy Kofoid that saw each driver rotate their turns as the race leader in the final six laps of Saturday night’s season finale at California’s Merced Speedway.

Thorson (Minden, Nev.) led the final four to earn his season-leading seventh win, etching his name into the record books as just the sixth driver, and the first in 20 years, to win both the first and last race during a USAC National Midget season. Thorson won the season opener in February at Bubba Raceway Park in Ocala, Fla.

The victory for Thorson aboard his Tom Malloy/Trench Shoring – Ed Pink Racing Engines – Rodela Fabrication/King/Ed Pink Toyota was worth $5,000 after sponsor Elk Grove Ford elevated the winner’s share by an extra $2,000 earlier in the evening. To earn the accolades, the “w” and the money, Thorson affixed his focus on the basics, the mental aspect of racing, that he felt he had strayed from in recent outings.

“I just tried to keep my composure and hit my marks,” Thorson explained. “It’s something that I feel like, over the last couple of races, I’ve lacked – hitting my marks perfectly and making sure I get through the turn right. I feel like my car has been so fast here lately, I kind of went away from concentrating on hitting my lines and making it manageable. It’s something I knew I needed to focus on and make work.”

Thorson went to work on his 30-lap mission from the outside of the second row, but trouble ensued mid-pack just as the wheels were set in motion with Chase Johnson taking a lap one, turn one tumble that also collected Zeb Wise. Johnson’s first ride in the Bundy Built Honda, normally piloted by Ethan Mitchell, came about due to extensive damage received in a Friday night crash at Merced in his regular ride, the Tom Malloy-owned No. 25c. Johnson was credited with the 24th finishing position while Wise restarted and finished 19th.

Pole sitter Kofoid grabbed the top spot on the complete restart, a lead which he held for the first 14 laps despite repeated shots fired from outside front row starter Courtney while Thorson would soon enter the fray, finding his rhythm right around the inside berm.

As Kofoid ringed the topside as smooth as silk, the bottom-feeding Thorson found a sudden surge exiting the fourth turn to close within a wheel of Kofoid at the stripe on the 14th lap, then completed his overtake of the position off turn two moments later on the 15th trip.

A bump of the turn two bottom berm on the 18th circuit allowed Kofoid to break free of Thorson for the time being and open up a five car length lead while Thorson briefly ventured away from the bottom, tucked in behind Kofoid on the curb.

Meanwhile, Courtney, who had been lying in the weeds in third behind Kofoid and Thorson for the past 15 laps, suddenly decided it was “go time” in this non-stop 30-lapper that went green to checker without a yellow following the complete restart, splitting between Thorson to his left and Kofoid to his right in turn three, with Kofoid ultimately edging Courtney by roughly the thickness of the chrome on his front bumper at the line.

Kofoid’s reign at the front was in constant peril, and when Courtney got to the inside of Kofoid midway down the back straightaway, Kofoid attempted to slam the door on Courtney entering turn three with both banging their wheels off one another and Courtney leveraging his way past Kofoid off the fourth corner to position himself into the lead.

Kofoid slid past Courtney a tick later in turn one to regain the position and lead the path on lap 26, then once again, maneuvered his way back to the bottom to prevent the retaliation slider.

As eyes were peeled on Kofoid and Courtney nose-to-tail at the top of turn three on lap 27, Thorson casually snuck by both on the bottom, leading a three-wide formation at the start/finish line with Courtney to his inside and Kofoid to his outside all separated by within a half-car length.

Kofoid tried with all his might to grapple his way back into contention with Thorson while utilizing the top, but Thorson ably obtained a little bit of ground on Kofoid when he disposed of the lapped car of Bryant Wiedeman in turns one and two coming to the white flag.

However, Kofoid tried to one-up Thorson by double-dipping with a slider of both Wiedeman and Thorson in a single turn three slide job, successfully discarding Wiedeman but coming up just short of Thorson, opting to fall in line to regroup and give ‘er her one more try.

On the final lap, Kofoid was unable to get close enough to make another attempt at a slider, only enough to nestle right to the rear bumper of Thorson as he raced to the finish line 0.130 sec. ahead of Kofoid with Courtney third, fast qualifier and new one-lap track record holder Kyle Larson fourth and Spencer Bayston fifth for the third consecutive race.

The fast-paced race, which lasted a total time of 7:18.810, was the first and only uninterrupted feature that went green to checkered, from laps 1-30, with the series this season. The five total lead changes were the most in any USAC National Midget feature this season as well.

In the end, it was Thorson, who led three laps midway but settled in and found a sense of serenity to battle his way back to the front, and ultimately, prevail.

“When I started hitting my lines, I was able to run down Buddy (Kofoid) pretty fast,” Thorson recalled. “I got mixed up with some lapped cars and kind of messed up on the berm one time, but once I regained my composure, it all fell into place.”

It was a 2020 season unlike any other for Thorson, and a season unlike most for any driver in the course of USAC National Midget racing history over the past 65 years. His first four victories this year came for Hayward Motorsports, and since joining Tom Malloy’s team in late September, Thorson has reeled off three more wins, making him one of just five drivers to win at least three races for two different teams in a single season in USAC National Midget history.

Parnelli Jones was the first to do the deed in 1963 for Marv Edwards and Howard Linne. Mike McGreevy is the only driver to accomplish the feat twice, first in 1965 for both Jack London and the Kenyon Brothers, then again in 1969 for owners Howard Linne and Ed Lark. Rich Vogler’s 1988 championship season include 11 wins for Wilke Racers and five for Jonathan Byrd. Jay Drake had been the most recent with three each for Ralph Potter, then Keith Kunz in 2000.

“At the end of this year, we’ve been really strong and it all comes down to the people that surround you and who works on the car as well as the shocks and motors,” Thorson said. “Having fun and enjoying what you do, that’s what drives me harder more than anything, even more than even having the baddest car on the racetrack. It’s just the people around you and what you can do with such a great mindset. I’ve got the best mindset out there as far as winning and having fun at the same time.”

Of course, when you’re winning, it’s much easier to have fun, and in what was Thorson’s first ever weekend competing at the 1/4-mile Merced Speedway, his fun included joining several notable lists of achievements while also ending the season on the highest of notes, which gave Thorson an opportunity to think back on those who helped him get to this point.

“I’ve raced with some pretty awesome people,” Thorson reminisced. “I got the majority of my USAC wins with Keith Kunz and that’s where I learned the ropes of midget racing. And then, Darren Hagen, I lived with him when I grew up, and he showed me the way around about just how racing was and what I needed to do, and it’s all helped pay off in the end.”

Buddy Kofoid (Penngrove, Calif.) finished a highly-impressive Rookie season with the series fourth in the standings in his Keith Kunz-Curb-Agajanian/Mobil 1 – JBL Audio – TRD/Bullet By Spike/Speedway Toyota, earning three total victories, two of which came on the November western swing, and rounding up the season with a second-place result. The Healing Tree added a $1,000 for the runner-up, bumping Kofoid’s total earnings to $2,500 for the night.

**Thomas Meseraull flipped during the second heat. Chase Johnson flipped on lap 1 of the feature.