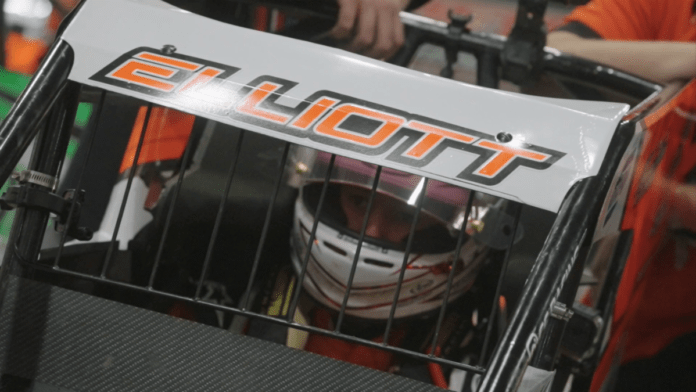 SPEEDWAY, IN – For Chase Elliott, the interest to jump into a midget was practically immediate as soon as he began applying his attention toward it, coinciding with his rise up the NASCAR ranks where he ultimately became a first-time Cup champion in 2020.

Elliott, of Dawsonville, Ga., was recently named the driver of the CB Industries No. 84 for the season opening USAC NOS Energy Drink National Midget events this weekend on Feb. 5-6 at Bubba Raceway Park in Ocala, Fla.

The son of 1988 NASCAR Winston Cup champion Bill Elliott rose to fame in the racing ranks away from open wheel dirt track racing world, but through a sponsorship connection and an eye on the racing world around him, Elliott found that midget and sprint car racing had made an impact on him.

“I’ve been keeping up and watching midget racing for the past four or five years along with the sprint car side of things, keeping up with Brad Sweet in the World of Outlaws with our NAPA connection. So, I kind of keep an eye on him,” Elliott said. “Since Kyle (Larson) came over to Hendrick Motorsports, I’ve talked to him about it. In recent years, I’ve kept up with it, been more aware of it and try to watch the races online when I can.”


Almost instantly, Elliott’s desire to step into the driver’s seat of a midget grew, but conflicts with his busy racing schedule, time and effort, he admits, were the roadblocks in the way of making the leap. That is, until late in 2020, when all the stars aligned to open the door for his initial midget start at North Carolina’s Millbridge Speedway, then onto the Chili Bowl, and now to his initial appearance with USAC to start 2021.

“I’ve been interested in getting into a car for the same amount of time as I’ve been keeping up with it,” Elliott revealed. “Just the way this past year went, I had a chance to go drive at the Chili Bowl and run the race at Millbridge there at the beginning of December. All that stuff kind of aligned and I felt like it was the right opportunity to get in there and go. Prior to that, I hadn’t really put in the right amount of effort to go make it happen, but this past Fall, it kind of came together and I was ready to give it a shot.”

Elliott snagged third and fourth place feature finishes at Millbridge in December 2020, then contested January’s Chili Bowl Midget Nationals in Tulsa, Okla., where he narrowly missed out on the final transfer spot to the feature in his preliminary night B-Main.

From the first time he set foot in a midget ’til now, the difference is stark, and Elliott has found an increased sense of comfort as he prepares for another test and continues his quest of learning this type of racing discipline on the fly.

“It’s grown a lot,” Elliott said of his comfort level in the midget. “Am I exactly where I need to be? I would say definitely not. But there’s only way to get better and get comfortable, and that’s to go race. The Chili Bowl was a good experience for me, being around these cars and those racing environments.”

“Millbridge was good and was a great introduction for me, but the Chili Bowl was more of that cutthroat, quick racing where it’s a ‘move forward or you’re in trouble’ type of environment in a short period of time,” Elliott continued. “That’s really how I feel a lot of dirt racing is throughout the year. Hot laps are quick, heat races go by fast, and the next thing you know, it’s race time where you can either move forward or you’re in trouble. That intensity and sense of urgency I feel like was more at that event. That’s one thing different from asphalt racing; you really have to get after it in a hurry.”

Elliott not only has good equipment for his USAC debut, he has the reigning USAC NOS Energy Drink National Midget owner and driver champions in Chad Boat and Chris Windom, respectively, to work alongside.

“It will be helpful for me,” Elliott acknowledged of getting the opportunity to work with Boat and Windom. “I’ve had great people to lean on all throughout this journey, through Millbridge and to the Chili Bowl. Fortunately, for me, it hasn’t been for a lack of help from the right people. I’m very fortunate from that standpoint. I do think being surrounded by the right people and knowing that they’ll speak up when they need to and try to give you the right direction to help you learn, that’s all you can really ask for from that standpoint.”

“At the end of the day, I’m not sure how quickly I’ll be able to speed up the learning curve. That’s up to me to either make it happen or not,” Elliott added. “You can only tell somebody how to drive, so much. Then, it just comes down to do the right things and that’s up to me and I get that.”

Although Elliott revealed that his USAC Midget racing schedule is fluid at the moment, he displayed no hesitation in saying he wants to continue to do more when his availability allows. His interest in pursuing midget racing in his spare time is at a peak level and he’s eager to discover all the intricacies to dirt racing, and the only way to do that is to race.

“I respect the discipline and I think it teaches you good habits,” Elliott said. “These cars are hard to drive and dirt racing, in general, is fun with how the track changes, being up on that, and knowing what the dirt is like in different parts of the country and what it does throughout the race from the beginning of hot laps until the end of the feature. Those are things that make great dirt racers great. I feel like the only way to go and improve at this is to do it more. That’s why I’m going.”

Elliott hits the track for his first USAC NOS Energy Drink National Midget appearances in the series openers on Feb. 5-6 at Bubba Raceway Park in Ocala, Fla. Grandstands open at 5pm ET each night with cars on track at 6pm.

A dedicated practice night will precede the festivities on Feb. 4 from 6-9pm ET.