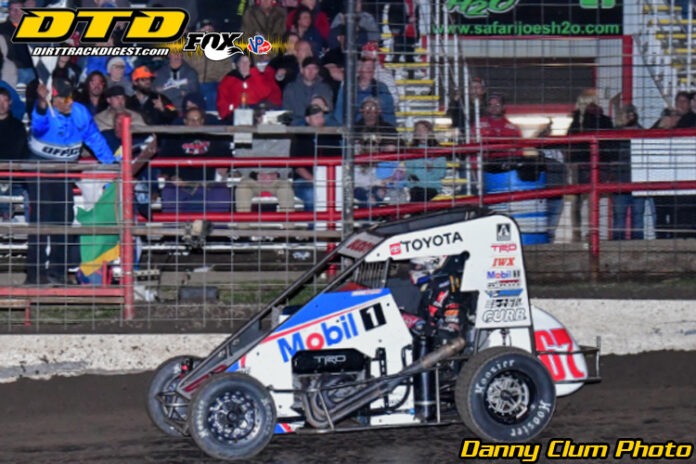 TULSA, OK – At a track he described as his personal kryptonite following his first visit a year ago, Buddy Kofoid played the part of Superman to a T Saturday night at Port City Raceway, charging his way from his 16th starting position to win the 50-lap opener of the Werco Manufacturing T-Town Midget Showdown presented by the Rayce Rudeen Foundation.

For his efforts, Kofoid (Penngrove, Calif.) earned $8,151 all in a night’s work at the Tulsa, Okla. 1/8-mile dirt oval, the largest payday of his USAC NOS Energy Drink National Midget career thus far.

Kofoid became the third different driver in as many years to win two of the first three USAC National Midget features to begin a season, following Tyler Courtney in 2019 and Tanner Thorson in 2020. Kofoid also won the season opener in February at Ocala, Florida’s Bubba Raceway Park in the Keith Kunz-Curb-Agajanian Motorsports/Mobil 1 – TRD – IWX/Bullet By Spike/Speedway Toyota.

In his debut at Port City in 2020, Kofoid finished 8th and 11th on each of the two nights, which he readily admitted were not up to par with his expectations. Those expectations were undoubtedly met, and exceeded, on this particular night.

“I’m glad to be the first repeat USAC winner, but to also win at a track that bit us, or at least that we struggled at. It was our kryptonite, a little bit,” Kofoid explained. “Jarett (Martin), Grant (Penn) and Andrew (West) did a really good job with the car. We’ve found so much speed. This is the same car I ended last year with; it’s kind of old faithful, and it’s just going really good.”

Kofoid qualified three cars from the end of the line in the 48-car field, clocking in 13th fastest overall, but felt his best opportunity was to win the heat in order to secure a surefire top-ten starting spot. Instead, the plan came up one spot short, finishing 2nd to Tyler Thomas in the first heat and relegating him to a 16th place starting spot on an elbows up, no rest for the weary type of racetrack.

“When I saw that I started 16th, I thought, ‘oh this is going to be tough. Hopefully, we can get a top-ten out of this.’”

Kofoid didn’t spend much time getting himself acclimated to the back, climbing his way into the top-ten by lap four while Logan Seavey, a hard charger himself from 19th to 2nd a year ago at Port City, led the way at the head of the field.

Trouble was in the cards for several in the early going with Tyler Thomas clipping a sideways Ryan Timms on the third lap while racing for 8th, which sent Thomas flipping in turn three. Thomas restarted from the tail, but retired from the race shortly thereafter, finishing 24th.
On the ensuing restart, defending series champion and 3rd place running Chris Windom spun in turn two, collecting Kevin Thomas Jr. in the skirmish. Both restarted from the back with Windom charging up to 12th and Thomas up to 10th.

Daison Pursley, a micro sprint winner just prior to the start of the midget feature, was on a mission early, climbing his way into 2nd on the bottom when he clipped a turn four infield tire, nearly causing him to flip. Once he landed on all fours, it was apparent that his left rear tire was flat, sending him to the work area before returning to finish 13th.

Ryan Timms, making his first career series start, became the newest challenger to the throne, sliding by Seavey briefly for the lead in turn three on lap eight. Justin Grant snuck under Timms for the position three laps later on the 11th circuit, sending Timms back to third with a surging Thomas Meseraull on the trail just behind in fourth.

On lap 13, disaster struck for Timms as Meseraull attempted a slide job under Timms entering turn three. The resulting meeting of wheels involved contact between the two, which sent Timms flipping hard toward the outside wall while Meseraull escaped with the position. Timms’ night was finished with a heavy amount of right front damage.

The surface was tricky with Seavey rolling the bottom in turns one and two and riding the cushion at the top in turns three and four, while Meseraull surpassed Grant and stayed tried and true to the high line – for the most part. Meseraull took his shot at Seavey for the lead with a slider in turn three but couldn’t make it stick as Seavey drove back underneath the 2018 series champ exiting turn four.

With Meseraull and Grant mired in a tussle for second, the duo of Cannon McIntosh and Buddy Kofoid barged into the top-five fray, surrounded by a mix of frontrunning foes and lapped traffic. McIntosh, who earlier had set the fastest qualifying time, and was now fourth in the order, ultimately saw the demise of his quality performance as he and 22nd running Brenham Crouch made contact while trying to squeeze to the bottom of turn one, sending McIntosh into a spin and stop. After restarting, McIntosh finished 8th.

Under yellow, when all seemed to quiet down on the western front, race leader Logan Seavey stopped in turn two with a battery issue. He eventually was able to refire, albeit briefly, for the restart at the back of the pack, but dropped out just laps later with a 21st place finish.

With Kofoid now running second, and figurative blood in the water, he raced his way past Grant on the bottom in turn three one lap after the restart on the 29th circuit to snare the lead, while Meseraull too sped around Grant on lap 32 for the second spot. Yet Kofoid felt like he had on Superman’s cape, with his car able to go anywhere he wanted, any place, any time.

“I was good on the top early when people didn’t really recognize that the top was good, especially in three and four,” Kofoid revealed. “I moved down at the right time on the bottom, and then found the bottom in three and four out front by myself, and I was able to use that to pick off some of the leaders, then I was able to move back to the top of three and four. At the end of the day, I could move around wherever I wanted.”

Although Meseraull was able to continuously hound Kofoid for the lead between laps 30 and 39, by lap 40, Kofoid had completely stretched his lead out to a full second, an interval which remained consistent despite a bevy of competition standing in his path on his preferred line. But Kofoid was able to freely move his car to where he needed to put it with pinpoint precision to maintain his relatively comfortable advantage.

Kofoid noted that he simply found the different areas of the track at just the right time, and at the end of the day, he was just going to go where they weren’t.

“Starting 16th with USAC, alone, at any track is tough,” Kofoid said. “But, especially here at Port City where it’s one of the smallest tracks we go to and one of the closest and hardest racing tracks. You can never get away from anyone, as opposed to bigger places where you can kind of check out. But here, it feels like you’re always in some kind of constant battle.”

Kofoid prevailed in every battle on this night, closing out his victory with a 0.808 sec. margin of victory over the late-surging Brian Carber, who was making his first career USAC National Midget appearance. Meseraull took third while Jason McDougal was fourth and Justin Grant rounded out the top-five.

The hot start, the series point lead and complete, total confidence has provided Kofoid a clear focus on his prevailing goal, which has never wavered in what he has considered to be the best start to a season in his career so far.

“My focus is the championship,” Kofoid said. “I want nothing more than to win a USAC national championship. We’ve started off right, and there’s some things we’ve got to work on, but we’re heading in the right direction and our cars just race really good.”

“This place blew off and got really wide, and there’s a lot of guys that can rotate the top pretty well,” Carber said. “We had some difficulties throughout the race, but I started working the shocks and began to migrate to the bottom and just set it up for the bottom. I followed Buddy (Kofoid) in the beginning, and he knows how to race. This SR-11, it honks, and I’m pretty proud of the whole team and everyone that’s on this deal. I’m just grateful for the opportunity to be here.”

Thomas Meseraull (San Jose, Calif.) had an eventful evening as he wrestled at the front in his RMS Racing/EnviroFab – Response Management Services – Engler Machine/Spike/Speedway Toyota, riding the high line as long as it lasted en route to a third-place result.

“You pretty much just hang your elbows up and go for it here,” Meseraull said. “I’m pretty stoked at that run. When it goes to the bottom, you don’t expect T-Mez to win races. I was up there just trying to sell shirts.”

Also of note, Joe B. Miller (Millersville, Mo.) raced from the C to the B to the A where he finished 7th in Saturday night’s feature. Along the way, Miller passed a total of 30 cars to take the lead of the ProSource T-Town Midget Showdown Passing Master standings entering Sunday’s finale at Port City.