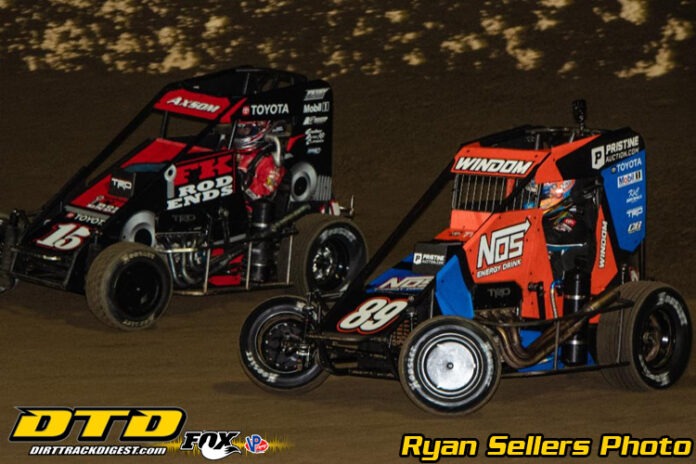 Less than two years later, in Friday night’s Kokomo Grand Prix opener, Petry was a firsthand witness to one of his pilots, Emerson Axsom, experiencing his very own first career triumph with the series in the seat of one of his cars.

The 16-year-old Axsom, from Franklin, Ind., was dominant from start to finish, leading all 30 laps around the quarter-mile dirt oval in his Petry Motorsports/FK Rod Ends – Keizer Aluminum Wheels – Mobil 1/Bullet By Spike/Speedway Toyota, a win which came in just his 23rd career USAC start.

However, it was the 11th career start, back in September of 2020, which stuck in Axsom’s craw.

Despite growing up less than an hour and a half from the pit gate at Kokomo Speedway, Axsom never once turned a wheel at Kokomo Speedway prior to that race last Fall where he charged up to 4th midway through the feature before falling off the pace and out of the race when his kill switch broke.

While that particular race was one he’d rather forget, Friday will forever be engrained in the category of which he’ll always remember.

“I’ve always wanted to do what I’m doing right now; it’s a blast,” Axsom exclaimed. “I couldn’t be happier with the team I’m on and the way we’re doing it. And to do this with my dad by my side, there’s nothing better. I just can’t thank Scott (Petry) enough for this opportunity to run such a great racecar. After this, I’m even more pumped for the rest of the season.”

Young Emerson grew up racing with his father and mentor, Joe, a successful shoe in stock car racing on paved high banked racetracks such as Salem Speedway in Southern Indiana, and also an eight-time starter with the USAC Silver Crown series. Yet Emerson couldn’t resist the pull of open wheel dirt racing, attending Midget races at places like Kokomo and Eldora by the time he was 10 years old.

Axsom, himself, cut his racing teeth in quarter midgets and the amount of success was immense, winning the 2016 USAC .25 Midget Light 160 Paved and USAC .25 Midget Formula Mod Paved championships before, ultimately, making the transition to micro sprints where he scored a hefty payout in The Big Dance at U.S. 24 Speedway in Logansport, Ind. and garnered a memorable winged outlaw main event at the Tulsa Shootout.

And, as it turned out, just as it always has before, even more success was never too far away, such as it was on Friday night.

No evidence of sweaty palms or any sort of intimidation was evident in Axsom who crossed over from the outside to the inside, swiping past Windom to grab the early lead into turn one. When Windom slid back by in turn three, Axsom responded in kind by driving back under Windom at the exit of turn four to recapture the lead.

However, fourth-starting Daison Pursley doubled-up by sliding past both Windom and Axsom in one fell swoop in turn one on the second lap. Pursley’s maneuver proved short-lived, however, as Axsom raced back by Pursley at the bottom of turn three and quickly built up a 1.5 second advantage.

“I knew that if I got out front and could run my own race, we’d be good,” Axsom explained. “To pass Chris, he’s raced here a ton and he’s really good here, and I figured he’d slide me into one, so I was ready for that. Once I was able to cross him over, I just hit my marks and it worked out well from there.”

On the fifth lap, early mover and shaker Brenham Crouch, who had ridden the high line from 6th to 4th, brought out the lone red flag of the night. Crouch biked on the cushion at the entry to turn one, landed on all fours and appeared to have it saved. Nonetheless, the car continued to drift up the racetrack, smacking the right side wheels against the outside wall between turns one and two, causing him to barrel roll twice. Crouch walked away uninjured but was finished for the evening.

On the ensuing restart, several front running contenders had their shots at winning eliminated. Third running Pursley surrendered with a flat left rear tire in an incident that resulted in Buddy Kofoid (5th) spinning in turn two and collecting Kyle Cummins (6th). Pursley and Cummins spent time in the work area for repairs during the yellow period. All three restarted from the tail with Kofoid racing back to 5th, Pursley to 6th and Cummins to 12th at the checkered.

Axsom withstood a Windom slider attempt on the second lap five restart, and instantly opened up another sizable lead of nearly two seconds, with new second place runner Cannon McIntosh whittling away at Axsom’s lead. McIntosh chopped the Axsom gap to a mere second with five laps remaining, but was unable to get any closer than that, as the two frontrunners broke free from traffic and entered the clear.

Securing the victory when all was said and done was Axsom, who became the first “first-time” USAC National Midget feature winner since Thomas Meseraull in October of 2020. Axsom was followed to the line by McIntosh, Windom, Justin Grant and Kofoid.

McIntosh (Bixby, Okla.) earned, by far, his best finish of the year, taking 2nd in his Dave Mac Motorsports/DriveWFX.com – SBS Shocks – D.A. McIntosh/Spike/Speedway Toyota. His previous best finish with the series in 2021 had been 8th at Port City Raceway in Tulsa, Okla. after starting the year with three finishes outside the top-ten.

Windom (Canton, Ill.) finished inside the top-four for the fourth time in five starts with the series this season, scoring a 3rd place result in his CB Industries/NOS Energy Drink – PristineAuction.com – K & C Drywall/Spike/Speedway Toyota.

**Brenham Crouch flipped on lap five of the feature.