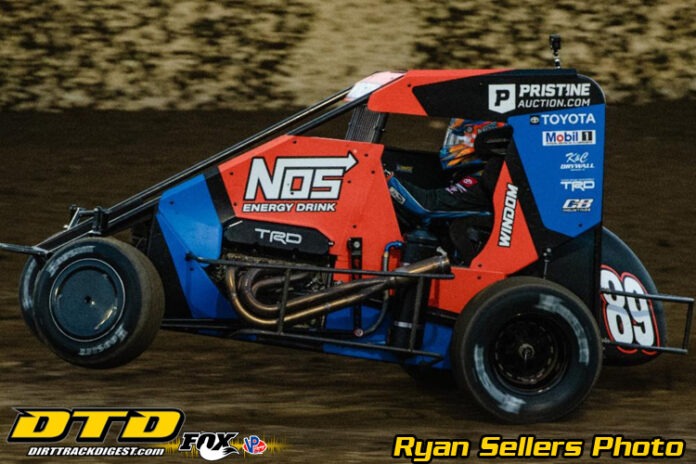 KOKOMO, IN – Through his first five USAC NOS Energy Drink National Midget starts in 2021, Chris Windom had finished 2nd once, 3rd twice and 4th on one other occasion.

Standing in front of the gates of victory, but unable to pick the lock, as fate would have it, the reigning series champ just needed to head back to the site of his most recent victory 14 races prior, to where he’s a past track champ and a frequent winner of sprint car and midget races for the past decade-and-a-half – home sweet home, AKA Kokomo Speedway.

One such feather that the Canton, Ill. native had, thus far, been unable to put in his cap, prior to Saturday night, was a triumph in the Kokomo Grand Prix where he held prior bests of 3rd in 2019 and 4th in 2014.

Nevermore, said the reigning USAC NOS Energy Drink National Midget champion, as he overtook Daison Pursley for the lead for good on the fifth lap, changed his plan of attack mid-stream when the likes of Tanner Thorson began to bear down on him, then kept a hard-charging Buddy Kofoid at bay down the stretch, to tally a mark in the win column for the first time in this calendar year in his CB Industries/NOS Energy Drink – PristineAuction.com – K & C Drywall/Spike/Speedway Toyota.

“(Car owner) Chad Boat had this thing so good to run the bottom,” Windom said. “I could run the top too when I needed to; it was a lot of fun. It’s been a frustrating year, but we’ve been wanting to win a race, and we finally got one the third weekend in.”

For the second consecutive night at Kokomo, Windom started his race from the pole position. However, he was keen on not allowing the opening laps play out in a similar fashion to the night before as it did with first-time series winner Emerson Axsom. This time, Windom outpaced outside front row starter Chase Randall into turn one, nestling his right rear tire on the sweet spot of the curb as he led the pace on the opening lap.

Soon after, third-starting Pursley emerged, occupying the bottom while Windom hung topside. The classic high/low duel quickly became an exchange of barbs on lap five when Pursley slid Windom into turn three, forcing Windom to crossover and divert low at the exit of turn four and sling back to the top past Pursley by the time the pair hit turn two.

Windom made his first commitment around the infield tires on lap seven as he panned downward in turn one. However, Pursley went even lower, and took the shorter route ahead of Windom, albeit very briefly.

By the time the duo made their way into turn three, Windom, standing three car lengths in arrears by the middle of the back straightaway, made a beeline straight from the bottom of turn three to the top of turn four, sliding just in front of Pursley, forcing Pursley to hiccup ever so slightly on the cushion, getting sideways, and lifting the front wheels off the surface, allowing Windom to slip away.

The moment was short-lived, however, when the yellow flag flew shortly thereafter for a flat left rear tire on 13th place running Ethan Mitchell. After replacing the tire in the work area during the caution period, Mitchell returned to finish 16th.

A gnarly curb saw several drivers bucking their way through turns one and two on the top side, yet Windom remained smooth as silk. Just when it appeared as if the top was the surefire bet for Windom, he hedged his bet when a charge on the bottom led by Tanner Thorson began to make the case for a different path to victory. With the pearly white nose of Thorson’s No. 19T rapidly closing and fully visible in the corner of Windom’s left eye, Windom said “sayonara” to the top and began a re-dedication to the bottom.

The move paid immediate dividends, upping Windom’s advantage from mere tenths to over a second with half of the 30 laps scored and half more remaining.

“I wanted to make the top work there early and make it interesting, but I saw those guys coming on the bottom and I had to jump down there and take the line away,” Windom explained. “This car is so good, that even though it’s so slow around the bottom, it’s just so much faster to do it. It was Just a technical track, and with how big that curb was, a midget doesn’t really run on it super well. You have to hit it perfect to be fast up there and it’s hard to hit it perfect for 30 laps. So, I got down in a safe spot.”

Pursley’s impressive run came to a shrieking halt on the 17th lap when the 4th place driver was bit by the cushion between turns one and two, which forced him onto the bike, two-wheeling his car before the right side wheels snagged and sent him barrel-rolling twice, then flipping him over once more nose-to-tail before coming to a rest, ending a relatively tough evening for the Oklahoman who also found himself upside-down in true Tommy Tipover style in practically the same spot in the third heat race.

On the lap 17 restart, Windom and Thorson stayed low while third-running Kevin Thomas Jr. and fourth-running Buddy Kofoid were the only takers of the high line who were running inside the top-ten at the moment. Thomas briefly strayed but found his way back to the bottom soon after while Kofoid was unwavering in his loyalty to the top and went about passing by means of going where everybody else simply wasn’t.

Kofoid rode the fence in turns one and two and implanted four in the fluff entering turn three to jet from 4th to 2nd in one big move on lap 21 around the outside of both Thomas and Thorson, the very same lap in which Kofoid turned the fastest single lap of the race.

Now the race was on between Kofoid, the current series point leader, and his pursuit of the defending champion, Windom. Kofoid carved down the margin to a single second with five laps remaining, but Windom was on rails and, with Kofoid’s subsequent bobble on the turn four cushion, that sealed the deal for Windom to secure the victory by a 1.736 second margin over Kofoid, Thomas, Thorson and Friday night winner Emerson Axsom, who also earned his first career Fatheadz Fast Qualifying time with the series earlier in the night.

Kofoid (Penngrove, Calif.) finished as the runner-up in his Keith Kunz-Curb-Agajanian Motorsports/Mobil 1 – TRD – IWX/Bullet By Spike/Speedway Toyota for his fourth top-three feature finish in six starts with the series this season.

Thomas (Cullman, Ala.) was the biggest mover in the event aboard his Petry Motorsports/Gray Auto – FK Rod Ends – Greber Racing Components/Bullet By Spike/Speedway Toyota, wheeling it from his 13th starting position to a 3rd place finish, which was his best result with the series this year.

**Daison Pursley flipped on lap 17 of the feature.