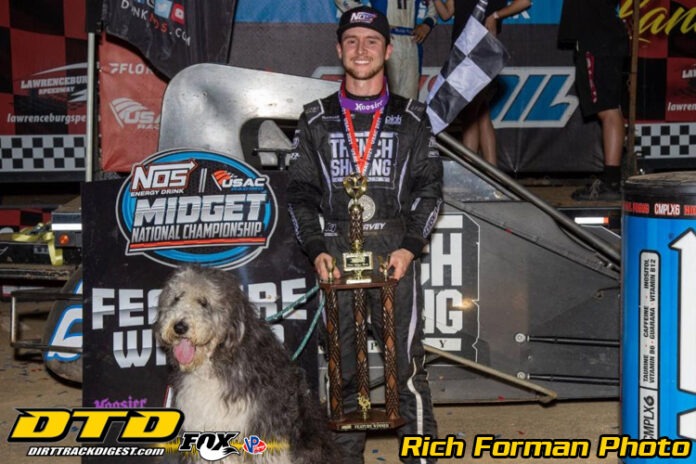 LAWRENCBURG, IN – As the lone past Indiana Midget Week championship representative in Saturday night’s starting lineup at Lawrenceburg (Ind.) Speedway, Logan Seavey knows all too well what it takes to compete and win during this most intense and busy week(s) of USAC NOS Energy Drink National Midget racing.

The 2019 IMW titlist and one-time IMW race winner from Sutter, Calif. returned to form at the 3/8-mile oval to survive and withstand a late-race cascade of cautions and challenges served by way of current IMW point leader Buddy Kofoid, the very driver aiming to establish himself in the echelon Seavey positioned himself in just two years prior.

Seavey was succeeded at the beginning of the 2020 season by Kofoid in the Keith Kunz/Curb-Agajanian Motorsports No. 67, the team for which Seavey earned the bulk of his earliest USAC accolades and achievements, the likes of which included a 2018 National Midget championship as well.

For 2021, Seavey aligned himself with the Tom Malloy-owned outfit and, after an imbalanced early part to the schedule, the pairing seems to have hit its stride, earning their first win together and serving notice to the competition of their aspirations to capture the Indiana Midget Week title, which they trail now by only 14 points to Kofoid with three races complete and four more remaining.

The Lawrenceburg win was a longtime coming for Seavey who hadn’t won a USAC National Midget feature since 2019 at Lanco’s Clyde Martin Memorial Speedway. It’s the first occasion of what Seavey hopes will become an increasingly more often routine in his Tom Malloy/Trench Shoring – Rodela Specialty Fabrication/King/Ed Pink Toyota.

“This feels awesome,” Seavey exclaimed following his seventh career USAC National Midget win. “With Tom Malloy and Jerome (Rodela), Chris (Tramel) and Krieg Poland working so hard, this definitely wouldn’t even be possible. It’s been a couple years since I’ve won a national midget race and it feels really good. We’ve had so much speed and I just haven’t been getting the job done in the features. Tonight, we got to the lead early and we’re able to set our pace and show the speed this thing has had all year. I’m just glad I could get it done for these guys. They work so hard, and they have such a nice race car. I’m just lucky to be the one driving it.”

Seavey started third in the 22-car field but was already hustling his way past both front row occupiers from the word “go.” While outside front row starter Chris Windom disposed of pole sitter Thomas Meseraull to lead the opening lap, Seavey set sail up top and drove by Meseraull off turn four, then rocketed around Windom moments later for the lead exiting turn two on the second circuit and immediately constructed a more than one second advantage.

Trouble befell third-running Meseraull on the fifth lap when he jumped over the turn one cushion, tagged the outside wall and began flipping. Kevin Thomas Jr., with no place to escape, ran into the bottom of Meseraull’s racecar while it was still flipping down the racetrack. As a result, Meseraull was finished for the evening with damage too extensive while Thomas ultimately returned, finishing a distant 19th.

Time and time again on this evening, Seavey showed his strong suit on restarts where he was mostly unheeded as he launched away from his pursuers. Behind him, though, Chris Windom and Justin Grant were engaged in their own personal war after exchanging “White Castles” on both ends of the racetrack, lap after lap, on a loop.

That proved to be all to Seavey’s advantage as his interval jumped to one second, then a full two seconds and a half-straightaway as the laps clicked away amid a rapid pace before, during and in the post-aftermath of the halfway mark. In traffic, however, Windom sliced Kofoid’s lead in half to a mere second.

The length of Kofoid’s lead shrank substantially once more on the 19th lap when 11th running Bryant Wiedeman flipped after contacting the outer concrete in turns three and four. The series’ top-leading Rookie was uninjured in the incident, which came less than 24 hours following his best career USAC finish, a 5th at Bloomington Speedway.

With a clear, unhindered view from behind his visor, Seavey powered away on the restart while Windom and now third-running Windom went on the attack, relentlessly sliding each other without an ounce of hesitation on the tip of their minds in turns one and three. It was no holds barred between the two, with Kofoid able to corral the position just nine trips from the conclusion.

Less than a lap later, a flurry of carnage began to rear its ugly head when Daison Pursley (4th) and Chase Randall (5th) collided in the middle of turn four, sending Randall into a 180-degree spin before flipping over and flopping onto the left side of his car to bring out the red flag. Damage to Randall’s car appeared fairly insignificant at the time and, after a minute in the work area.

On the 22nd lap restart, Kofoid sent out a teaser by pulling alongside Seavey in turns one and two but was unable to make Seavey surrender the position in any manner whatsoever, which in turn, allowed Windom to distance himself once again from Kofoid.

Randall’s brief reemergence to the action was short-lived, however, as the Waco, Texas Rookie driver’s night went from bad to worse. As Randall entered the third turn on lap 24, an apparent part failure sent him into a nasty series of flips in turn three. An extraordinary amount of hang time resulted for Randall as he ricocheted off the top of the catchfence before seemingly falling from the sky and back to the track surface. Randall emerged from the wreckage physically okay following the pair of incidents but was finished for the evening, and for the weekend.

An open track awaited race leader Seavey for the restart with seven laps to go, but he was keenly aware that Lawrenceburg is a nesting ground for slide jobs on restarts, and he was in the ultimate sitting duck position. As the field rolled away to take the green, Seavey stretched out a big enough gap that Kofoid had no attack and no chance to fight for, at least for turns ones and two.

Following Seavey on the high side, as it turned out, Kofoid was setting up a turn three maneuver, and took his shot, firing a bomb across the bow of Seavey which briefly sent him to P1. However, Seavey was prepared in anticipation of the challenge, and already had his front bumper pointed back under Kofoid where he drove downhill to pull ahead, as it turned out, for good.

Seavey closed the account during the final six laps and cashed in to win his first USAC National Midget feature of the season, and first for car owner Tom Malloy over Kofoid, Windom, Grant and Brenham Crouch, who rounded out the top-five with a career-best USAC finish.

With the win, Seavey now stands second in the Indiana Midget Week standings and has placed himself into instant IMS championship contention. He’s got the ingredients, he’s got the car, he’s got the win in the bank, and he’s got the confidence after a flawless performance, which is just one of the several parts of the equation it’s going to take to win this eight-race in ten nights deal.

“It just takes speed all the time and not making too many big mistakes,” Seavey explained of what an Indiana Midget Week championship entails. “So far, that’s what we’re doing. Obviously, Buddy and Chris are doing the same thing. I think it’s going to come down to the wire this week and that’s a cool thing to have for the fans. I lost a lot of spots last night when I shouldn’t have, so I just have to minimize those kind of nights.”

There’s not much time to bask in the glory of an Indiana Midget Week victory like this one with the next race less than 24 hours away and a relatively long, lonesome highway voyage during the night staring square into their eyes. In fact, Seavey had less time than most Saturday night, hopping out of the midget and proceeding to win the accompanying sprint car feature to sweep the night.

With full momentum on his side, Seavey still took a moment to relish the importance of a substantial victory for he and his midget team.

“Indiana Midget Week is one of those bittersweet weeks,” Seavey admitted. “You win a race and tomorrow it doesn’t matter. You’re showing up to race again and you don’t really have the week to celebrate it. But it is really cool. These are big races to win and I’m glad I could get another one.”

Runner-up finisher Kofoid (Penngrove, Calif.) has known Seavey since he was a 6-year old as they grew up racing outlaw karts together. The two Californian’s have a deep respect for one another, and they were able to engage in a highly entertaining “slider-fest” without any contact, a place where the brand of racing is necessary in order to elevate yourself up the results sheet, which Kofoid did aboard his Keith Kunz-Curb-Agajanian Motorsports/Mobil 1 – TRD – IWX/Bullet By Spike/Speedway Toyota.

“At this place, you’ve got to throw them,” Kofoid said, referring to slide jobs. “There’s no other lane to run but the top, and the way to get in front of a guy is to slide up right back into his lane. Once it slicked off, we got going well and, I think we were close to even with him, but at a track like this, it’s really tough to be better in open air. I would’ve liked to have won this one; obviously would like to win any one.”

With winged sprint car experience and now a highly-successful midget foray under his belt on the high banks of Lawrenceburg, Kofoid has a readily apparent comfort level at the venue in which he now has placed right at the top of his ever-growing “favorites” list.

“This place is special because it’s so much fun; I enjoy coming here,” Kofoid revealed. “It’s big and fast and high banked and my love for it started in a wing sprint car, that’s where I came from. Running sprint cars here has been really fun and I’ve had pretty good success with the World of Outlaws the two times that I’ve done it. We’ve been good with the midget too, but I would’ve liked to have been one spot better. It’s another good points night and things are ticking good.”

Hayden Reinbold (Gilbert, Ariz.) turned in a career-best 6th place qualifying result Saturday at Lawrenceburg, but had his race come to a spectacular end when he sucked his right rear tire into the wall and flipped wildly down the main straightaway during the semi-feature. Reinbold walked away from the wreckage under his own power.