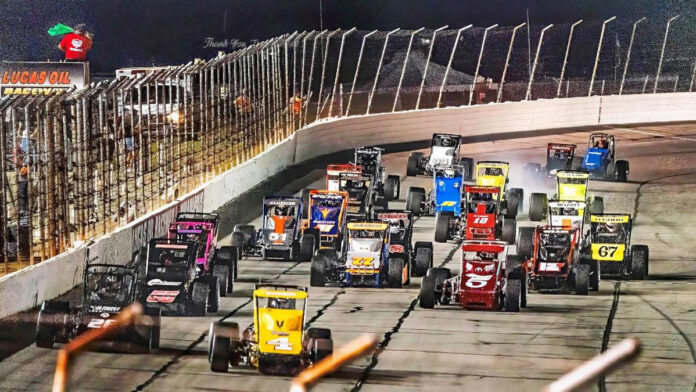 Both races are non-points, special events on the USAC calendar and will celebrate the personalities and broadcasts that made the track a staple in living rooms across the United States. Thursday Night Thunder also helped establish names like Jeff Gordon, Tony Stewart, Ryan Newman, Kasey Kahne and others into the vocabulary of racing fans everywhere.

Jeff Gordon will be a special guest for the event on Thursday. Gordon won five USAC National events at the track between 1989-90 (4 midget & 1 sprint), most of which were showcased on live television, before going on to become a household name with NASCAR.

Up for grabs is the Rich Vogler Memorial Trophy, awarded to each of the feature winners for both the sprint car and midget portions of Thursday Night Thunder Homecoming. Both divisions will conclude with 40-lap features paying $5,000-to-win with a field of 23 Midgets and 18 Sprint Cars.

After sweeping both eligible races at the Carb Night Classic in May, California native Kody Swanson is leading the way in the 2021 A.J. Foyt Championship standings. By winning in USAC Silver Crown and Brown’s Oil Championship Midgets on May 29, Swanson has a 13-point advantage over Bobby Santos with two points races up for grabs.

To learn more about the season-long A.J. Foyt Championship, standings and much more, visit www.LucasOilRaceway.com/foytchampionship/.

Gate two opens at Noon EDT on race day. Pit/team load-in begins at 1:30pm. Spectator gates open at 3pm. Sprint Car practice starts at 3:30pm and midget practice takes place at 4:35pm. Sprint Car qualifying is set for 5:50pm and Midget Qualifying at 6:35pm. Opening ceremonies are slated for 7:15pm with the Sprint Car feature rolling off at 7:45pm and the Midget feature at 8:30pm.

Event tickets are available at https://lucasoilraceway.com/thunderhomecoming/.

The event will be streamed live on FloRacing at https://bit.ly/3dgONXz.

7A DALTON ARMSTRONG/New Castle, IN (Armstrong)