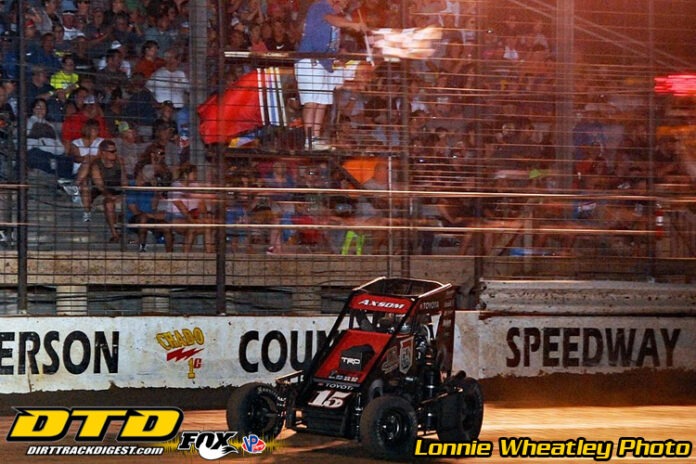 FAIRBURY, NE – As a Rookie making just his third career USAC NOS Energy Drink National Midget start a year ago at Fairbury, Nebraska’s Jefferson County Speedway, Emerson Axsom made his initial statement in the series by leading until three laps to go before finishing as the runner-up.

Since that time, as the Franklin, Ind. driver has progressed and gained an entire year of experience on the tour, he never let that particular race slip from his memory bank with the thought that, if he had the chance to get that one back, he’d be the winner this time around.

Axsom put those lessons and ambitions into action Saturday night during the Mid-America Midget Week finale, the Riverside Chevrolet Midwest Midget Championship presented by Westin Packaged Meats and Schmidt’s Sanitation, where he led the final eight laps on the 1/5-mile dirt oval to score a $10,000 prize in his Petry Motorsports/FK Rod Ends – Iron Born Studio/Bullet By Spike/Speedway Toyota.

“Last year, we said that if that had been this year, we would’ve won that race. To say that and then to actually do it, that feels pretty good right now,” Axsom said. “The biggest thing is seat time and figuring out how much is too much and how little is too little. I’ve kind of found the sweet spot here lately.”


Axsom’s pursuit of his second career USAC National Midget feature victory didn’t come without a bit of friction late in the going which led to a hearty chorus of reactions from the throng of fans packed into the covered grandstand.

Axsom led the first of the 40 laps, crawling the bottom to reach the front of the field, then waged in a side-by-side battle for much of the first quarter of the event alongside pole sitter Logan Seavey. The war was chock full of lead swaps and crossovers that Seavey maintained control over for the opening seven laps until New Zealand’s Hayden Williams, running 22nd, tipped over in turn one.

Seavey promptly commanded the race lead following the restart for seven more laps when, on lap 14, seventh running Tanner Thorson and sixth-place Cannon McIntosh made front bumper to rear bumper contact, sending McIntosh spinning and also collecting eighth-place Thomas Meseraull who did a 90-degree rotation in an attempt to avoid the melee. Further down the track, Thorson stopped on the back straightaway. All three were able to restart from the tail.

On the resumption of lap 17th running Jake Bubak was caught in a sandwich as he tried to split between Tyler Thomas and Kyle Jones on the back straightway. The resulting contact sent the Coloradan barrel-rolling to bring out the red flag. Bubak was uninjured, but the damage proved too extensive for him to return from.

When the green flag dropped again, Seavey slipped away to distance himself from Axsom who subsequently lost the second position to Justin Grant on the 15th lap and the third spot to Kevin Thomas Jr. on the 19th lap. Axsom regained 3rd a lap later on the 20th circuit and raced back into 2nd on the 21st go-around.

Grant, meanwhile, dueled with Axsom until lap 23 when near contact almost caused Grant to stall his machine in turn two, dropping him back to 5th.

Moments later, the yellow flag was displayed for 9th running Chase Randall and Rocky Mountain Midget Racing Association point leader Zac Taylor, who both came to a rest in the fourth turn. Randall was parked with a flat left rear tire while Taylor was aimed backwards adjacent to Randall. Randall came back to finish 13th while Taylor bowed out in the 20th position.

At the time prior to the yellow, Seavey possessed a full straightaway lead of 1.7 seconds that was erased from the board. K. Thomas blitzed back into 2nd on lap 24 at the line as the trio of Seavey, K. Thomas and Axsom were staged three-wide exiting turn four. K. Thomas ultimately lost the runner-up spot to his Petry Motorsports teammate Axsom on lap 26.

Axsom chased down Seavey and, on lap 31, slid under Seavey for the race lead, holding briefly, but Seavey countered to retake the spot as the two crossed the line nose-to-tail.

The pressure was turned up to the melting point as the leaders encountered the final car on the lead lap, 11-time Rocky Mountain Midget champion Keith Rauch, with eight laps remaining as the entire event reached a fever pitch.

With Seavey leading and Axsom just a car length behind entering turn one on the 33rd lap, Axsom’s front bumper and the left side of Seavey’s rear bumper met chrome to chrome, sending Seavey into a 360 degree spin in turn two. By rule, with the yellow flown for his 360 spin, Seavey was sent to the tail for the restart, while Axsom assumed his role as the new race leader.

“Really, I think what caused it was the lapped car,” Axsom explained. “Logan went in over the cushion a little extra high to diamond it. When he got on the brakes and turned down, it was already sideways from turning down. I expected him to kind of follow him through or slide him the next corner. I was on the brakes hard. If I wanted to wreck Logan, I would’ve done it on lap two; I definitely didn’t mean to. I’m glad we won, and I felt we had the fastest car anyway, but I wish we could’ve done it a little bit better.”

It was bitter disappointment for Seavey after leading a race-high 31 laps, owns the Jefferson County Speedway one-lap track record and owned the majority of Saturday night’s event until “the moment” occurred.

“I had a great racecar, but it sucks to be in a position to win and not get it done,” Seavey admitted. “For the most part, I was getting through traffic pretty well and didn’t really get stuck behind many cars. I saw the 27 (Rauch) was running the top in one and two and the bottom in three and four. He kind of had a different entry into turn one. I thought he was going to the bottom, so I sent it to the top. I got on the brakes to not get in the back of a lapped car.

Obviously, Emerson was pretty close,” Seavey continued. “I don’t think he went in there to crash me or anything. If he wanted to crash me, he had plenty of opportunities before that. He just didn’t slow down as much as I did, and I went around. It’s just part of it. It sucks to lose any race. It sucks a lot to lose a race that pays 10 grand.”

After the hullaballoo, Axsom now had to finish off eight more laps with his teammate, K. Thomas and the ever-surging point leader Buddy Kofoid, running third after starting all the way back in 15th.

Kofoid slid past K. Thomas in turn two on lap 34, then quickly erased the half-second gap that existed between he and Axsom. Kofoid tried a slider on Axsom in turn two with three to go that came up short and fell back into line just as the final yellow came out for contact between Thorson and Grant, running in the 6th and 7th positions, respectively, resulting in Thorson spinning and stopping on the bottom of turn three. Thorson’s two-race winning came streak came to an end as a result, finishing the week with a 19th place result.

Axsom got a clean restart with three laps remaining, holding Kofoid at bay for the time being. Coming to the white flag, Kofoid inched closer, but encountered a rough patch against the turn two cushion and fell over the perimeter of the track surface on the back straight, essentially extinguishing all hope for a victory bid for the point leader.

Axsom, who had spent the previous night playing badminton until 4am and battled with fellow driver Sam Johnson in a friendly game in the pit area prior to Saturday’s hot laps, closed out his victory on the racetrack by a 0.572 second margin over Kofoid with Chris Windom, Justin Grant and Daison Pursley rounding out the top-five.

Buddy Kofoid (Penngrove, Calif.) extended his USAC NOS Energy Drink National Midget lead by three to 37 points with a 15th to 2nd surge in his Keith Kunz-Curb-Agajanian Motorsports/Mobil 1 – TRD – IWX/Bullet By Spike/Speedway Toyota that earned him the KSE Racing Products Hard Charger award for the evening.