ARP, the world leader in fastener technology, is the title sponsor for the for the famed 98-lap Turkey Night Grand Prix race at the 1/5-mile dirt oval that sits right on the beach. The event dates back to the origins of midget racing and maintains its prestige today as one of the crown jewels of dirt track auto racing.

That prestige has ARP thrilled to be involved in an event with such a steep, rich history, which in turn, has them sweetening the purse with this year’s Turkey Night Grand Prix midget feature winner now receiving a $10,000 check from ARP and a specially-designed trophy to commemorate the world famous race.

“ARP is proud to be part of the history and of a race that dates back to 1934 and has produced so many great winners,” said Chris Raschke, director of sales and marketing for ARP.

For the first time in 2021, the Turkey Night Grand Prix will be contested on Saturday, November 27, with practice and sprint car prelims the night before on Friday, November 26.


The race will serve as the season finale for the USAC NOS Energy Drink Midget National Midgets in 2021. 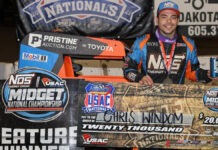