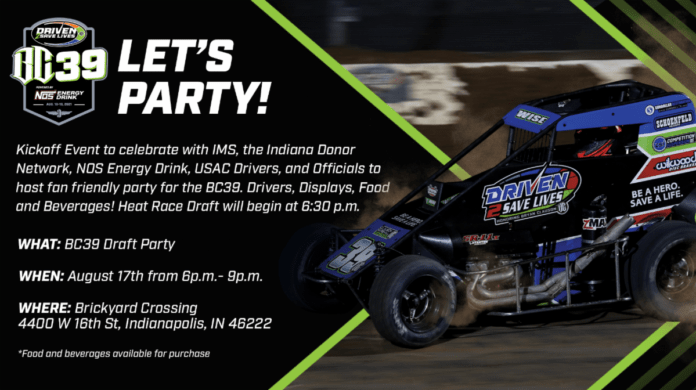 The Driven2SaveLives BC39 powered by NOS Energy Drink gets amped up on Tuesday, August 17, the night before the dirt flies at The Dirt Track at IMS with the BC39 Draft Party.

Make your way to the Brickyard Crossing located at 4400 W. 16th Street in Indianapolis, Ind. where drivers will choose their heat race positions for the opening night (August 18) of the Driven2SaveLives BC39 Powered by NOS Energy Drink.

All cars entered will be randomized into picking order for the heat race draft. Teams will be able to pick their heat race spot, either in person with a representative or remotely through USAC officials. Any unrepresented team will be given the first available spot. The heat race position draft is open to the public with team members getting priority into the Brickyard Crossing.

Teams without representation at the Draft Party will move to the bottom of the draft selection order.

The kickoff event is a fan-friendly celebration with IMS, the Indiana Donor Network, NOS Energy Drink, USAC drivers and officials to host a fan friendly party for the BC39 featuring drivers, displays, food and beverages. The party runs from 6pm Eastern to 9pm with the draft set to begin at 6:30pm.

The BC39 officially gets underway on Tuesday, August 17, with team parking at Noon Eastern. On track action begins Wednesday, August 18, beginning with the drivers meeting in the IMS Media Room at 2pm Eastern. Public gates open at 3pm with cars hitting the track for practice at 4pm, followed by opening ceremonies at 7pm. Heat races and the incredibly exciting Stoops Pursuit feature race will conclude the night’s racing action.

Competitors can file their entry for the BC39 at www.TheBC39.com.