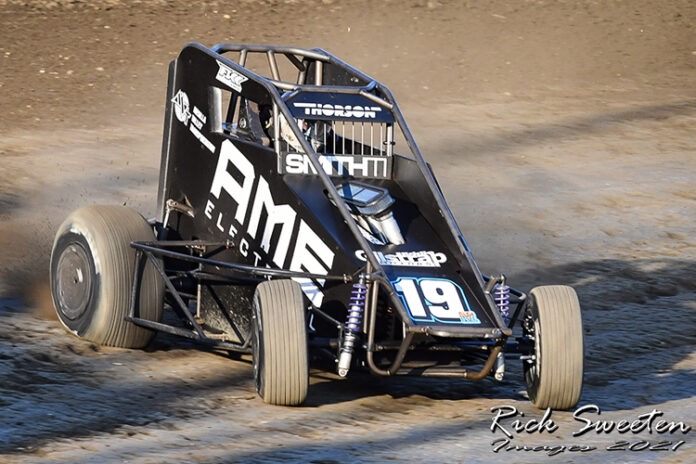 BRIDGEPORT, NJ – It had been 32 years since USAC NOS Energy Drink National Midgets last turned a wheel in the state of New Jersey.

At the conclusion of Thursday’s Eastern Midget Week round three at Bridgeport Motorsports Park, Thorson found himself ahead of the field by 32 light years, or so it seemed, as he scored the most dominating victory of the season in the series’ first ever visit to the 4/10-mile high banked dirt oval.

Thorson flexed his way into the lead on the fifth lap past pole sitter Emerson Axsom, then steadily increased the gap between he and the rest of the field throughout the 30-lap duration to win by a staggering 8.429 seconds, putting all but the top-eight finishers a lap down in the 21-car field aboard his Reinbold-Underwood Motorsports/AME Electrical – The Healing Tree/Spike/Stanton SR-11x.

Thorson found his groove nearly instantaneously, making a beeline to the inside from his outside second row starting spot in turn one on the opening lap to slot into second behind Axsom. After sliding away from the bottom between turns three and four at the end of the first lap, Cannon McIntosh slid under to take away second from him on the bottom of turns one and two.

Thorson went straight back to the inside line in three and four on the second lap and whipped past McIntosh for the runner-up spot where he quickly began to shrink the gap between himself and race leader Axsom.

The feature’s lone caution came on lap five when 10th running Zach Daum’s engine expired in a dramatic manner with a big ball of flame emanating from the car before quickly dissipating. Daum steered his coasting car right to the extinguisher, then hopped out in a jiff with his steering wheel in hand, officially out of the race.

The bottom wasn’t only the shortest way around, but also the fastest way around for Thorson on the lap five restart. There, Thorson was hooked up, wheels up, right around the infield tires in turns three and four as he scooted to the lead and never lost any speed on his fastball for the remainder of the distance.

“As soon as I rolled out there, I saw there was a bunch of grip and I figured the modifieds had made the bottom hooked up for us,” Thorson recalled. “As soon as I fired off, I went down there and was able to feel it out and knew that was going to be the place to be.”

Thomas Meseraull found the same path to his liking as he raced past Axsom on lap eight for the second position. However, by then, Thorson was in the midst of a tear, up by a straightaway on lap 10 and by a half lap on at the midway point on lap 15.

As Buddy Kofoid muscled his way into the third spot with nine laps remaining, Thorson remained ahead by 7.5 seconds and ever-growing as he split between and breezed by everybody in his path, putting the likes of series winners Daison Pursley and Justin Grant a lap down on his torrid pace as he entered the top-10…to lap them.

With an average feature finish of 11th over his last three series starts, Thorson put himself back on top for the 25th time in his USAC National Midget career, surpassing Billy Engelhart in terms of wins and tying himself with Darren Hagen, Parnelli Jones and Dave Strickland for 16th on the all-time list.

“We’ve struggled the last couple nights, I feel like,” Thorson said. “Just the fact that our team has worked so hard together, it has definitely paid off and shows.”

Thorson’s midget victory comes after a 12th place finish in a USAC National Sprint Car feature in his only previous Bridgeport experience during Eastern Storm in June. He admitted feeling the struggle linger on into tonight following a fifth-place finish in his heat race. Thorson finally found the perfect recipe on Thursday night during the feature.

“Midgets and sprint cars are obviously a little different,” Thorson stated. “With the sprint car, it was kind of hard to run the bottom here. I think the midget has so much side load that you can load it off on the bottom and be stuck way, way better than a sprint car.”

Thomas Meseraull had endured a tumultuous first two nights of Eastern Midget Week, first at Grandview Speedway where his right rear was toppled by a push truck at the start of the feature. The following night at Action Track USA, his race ended with a first lap feature incident while battling for the lead. Thursday night saw the San Jose, California native score his best result since winning the Indiana Midget Week opener at Paragon Speedway more than two months earlier, earning a runner-up finish in his RMS Racing/EnviroFab – Response Management Services – Engler Machine/Spike/Speedway Toyota.

“When it got slick, it went slick, slick,” Meseraull explained of the track conditions on his path to the front. “Modifieds weren’t running the bottom, but the midgets, they’ll run the bottom pretty good compared to a lot of bigger cars with a lot of weight. I saw Tanner (Thorson) down there starting to roll the bottom. We really weren’t set up to run down there. I might’ve had something if we had geared for the bottom, but Tanner drove away. I feel like the team deserves this. We’ve been on the road for the last 40 days, I feel like. It’s been a grind, but it’s nice to be up on the podium with this car.”

Buddy Kofoid (Penngrove, Calif.), casted up with a broken right wrist and broken left foot, toughed it out to earn a second consecutive podium finish in his Keith Kunz-Curb-Agajanian Motorsports/Mobil 1 – TRD – IWX/Bullet By Spike/Speedway Toyota, finishing third at Bridgeport and extending his series point lead to 19 markers over fourth-place feature finisher Chris Windom.

“Toward the bottom was the fastest line, but my car was pretty good all over and I don’t think we were quite set up to run the bottom with us not expecting the track to do that,” Kofoid said. “I could make up a lot of ground early on by sliding myself and splitting guys. The bottom came in and it got dirty where I couldn’t really run my line through the middle or run the fence. It was another pretty good points night and I’m glad to be on the podium again. I just need to be two spots better.”

Alex Bright (Collegeville, Pa.) earned his first career USAC National Midget fast time during Fatheadz Eyewear Qualifying. The decade-plus veteran of the series set the top time and established a track record on the same night he made his 68th career series feature start. Bright knows these banks of Bridgeport Motorsports Park well. He played a major role in the reconstruction of the track by operating the bulldozer that carved out the high banks in 2020.