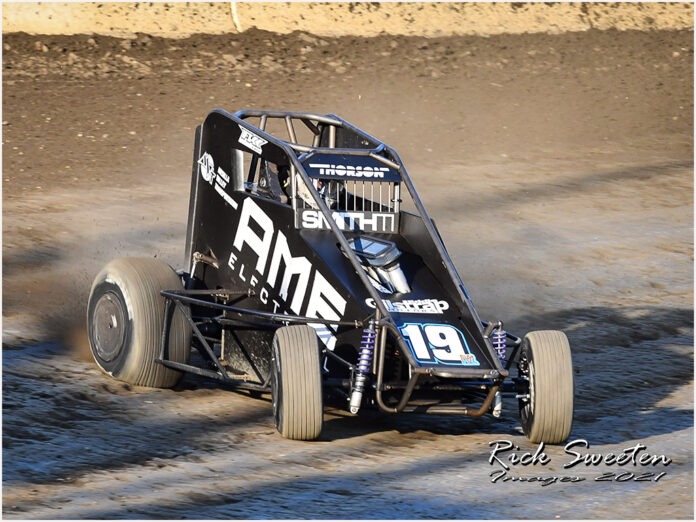 Twenty-four hours after trouncing the field by half a lap in the series’ debut at New Jersey’s Bridgeport Speedway, the Minden, Nevada native found a slightly different route to victory on Friday night in the first-ever series event at the newly-renovated Bloomsburg Fair Raceway in Pennsylvania.

With 10 laps remaining, Thorson found himself a distant second while Thomas Meseraull ruled the roost up front. However, a tangle that ensued as Meseraull was attempting to lap Glenn Waterland signaled the end of Meseraull’s victory ambitions.

As the new leader, Thorson never relented down the stretch to earn his series-leading sixth USAC National Midget feature win of the season in his Reinbold-Underwood Motorsports/AME Electrical – The Healing Tree – Eddie Gilstrap Motors/Spike/Stanton SR-11x.

Thorson’s win was the 26th of his USAC National Midget career, elevating him past Darren Hagen, Parnelli Jones and Dave Strickland for sole possession of 16th on the all-time list, and just one win behind Gary Bettenhausen and Tony Stewart for 14th.

Friday night at Bloomsburg marked Thorson’s fourth career Eastern Midget Week feature score, tying him with Chad Boat for the most all-time in the seven-year history of the series. The win was also the fourth time in Thorson’s USAC National Midget career that he’s won consecutive feature events, and the second time this year alone.

Thorson has won feature races in a variety of different ways throughout his career. In that period of time, he’s learned to not be picky about how a win comes along. You take them any way you can get them. The main ingredient to it all is putting yourself into position in the chance that things do go awry, and you’re right there to capitalize on the situation at hand.

How it played out wasn’t quite exactly how Thorson drew it up, but it was he who wrapped it up once again for his ninth overall USAC National feature win of the season between Midgets and Sprint Cars, which has already made 2021 Thorson’s most successful USAC season of his career.

“It’s definitely better to be lucky than good sometimes,” Thorson admitted. “I feel bad for Thomas and his crew. They were really, really fast. I don’t know if we would’ve had anything for him. My car was getting better and better there on that long green flag run, but I don’t know. Thomas was good; there’s no doubt about that. I’m really happy for my team. This Reinbold-underwood team is awesome. I switched over to them, and it’s the best decision I’ve ever made in my racing career.”

Pennsylvanian Alex Bright broke out to the early lead from his pole starting position, but fourth-starting Thomas Meseraull was initially the show, bulleting by Kevin Thomas Jr. and Daison Pursley amid a three-car tussle for the runner-up position, gaining the second spot in a harrowing manner when Pursley got loose on the high side exit of turn four. Meseraull ramped his own right rear tire over Pursley’s left front and continued onward as Pursley faltered back to fifth in the order.

Meseraull ultimately tracked down Bright on the eighth lap off the bottom exit of turn four to occupy the lead where he’d remain a sole proprietor of throughout the middle stages of the event, checking out to a commanding 1.6 second lead until 12th running Chase Randall slowed to a stop with a rear-end issue on lap 13.

With his lead erased, Bright found his second wind on the lap 13 restart, sliding deep past Meseraull into turn three. Yet, Meseraull countered back under to retake the lead at the line by a car length before withstanding another Bright punch to the body on lap 14 in the same spot that Meseraull thwarted.

All along, lurking on the bottom just behind Meseraull and Bright was Thorson, performing similarly to the manner in which he did the previous night at Bridgeport, circling the bottom to lunge forward, underneath and past Bright on lap 17. By that point, though, Meseraull had reestablished his 1.5 second lead and was in total command as he began to work through traffic.

Within Meseraull’s sight as he worked turns one and two on the 21st lap was 19th running Glenn Waterland. As Waterland occupied the middle lane, Meseraull swept up from the bottom of turn one on entry toward the top, contact was made between Meseraull’s front bumper and Waterland’s rear bumper, sending both into a 180-degree spin before stopping.

It was a bitterly disappointing conclusion for Meseraull who returned to the fold and climbed back to 11th at the checkered flag while Waterland was 18th.

On the ensuing restart, and for the final nine lap run, Thorson maintained control of the race. Although second-running Justin Grant was able to keep Thorson right within his crosshairs, he was unable to draw any closer to the 2016 USAC National Midget driving champion who closed out with a 0.223 second victory over Grant, Cannon McIntosh, Bright and Emerson Axsom.

“It’s always great when you can win at least one of the races on a swing like this. To be able to win two is pretty special,” Thorson said. “The competition is really stout. It used to be where you’re competing with about only five, six or seven guys that could win the race, but now I feel like the top-12 to 15 on almost any given night are in contention to win.”

Sill looking for his first USAC National Midget feature win for RMS, Grant is joyous to “not be wadded up in a big ball” after a trying week which saw him endure a wild opening lap flip at Action Track USA and was in the thick of contact during Bloomsburg’s accompanying USAC East Coast Sprint Car feature that sent him into a spin while leading. Grant hoped for one more opportunity to get at Thorson late, but a win was not in the cards for the reigning USAC Silver Crown champ.

“That last restart was a great opportunity for us to try to close the gap and win the race, but I got goobered up on the berm off four and spun my tires down the front stretch,” Grant recalled. “This series is tough, and these guys are really tough. When you spin the tires like that, you can’t leave the entry open, so I had to protect on the first lap to not get mugged into one. That kind of killed my chance to really get ringing around the top and make some momentum to throw a slider on Tanner into three. From there, we were just trying to run him down. We were good, but he was good as well and it was just hard to close that gap.”

Cannon McIntosh (Bixby, Okla.) flashed from 5th to 3rd during a late-race stretch that provided him his first podium finish with the series since a second-place result at Paragon Speedway during Indiana Midget Week on June 3 in his Dave Mac Motorsports/DriveWFX.com – SBS Shocks – D.A. McIntosh/Spike/Speedway Toyota.

“We had a really good car, so I was able to put it wherever I needed to there at the end,” McIntosh remembered. “I knew the car deserved to be up a couple more spots, so I just drove it as hard as I could at the end to try and get us on the podium, and it’s good to be back here. This team deserves it; everybody works pretty hard and, hopefully, that gets us closer to where we want to be, which is a win.

Every time we’ve had speed lately, things just haven’t gone our way to show how much speed we’ve really built up,” McIntosh continued. “It’s been there recently. We just haven’t been able to make it happen. It’s good to show it tonight. We obviously wanted to be a couple spots higher, but we can’t complain about being on the podium.”