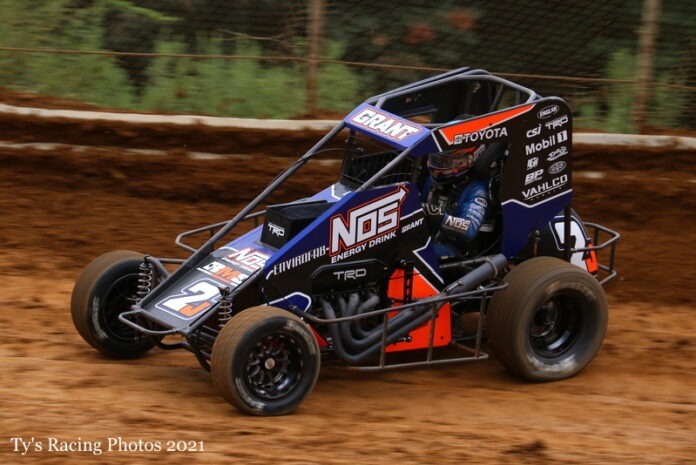 NEWMANSTOWN, PA – Finishing second on any given night can be considered a solid result in the high majority of circumstances.

Finishing second four times without a win when the season is more than halfway complete. Now, that can start to get on your nerves a little bit.

Justin Grant entered Saturday night’s Eastern Midget Week finale at Newmanstown, Pennsylvania’s Lanco’s Clyde Martin Memorial Speedway in that exact scenario. With a large number of quality runs throughout this year’s campaign, it’s been a matter of being good, but not good enough for their liking.

With four second place finishes throughout the 2021 USAC NOS Energy Drink National Midget season, Grant and RMS Racing found the perfect formula to put them on top at Lanco with the Ione, Calif. driver banging the rails around the high-banked, 1/8-mile dirt oval, leading the final 18 circuits and fending off point leader Buddy Kofoid down the stretch to win the 40-lap feature.


Grant’s breakthrough also made him the first driver of the season to win in all three USAC National series – Silver Crown, National Sprint Car and National Midget – all cars in which he’s won in during the last 17 days.

Four second-place finishes is enough to test the patience of any team that expects to win. Grant and RMS had been in contention all year long, posting runner-up results in four different months: April at Oklahoma’s Port City Raceway, June at Kokomo Speedway, July at Oklahoma’s Red Dirt Raceway and August at Bloomsburg Fair Raceway, the latter of which came just 24 hours prior to his Lanco triumph.

A victory a long time coming, perhaps, with an occasion that was cause for both a celebration and a sigh of relief for all involved with the RMS Racing/NOS Energy Drink – EnviroFab – Response Management Services/Spike/Speedway Toyota number 2J.

“It feels great to get this car into victory lane, finally,” Grant exhaled. “Everybody really works really hard on this car, and they’ve given me a great car all year long. We’ve run second a ton and I was just getting frustrated and getting tired of not getting these guys a win. It feels really good to do it for them.”

Grant began his race from the pole position but didn’t stay there too long as outside front row starter, and winner of the two most recent Eastern Midget Week races, Tanner Thorson, motored away to the lead for the opening two trips.

Outside second row starter Emerson Axsom, meanwhile, burst to the head of the field by dipping under Thorson between turns one and two on the third lap. Axsom then countered Thorson’s slide job attempt moments later in turn three to secure the position for the time being.

The first stoppage of the feature came on lap six when 10th running Cannon McIntosh launched like a missile into the turn one catchfence. He walked away without injury after the vicious flip, but his night was ended prematurely, relegating him to a finish of 22nd in the final rundown.

While Axsom remained in control on the 19th lap, Grant and Daison Pursley were in the midst of a manic duel for second. Grant made an attempt for the position underneath while Pursley attempted to eke around the outside of Grant. Pursley ran out of room at the exit and ramped up the guardrail with his right side wheels before coming back down on all fours.

Pursley crunched the outside wall once more mere seconds later in turn three, then again in turn one. Slowing in the middle of the groove on the back straightaway, Pursley was nailed in the tail tank by Brett Wanner who stopped following the contact and was subsequently tagged by Chase Randall. Wanner exited the race, credited with finishing 20th, while Randall resumed to finish 8th.

The third try proved to be the charm for Grant following the restart. Between turns three and four on the 20th lap, Grant fired his first shot by slide jobbing Axsom, but Axsom quickly cut down and reemerged at the front of the field. Grant proceeded with another try in turn one on lap 21 with the same result. Grant tucked in behind Axsom and followed in three and four, setting up the clincher with a slider in turn one that stuck, and also stuck him into the lead on the 22nd lap.

Axsom took one more grasp at the lead, briefly getting by Grant in turn one on lap 24, but Grant buckled down, passed him back underneath and took off in a race that was plagued by a bevy of cautions early on.

Just three laps after Grant spurted away with a fantastic lap 25 restart in which he exploded out to a 1.265 sec. lead, trouble found fifth running Kevin Thomas Jr. who slowed with a puff of smoke emanating from the headers and a trail of fluid showering the track behind him. That necessitated a red flag in order for the track crew to bring out the tiller to help clean up the oiled down surface between turns one and two.

With nine laps remaining, Kofoid had tracked down Axsom and raced by for second in turn one, while Grant held a near insurmountable advantage ahead of Kofoid, 2.5 seconds in front, an interval which was soon erased when the night’s third red flag was displayed for Hayden Reinbold (11th) and Kenney Johnson (12th) who both flipped down the front straightaway. Johnson exited the battle with a 15th place result while Reinbold resumed to finish out the race and collect a career-best series finish of 10th.

The plethora of yellows threw a monkey wrench into Grant’s visions of triumph at Lanco, making him have to withstand restart after restart from a precarious position, in the lead, where anything can, may and will happen at any time.

“You never know how good you’re going to get away on the restart,” Grant explained. “These little places are so susceptible to receiving a big bomb into one. Then, it all goes out the window. It doesn’t matter how good your car is. Then, it becomes a matter of playing the sliders and the crossover. Fortunately, we didn’t have to do any of that. This car was awesome, it would just drive away on the restarts.”

Now with Kofoid on his rear bumper for the restart with eight laps to go, Grant dug deep and laid down a perfect restart once again, distancing himself from Kofoid almost instantaneously while carrying a five car length lead ahead of Kofoid as he crossed the stripe to complete the 33rd lap.

Any visions Kofoid had of tracking down Grant were for naught as Grant kept Kofoid in check, an arm’s length away, during the final restart run. The only hiccup came as Grant clobbered the turn three guardrail coming to the white flag, but it ultimately became a prime case for “no harm, no foul.”

For Grant, enduring the season-long wait for the win and the near hour it took to complete Saturday night’s feature, were met with much the same response from Grant – not a moment too soon.

“By the end of that thing, I had the brakes burned off it and I think the motor was blowing up,” Grant revealed. “I’m pretty sure I packed the right rear wheel. We were limping her home there at the end.”

A test of will and patience was on full display this evening with Grant conquering a venue in which he previously possessed a best finish of 7th in both 2018 and 2020. With a fondness for Lanco’s elbows up style, the desired result didn’t come to Grant until this night, on a track and surface that was right within his wheelhouse.

“I’ve always really liked this place; it’s always a ton of fun,” Grant stated. “It’s a lot of work around here. I was hustling for all 40 laps there. The track was cool. I love a curb on the wall where you get to put on a show and go as fast as you can go for all the fans.”

One year ago this weekend, Buddy Kofoid (Penngrove, Calif.) served as the spotter for Grant in a USAC Silver Crown race at Selinsgrove Speedway. One year later, Kofoid repeated his runner-up finish from Lanco in 2020 by finishing second again in his Keith Kunz-Curb-Agajanian Motorsports/Mobil 1 – TRD – IWX/Bullet By Spike/Speedway Toyota, his best result since breaking his wrist and foot in a stock car crash on July 24 at Elko Speedway in Minnesota, as he continues the healing process and trying to get as comfortable as humanly possible with a cast on his right arm.

“You just had to be perfect on the top, but even the best make mistakes,” Kofoid said. “I saw Justin make a mistake, and right when he’d make one, I would follow him and make the same mistake. I’d stay with him, make a mistake, and he’d pull away, then I’d get back to him, but I couldn’t quite get close enough to get a shot at him.”

Emerson Axsom (Franklin, Ind.) finished all five of his Eastern Midget Week starts within the top-five with two second-place results at Grandview and Action Track USA, followed by two fifths at Bridgeport and Bloomsburg, and rounding out the mini-series with a 3rd at Lanco in his Petry Motorsports/FK Rod Ends – Iron Born Studio/Bullet By Spike/Speedway Toyota.

“For my second year in a midget, I still consider myself a rookie,” Axsom said. “It’s super tough to do well on these types of tracks and it sucks to be so fast all week and not get a win, but we’ll get there. This car is so good.

I wanted to get to the lead early and set the pace,” Axsom continued. “I felt like every time I got a good lead, a caution would come out or a red would come out. It made it really tough on me to get back in a rhythm. Justin’s a veteran and is used to this kind of stuff and is used to putting it up against the wall. But I think, overall, we did really well tonight.”

In Fatheadz Eyewear Qualifying, Daison Pursley became the first driver ever to reach the 9-second bracket at Lanco with a new track record time of 9.972 seconds. His personal first career quick time with the series continued a trend which saw a new one-lap track record at all five events and venues consecutively throughout Eastern Midget Week.