INDIANAPOLIS, IN – Zeb Wise, Tanner Thorson, Buddy Kofoid and more have added their names to the continuously growing entry list for the USAC Driven2SaveLives BC39 Powered By NOS Energy Drink, which has surged to 68 entries for the August 18-19 Midget racing event at The Dirt Track at Indianapolis Motor Speedway.

Teams can file their entry for the event at https://www.thebc39.com/ until the deadline on Thursday, August 12, at Noon Eastern. Also, there on the website, individuals may also purchase tickets, pit and parking passes for the two-night USAC NOS Energy Drink Midget National Championship event.

Wise (Angola, Ind.), who’ll wheel the Matt Wood Racing No. 37 in this year’s event, was victorious in the most recent BC39 held in 2019, making the winning pass seven laps from the finish to win the $15,000 event. He also scored the first midget victory of any kind at The Dirt Track at IMS during the Stoops Pursuit in 2018.

Thorson (Minden, Nev.) and Kofoid (Penngrove, Calif.) lead two of the top teams with the series and both are making their BC39 debuts this year. Thorson, the 2016 USAC National Midget champion, is one of three Reinbold-Underwood Motorsports entries along USAC Rookies Chase Randall (Waco, Texas) and Hayden Reinbold (Gilbert, Ariz.).

Already previously entered for the BC39 are USAC’s three-time USAC AMSOIL National Sprint Car champion and 2018 inaugural BC39 winner Brady Bacon (Broken Arrow, Okla.), who will be on hand as will newly-crowned 2021 Indiana Sprint Week champion Kevin Thomas Jr. (Cullman, Ala.).

Chris Windom (Canton, Ill.), the 2020 USAC NOS Energy Drink Midget National champion, aims to make his third start in the event following a 3rd place finish in 2019. Logan Seavey (Sutter, Calif.) captured the 2018 series crown and will also be eying a third BC39 start after finishing a personal best 5th in 2019. Spencer Bayston (Lebanon, Ind.), the series’ 2017 king, will go after his second start in the event following a 20th place result in 2019.

2020 NASCAR Cup Series champion Chase Elliott (Dawsonville, Ga.) will make his BC39 debut this year. The driver with the most laps led in this year’s Indianapolis 500, Conor Daly (Noblesville, Ind.), will make his third consecutive appearance in the BC39. NASCAR Rookie of the Year contender Chase Briscoe (Mitchell, Ind.), the winner of the NASCAR Xfinity Series’ Pennzoil 150 at the Brickyard on the 2.439 mile road course in 2020, aims to make his second-straight BC39 feature start.

Ryan Newman will compete in one of four Clauson Marshall Racing entries. Newman (South Bend, Ind.), an 18-time NASCAR Cup Series winner, captured the 2008 Daytona 500 and the 2013 Brickyard 400 on the 2.5-mile paved oval at the Indianapolis Motor Speedway and was a USAC National champion earlier in his career with the Silver Crown series in 1999.

Two-time USAC National champion and recent Kings Royal winner, Tyler Courtney (Indianapolis, Ind.), returns for a third BC39 start after finishing 4th in 2018 and charged from 20th to 2nd in the 2019 event. CMR teammates joining Newman and Courtney include the series’ youngest ever winner, Corey Day (Clovis, Calif.), along with series veteran Cole Bodine (Rossville, Ind.).

Two-time 2021 USAC NOS Energy Drink National Midget feature winner Emerson Axsom (Franklin, Ind.) will get his first taste of BC39 experience this year. Shane Cottle (Kansas, Ill.) has won twice on the USAC Regional Midget trail in 2021 and seeks his first BC39 start since 2018 in August.

The USAC Driven2SaveLives BC39 powered by NOS Energy Drink gets amped up on Tuesday, August 17, with the BC39 Draft Party where drivers will choose their heat race positions for the opening night of the BC39. The Draft Party will be held at the Brickyard Crossing located at 4400 W. 16th Street in Indianapolis, Ind.

The BC39 officially gets underway on Tuesday, August 17, with team parking at Noon Eastern. On track action begins Wednesday, August 18, beginning with the drivers meeting in the IMS Media Room at 2pm Eastern. Public gates open at 3pm with cars hitting the track for practice at 4pm, followed by opening ceremonies at 7pm. Heat races and the incredibly exciting Stoops Pursuit feature race will conclude the night’s racing action.

6BC RYAN NEWMAN/South Bend, IN 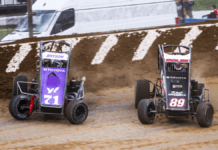 BC39 Moves to Four Nights at IMS Dirt Track