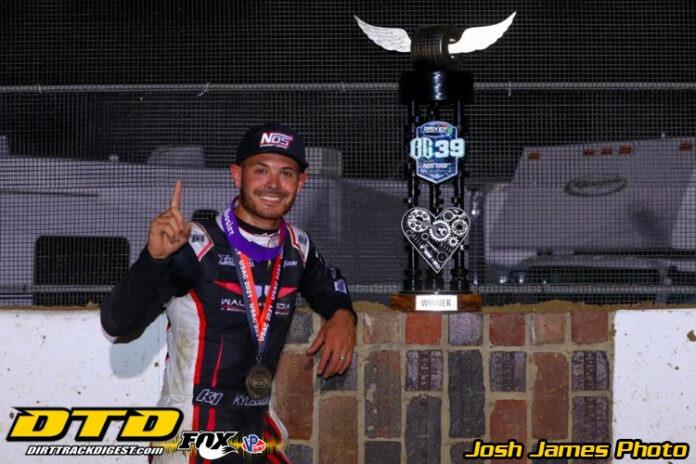 SPEEDWAY, IN – It was chaos. It was mayhem. It was heart palpitating. But, in the end, the third running of the USAC Driven2SaveLives BC39 Powered By NOS Energy Drink will best be remembered by a one word description – “Larson.”

One night after capturing victory in the Stoops Pursuit at The Dirt Track at Indianapolis Motor Speedway, Kyle Larson warded off a continuous onslaught of haymakers, bombs and sliders, all while simultaneously wheeling his way to the front, enduring the mental gymnastics along the way, then holding off challenges from the likes of USAC national champions Justin Grant and Brady Bacon during the final five lap stint to win the $15,000 prize.

Larson’s BC39 victory was the 24th win of his USAC NOS Energy Drink National Midget career, moving him inside the top-20 on the all-time list in his CB Industries/PristineAuction.com – K & C Drywall – Billy Boat Performance Exhaust/Spike/Speedway.

“These midgets are so fun and fun on a track like this,” Larson said of the quarter-mile dirt track inside turn three of the famed 2.5-mile IMS oval. “This is the perfect midget track. They did such a good job building this place, the size, the dimensions, the banking, the dirt, everything, the track prep is great. Hats off to the whole crew here. That was so much fun.”


Starting fourth, Larson (Elk Grove, Calif.) remained relatively status quo as he remained hovering in the fourth and fifth positions for the majority of the first half of the race while a succession of leaders took their turns at the front with Grant controlling the opening circuit before Pursley got a drive off the fourth corner to race past and into lead on the second lap.

Grant didn’t surrender easily, however, reassuming the top spot back under Pursley between turns one and two. Yet, Pursley secured the position for good by the time the two reached turns three and four moments later.

Barging onto the scene in short order was fifth starting Thomas Meseraull who surpassed Grant, then immediately began his assault on Pursley for the lead, which saw him come within a foot of leading at the line on lap seven when eighth running Chris Windom dug into the third turn cushion and tumbled. He was okay.

Holding a one-second lead throughout the next several laps, Pursley connected with the cushion multiple times, resulting in Meseraull closing right to the rear bumper of Pursley. On the 17th lap, Pursley snagged the turn four curb with a mighty force, knocking him off his course and giving free reign to Meseraull to charge under for first while Larson elevated from fourth to third to second in a two-lap span between laps 17-19.

Larson worked the high side while Meseraull hammered his stake to the bottom. On the 22nd lap, Larson used the fence to surge ahead of Meseraull by a wheel at the line. The next time around, the infield tire-dwelling Meseraull drifted from bottom to top at the exit of four. Larson was prepared, and immediately swung to the bottom off turn four, straight-lining to the entry of one with the top spot in his possession.

Over the next handful of laps, the pair swapped their lines. Anywhere they could do to find a shot to get passed, the opportunity was taken. Banging the cushion or bouncing off the wall, nothing was out of bounds in this endless tug of war that saw Meseraull rise back to the top of rung while simultaneously drifting side-by-side up to the top of turn four when Larson clobbered the curb, knocking him askew and taking the door off the hinges for Meseraull to revisit the front yet again with 15 laps remaining.

Extending his lead up to 1.118 seconds with five laps remaining, Meseraull seemed to be in tip-top shape, all things considered, possessing his biggest lead yet while Larson and Grant both lost ground while engaging in their own thrill show for the runner-up spot.

With that being said, everything you thought you knew about this race up until that point had all turned to a figment of the past when seventh running Cannon McIntosh spun and stopped with five laps to go in turn three.

On the lap 35 restart, Larson utilized a massive drive off the bottom of turn two to overtake Meseraull, then aimed straight for the top of turn three while Meseraull took the slider line through the middle, and Grant took a variation of a slider line off the bottom, all at full-slide, three-wide, up to the turn four wall. Meseraull and Larson subsequently banged right rear to left rear wheels, sending Larson bouncing off the wall and Meseraull into a 180-degree spin with his front end knocked out.

That signified “game over” and instant heartbreak for Meseraull after leading 16 laps, the second consecutive BC39 feature in which he’s led the most laps, after heading the field for 18 in 2019.

“It’s hard to get away from people here,” Larson explained. “The entry is so long around, and the bottom is so far in, that they can throw sliders. I got by TMez there, and I tried to shut the door in one and two, but I didn’t get down there low enough. He obviously knew to get to the top at that point and I thought the race was over, but we got some restarts there and I did an okay job. Then, we just got to sliding each other. It was chaos, but a lot of fun from my seat.”

Upon the resumption, Larson began sliding himself into turns one and three where he intended to enter on the bottom, then slide up to the curb at the top of the turn on exit. But that proved perilous and troublesome for Larson coming to three to go when he snaggled the turn four cushion, sending him stumbling for balance. Seemingly coming from off the grid was Brady Bacon who exploded into second on the low side, a half car length behind Larson at the line with a mere half car length back at the stripe.

On the back straight of lap 37, the race was now three-wide with Bacon on the bottom, Larson in the middle of the sandwich and Grant riding the wave up against the concrete. Larson and Grant touched wheels at the entry of turn three while Bacon ducked under both to put himself momentarily with a car length lead until Larson gathered it back up and nipped Bacon at the line by a slim, slim margin.

With Tom Hansing’s white flag just within sight, Grant made a monster run at Larson in turn three, sliding all the way across the nose or Larson, bouncing his right rear tire off the outside wall as Larson crossed over, drove back under Grant as well as Bacon who still remained down in the trenches, securing the line around the infield tires.

Akin to breathing through a straw at this point in time, Larson found no breathing room whatsoever as he used the momentum off the top on the final lap to put away Bacon on the bottom of turns one and two while Grant was just a tad too far back to make one more banzai run into turn three.

Larson sped under the checkered flag 0.220 of a second – a single car length – ahead of Grant, with Bacon third, Pursley fourth and KSE Racing Products Hard Charger Emerson Axsom rounding out the top-five after starting 19th on the grid.

“I had a lot of thoughts running through my head on what to do, but I kind of screwed it all up that whole last restart,” Larson recalled. “I slid myself a few times, and I shouldn’t have been doing that, but I knew Justin was running the top of one and two there. I slid myself and slammed the curb every time in four, and then Brady got to my inside. Justin was there and slid us, or something. It was wild. I did not do a good job that last restart but, thankfully, I put a decent last lap together and snuck away with the win. I’ll take it. It’s cool to win this race in honor of Bryan (Clauson). This event’s grown into something really big and I’m glad to be a part of it.

Justin Grant (Ione, Calif.) freely admitted he wasn’t all that great early in the feature, but once it got on the fence, he felt he was pretty equal with Larson, but in the end, came up a little bit short to earn his third consecutive top-two feature finish with the series in his RMS Racing/NOS Energy Drink – EnviroFab – Response Management. Services/Spike/Speedway Toyota.

“Man, I hate running second to this guy,” Grant said of Larson. “I tell you what. I don’t have to tell you he’s good. But man, he’s good. Playing the slider game, and doing that back and forth, he does it as good or better than anybody. It’s tough to get him beat. We had a couple chances there and didn’t get them played quite right. I had to take a pretty big bomb to get out in front of him there in three and four and I killed the motor; I hit the cushion. Just a ton of fun, but I hate running second. I don’t care who it’s too. It really bums me out. I like winning races.”

Brady Bacon’s bid to become the first two-time winner of the BC39 came in a third-place performance in his TKH Motorsports/Dahmer Powertrain – Fatheadz Eyewear – Champion Oil/Triple X/Stanton SR-11x. Settling in on the low line, the 2018 race winner nearly pulled it off after deciding early on that the high line wasn’t going to be his thing on this night.

“I tried the top a couple times and I’m like ehhhh, I don’t think I’m going to get it done up there, so I started making some adjustments, trying to make my line good on the bottom. We actually started keeping up and, when they were racing with each other, we could gain ground. I think I almost led a lap there, and almost snuck in for the win. That was my game plan and I think if we could’ve run a couple better laps there at the end, I might’ve had a shot. They can slide or die all they want, but I’m not going to do that. I’m going to try and outsmart everybody, and we came close tonight.”