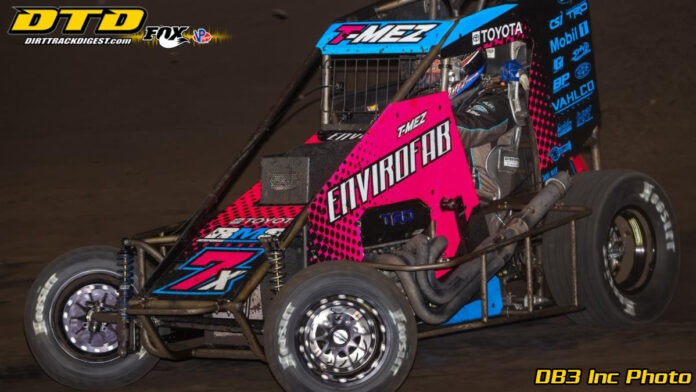 BRANDON, SD – With the checkered flag in his sight, Thomas Meseraull resigned himself to a third-place finish in Friday night’s Huset’s Speedway USAC Nationals feature for the NOS Energy Drink National Midgets in Brandon, South Dakota.

Running inside the top-five throughout the first 29 laps, Meseraull saw his hopes of victory dashed on the final lap as leader Chris Windom and a surging Mitchel Moles raced into the distance on the back straightaway while Meseraull seemed destined for a third-place fate.

However, divine intervention swept over the speedway in the form of a yellow flag for Meseraull due to Cannon McIntosh’s stop in turn two which brought about not only a halt to the race, but also sent Meseraull back to second and provided him another shot with a green-white-checkered bout waiting ahead for the first series race at the track since 1996.

Meseraull assaulted the cushion as Windom altered his route by taking the low line into turn one on the lap 30 restart. Without hesitation, Meseraull stuck to his guns and charged around Windom, ultimately completing the pass at the exit of turn four coming to the white flag.

Not to be denied, Meseraull locked it up on the final lap by turning his best lap of the contest on the 31st and final lap to win the $5,000 prize by a 0.672 second margin in his RMS Racing/EnviroFab – Response Management Services – Engler Machine/Spike/Speedway Toyota.

The San Jose, Californian led 16 laps of the BC39 at The Dirt Track at IMS before an incident knocked him out of the event while racing for the lead with less than five laps to go. In his most recent start last Sunday at Wisconsin’s Angell Park Speedway, Meseraull led the first 22 before giving way to Thorson to whom he finished second.

After leading 38 of the 69 laps in his last two USAC NOS Energy Drink National Midget starts, all Meseraull was asking for was a little luck, a bit of a break, to help guide him to a long-awaited checkered flag. Just like he drew it up. Well, maybe not exactly.

“We had a little bit of luck go our way,” Meseraull proudly stated. “We’ve been so good lately; we were second last week, and we’ve just been plugging away. The last five nights, I feel like we had the fastest car and, tonight, I felt like we were going to run third. We opted for a harder tire, and it looks like it played out to our advantage. Hats off to my guys for making the right calls tonight.”

While the ending belonged to Meseraull, the first two-thirds of the race was all Kevin Thomas Jr.’s, who boasted a solid lead early on from his outside front row starting position. His Petry Motorsports teammate, Emerson Axsom, however, fell to trouble early while running 10th as his car went up smoke before one lap was even completed, dropping him from nine points down in the series championship race to 47 behind point leader Buddy Kofoid.

As Thomas was controlling the head of the pack, Meseraull was charging up through the field from his sixth starting position, sliding Kofoid for fourth on lap nine in turn one, then subsequently drifting by Daison Pursley for the third position exiting turn four on lap 11.

At the midway point, Windom swarmed Thomas Jr. and the two exchanged the lead multiple times for a two-lap span on both ends of the racetrack with Windom sliding Thomas and Thomas countering each and every uppercut by racing back by to resume his position in the lead.

Finally gaining a semblance of breathing room from Windom over the ensuing laps, Thomas maintained a four to five car length advantage over Windom as he entered on the turn three cushion, just as he had done to perfection the previous 21 trips this evening around the 1/3-mile dirt oval.

This time, however, was something quite different. Thomas’ right rear tire went down on the entry, sending him into the outside wall. Now driving on just the rim, Thomas coasted to a stop, putting him out of the race with a 19th place finish.

Lurking behind Windom just prior to the yellow was Meseraull who was now elevated to second for the restart, but not for long, as it turned out, when Fatheadz Fast Qualifier and new one-lap track record holder Shane Golobic charged under to move into second.

Meseraull tapped Golobic’s rear bumper on the back straight with five to go, just to let him know he had no intentions of going away. A lap later, Meseraull delivered by ripping around the outside of Golobic at thee exit of turn four on lap 27.

On the final lap, Meseraull took one last shot at Windom in turn one with a slider, coming up just a tad short in his bid before falling back into line. Meanwhile, the two Matt Wood Racing cars driven by Golobic and Moles were firmly planted on the bottom and digging.

Moles, quite appropriately, was the one who hit paydirt by getting a drive past both Golobic and Meseraull in turn two, then quickly ran down the high-riding Windom in turn three just as the initial call from race control came over the radio to throw the yellow for the stopped car of ninth running Cannon McIntosh in turn two.

With the field re-racked for a final two-lap dash to the checkered, Windom was the leader with Meseraull second, Golobic third and Moles back to fourth due to the running order being reverted back to the last completed lap.

When action resumed, Windom altered course and shot right to the bottom of turn one while Meseraull carried onward on the top, gliding by around the outside to occupy the lead once and for all to get the victory over Windom, Golobic, Kofoid and Daison Pursley, while Moles slipped back to sixth.

“I was kind of surprised to see him go to the bottom other than the Wood guys who were working on getting us, but that’s what those guys do. They’re good on the bottom everywhere, every year. But momentum is key, and I just ripped the lip.”

It was a tough pill to swallow for Chris Windom (Canton, Ill.) who seemed to be in position to win his fourth of the year aboard the CB Industries/NOS Energy Drink – PristineAuction.com – K & C Drywall/Spike/Speedway Toyota. Yet, he chose to alter his path on the final restart, heading to the bottom after being right on top practically all throughout.

“I just completely gave that one away,” Windom admitted. “I tried to save my tire on the top, then the Matt Wood Racing cars started making the bottom work. I thought that, on a restart, it might work for one lap down there as we were coming to green-white-checkered. I just screwed myself and I should’ve stayed on the top where I was good. I’m pretty disappointed leading all that, saving my tires and losing it. But it is what it is.”