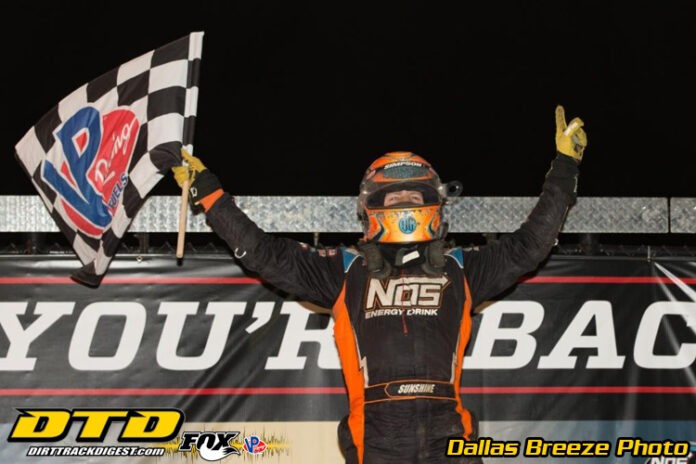 Prior to Tyler Courtney, no driver had ever won three-straight USAC NOS Energy Drink National Midget races at Eldora Speedway.

The former was achieved back in May and the latter on Friday night as the Indianapolis, Ind. native tracked down race leader Chris Windom near the halfway point of the non-stop, green-to-checker 25-lapper to win Friday night’s #BeFourTheCrowns presented by NKT.TV feature event, backing up his two previous wins at the Big E in 2018 and 2019.

“This is only our second time running the midget this year and (car owner/crew chief) Tim (Clauson) was on it,” Courtney praised. “It’s cool to put this car back in victory lane, especially here at Eldora. This is a tough weekend, especially with everything I’m trying to do. To get it off on the right foot is definitely really special.”

Making just his second series appearance of the year in his Clauson Marshall Racing/NOS Energy Drink Turbo – ZMax Race Products/Spike/Stanton SR-11x, Courtney started his race from the third position and remained stagnant in the position while Windom pulled out to the lead from the pole and outside front row starter Emerson Axsom waged a battle on the bottom of the surface.

Windom continued to work up high, right rear tire right up on the outside wall, while Axsom put his left rear to the wall on the bottom to close within a car length of Windom at the start/finish line at the conclusion of lap five.

In the meantime, Courtney had been making steady and gradual inroads on Axsom. As Axsom shifted his focus to the top at the flag stand on the ninth lap, Courtney instantaneously undercut Axsom and shot to the bottom of turn one, gliding past the Eldora first timer for the runner up position.

Henceforth, Courtney put the scope on Windom, rattled the rubber against the outside wall as he pursued his prey. That moment came on lap 12 when Courtney lunged forth on the bottom of turn three, drifted upward to the wall, then subsequently slid himself through the middle in the first turn a half-lap later to prevent any sort of an attempted comeback from Windom.

“It’s a big momentum thing, so I knew he was probably going to try and come back,” Courtney admitted. “I felt really good going across there when I slid him the first time. I know I needed to close the door on him so he couldn’t slide me back. I really love racing with Chris, and I haven’t gotten to do it a whole lot this year.”

Within just a few laps, Courtney constructed a demonstrative 10-car length lead that proved to be insurmountable down the stretch as he threaded through the tail-end of the field without any hiccups, as smooth and steady as the constant stream of water at Ludlow Falls.

For Courtney, and those who came before him who are the best of the best at Eldora, the high line is where it’s at. It’s what sells T-shirts, makes race fans swoon, and what makes legends out of mere mortals. And it makes winners, as evidenced by Courtney who once again became just that on this night in a fourth different type of car at Eldora all within the last four-and-a-half months: USAC Midget, USAC Sprint, USAC Silver Crown car and World of Outlaws winged sprint car.

“I wasn’t quite sure there at the beginning of the race, but I knew, if it kept getting higher over there, (the track) was going to keep coming to us,” Courtney explained. “We were a little tight at the beginning, so I knew it was going to come to us at the end there. Luckily, I caught Chris and Emerson there at the right time where I passed them and didn’t have to worry about them passing me back.”

Logan Seavey (Sutter, Calif.) turned up the wick late, charging under, past and by Windom for the runner-up position coming to the white flag after working on him for the entire second half of the race in his Tom Malloy/Trench Shoring – Rodela Specialty Fabrication/King/Ed Pink Toyota. The end result turned out to be his third top-three USAC Midget finish at Eldora in three career starts.

“I felt like, in open track, I needed to clear him in three and four, and I could just never do that,” Seavey detailed of his pursuit of Windom. I was really good through the middle, but then it made me struggle to get across the front stretch to get back to the top to get into one. I was giving up a lot getting into one with what I was doing, but a lapped car backed it down at the perfect time and I was able to hit the bottom there off four and go by him.

I definitely didn’t expect to move down off the wall at all,” Seavey continued. “But my car was really good on the top in one and two and right through the middle in three and four. This is the first time for these guys even seeing this racetrack and we ran second and I think we were really close. We were really close all day, just a tiny bit off quick time and second again in the feature.”

“I felt like I was pretty good the first part of that race, then I think my tire went away a little more than these guys after looking at them in victory lane,” Windom observed. “Obviously, Tyler is really good here and those two factors didn’t help us at all. I think we’ll be good for tomorrow night, though. This car is rolling; we’ve got to be a little better to beat him, but I think we’ll be there.” 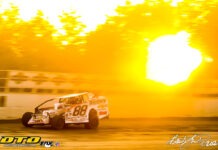