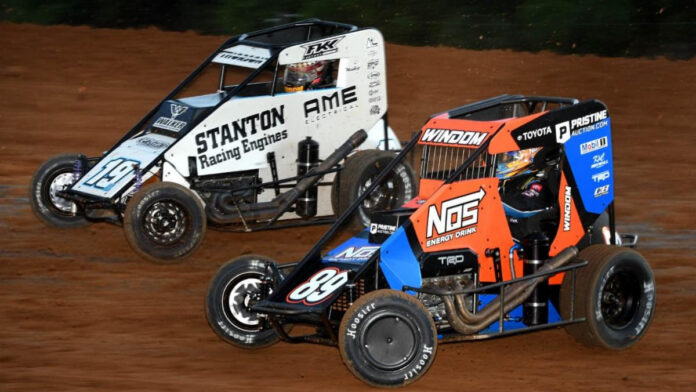 SPEEDWAY, IN – For the first time in 18 years, two different drivers have surpassed the six-win mark during a USAC NOS Energy Drink Midget National Championship season.

And get this. That’s with, still, 11 events remaining on the schedule.

Tanner Thorson (Minden, Nev.) leads all drivers this season with seven feature victories while Chris Windom has been en fuego of late, having recorded wins in three of his last four series starts to raise his tally to six entering this weekend’s double slate of events on Friday, October 8, at Wayne County Speedway in Wayne City, Ill. and on Saturday, October 9, at Tri-State Speedway in Haubstadt, Ind.

In recent years, dueling six-win drivers have been more of an anomaly with just four past occurrences over the past 25-year span due to a concurrence of more parity at the top of the field in terms of equipment, and also having schedules that consist of a few less races, with 41 on the schedule in 2021, still the most since 1988.

Plenty of time remains this season for a third different driver to hit the six-win mark, which would be the first time since 1977, when Johnny Parsons (10), Rich Vogler (6) and Sleepy Tripp (6) all collected their fair share. The most prime candidates, at the moment, include four-time winner Buddy Kofoid as well as three-time victor Thomas Meseraull.

An all-time record of five drivers were at the six-win level in 1969, which is the second-largest season of total races in USAC National Midget history. Seventy-seven races were held that year with Mel Kenyon (14), Bob Tattersall (11), Bob Wente (8), Lee Kunzman (8) and Mike McGreevy (6) winning most often. Of note, a record 79 USAC National Midget events were held in 1964.

A hot streak this weekend, and/or out west in November, can put this year’s talented crop at the forefront of history. We’ve already gotten our taste of it with its first occurrence in nearly two decades. Now, we see who else can join in on the fun.

Friday’s 8th running of the Jason Leffler Memorial at Wayne County Speedway in southern Illinois features the USAC NOS Energy Drink Midget National Championship, Hyper Non-Wing Outlaws, A-Class Non-Wing Non-Wing, Restrictors and Junior Sprints. Pits open at 3:30pm Central, grandstands at 5pm, drivers meeting at 5:30pm and hot laps at 6:30pm. Tickets are $25 for general admission and free for ages 12 and under. Pit passes are $35 while kids age 10 and under are $20.

YEARS OF MULTIPLE DRIVERS WITH 6 OR MORE USAC NATIONAL MIDGET WINS IN A SEASON: