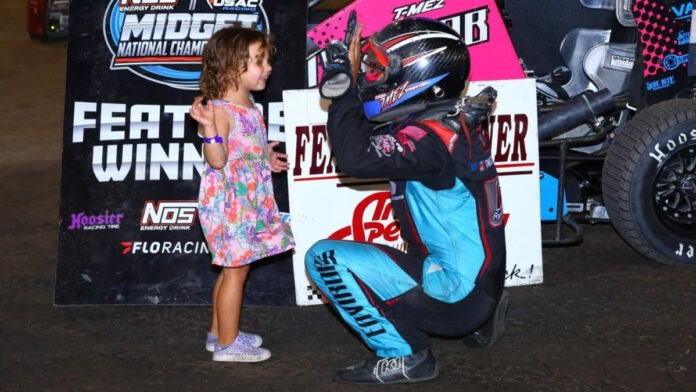 HAUBSTADT, IN – Throughout the past calendar year, Thomas Meseraull has made a habit of changing the narratives at Haubstadt, Indiana’s Tri-State Speedway.

During Saturday night’s Harvest Cup, Meseraull, henceforth, became the first driver ever to score multiple USAC National Midget victories at the track, ending a string of 12 series races held at the 1/4-mile dirt oval since 1969 in which a different winning driver emerged each and every time.

“I thought before the race that we could win this; we’re going to win this, but then I also thought, I can come back on the hook too,” Meseraull pondered. “I’m super pumped we didn’t come back on the hook with the RMS Racing number 7x. It’s the last race of the year in the Midwest; we won it last year and we picked it off again.”

Meseraull started seventh in the 22-car field aboard his EnviroFab – Response Management Services – Engler Machine/Spike/Speedway Toyota, initially dropping back to ninth on the opening lap before making a methodical march through the pecking order, one position per lap, to slide into the top-five by lap five.

“It’s so tricky,” Meseraull observed. “It’s tough because I started peddling it there and I moved back a couple spots. Then I burned it in there wide open and got the right rear to stick and then just started doing that. When in doubt, stand on it.”

Nearing midway, Thomas Jr. maintained full control up front after starting his race from the outside of the front row alongside pole sitter, Daison Pursley, all while a Haubstadt-style shuffle was raging for second, third and fourth among Buddy Kofoid, Cannon McIntosh and Meseraull.

McIntosh handily slid past Kofoid for the runner-up spot on laps 12 and 13 in turn three while Kofoid was able to regain the second position with a similar cadence on the turn one and two end of the track.

On lap 14, however, the jockeying came to a head after Kofoid returned the favor in turn three by executing a slide job of his own on McIntosh, successfully drifting up to the cushion in turn four. But when McIntosh crossed over to the inside of Kofoid, and a surging Meseraull used a momentous run of the bottom, it created a sandwich effect which resulted in congestion and indigestion as McIntosh and Kofoid came together, sending Kofoid nose first into the outside wall before tumbling down the front straightaway.

Kofoid was more than okay as his car was taken to the work area and quickly repaired by the Keith Kunz/Curb-Agajanian Motorsports crew which sent him back onto the track for the restart, after which he promptly drove back into the top-10, ultimately finishing 9th but putting a slight dent in his pursuit of the series championship, falling 13 markers behind point leader Chris Windom after trailing by just two coming in.

As soon as the race resumed, Meseraull went nose to the grindstone, following the path of Daison Pursley who sprinted past McIntosh for second while Meseraull slotted into third.

Shortly thereafter, on lap 21, 13th running Ethan Mitchell walked away from a vicious flip between turns three and four. The Mooresville, N.C. driver had just picked up his fifth heat race win of the season earlier in the night.

At the head of the field, Thomas Jr. was in full pursuit of his first USAC National Midget feature victory triumph since the Western World Championships at Arizona Speedway in November of 2019, a span of 64 series events, yet Meseraull proved to be the naysayer in that regard as he posted his bid underneath Thomas at the exit of turn four on lap 23 with both slightly banging wheels, sending Meseraull scurrying sideways as he passed the stripe, still on the gas and still on the prowl.

Meseraull never ran astray from the bottom, and on lap 25, the persistence paid off as he launched past Thomas Jr. for the lead coming off turn two, just like he drew it up and how he figured it would all pan out.

“I’ve run second here enough to know that the bottom kind of comes back,” Meseraull explained. “What a great race (Thomas Jr.) ran, but he was out front. He couldn’t really see, and it’s hard to make changes when you’re out there. You just keep doing what you do.”

On the final restart, the final five laps saw Meseraull treading the bottom while Thomas Jr. ringed the outside but was unable to make up any ground as he simultaneously fought to fend off Justin Grant for the runner-up spot. Meseraull finished his endeavor a car length and a half in front of Thomas Jr. at the checkered, 0.207 seconds ahead, with Grant third, Daison Pursley fourth and point leader Chris Windom fifth.

Meseraull pocketed the $4,000 winner’s share while Thomas Jr. (Cullman, Ala.) led a race-high 24 laps in his Petry Motorsports/West Side Tractor Sales – Gray Auto/Bullet By Spike/Speedway Toyota, explaining that he just couldn’t stick the bottom as good as Meseraull could at the end. In the end, Thomas Jr. equaled his best result of the year, a 2nd place finish which he also achieved on two previous occasions this year.

Grant’s night was a true roller coaster ride from start to finish. The Ione, California native broke something in the valve train as he was being pushed off for hot laps. A spare car was rolled out of the trailer, which Grant put in the main event by transferring through the heat.

In qualifying, Tanner Thorson (Minden, Nev.) earned his 22nd career Fatheadz fast qualifying time with the series, passing Don Branson, Tony Stewart and Shorty Templeman for 18th on the all-time list. His time of 13.266 seconds also surpassed the former track record held by Chris Windom, which was set in June of 2021 at 13.377.

Furthermore, Meseraull’s time of 2:17.42 in Competition Suspension, Inc. heat race two broke his own decade-old 10-lap USAC National Midget track record at Tri-State Speedway. The time bested the former record of 2:20.38, which had been in the books since 2011 courtesy of Meseraull.