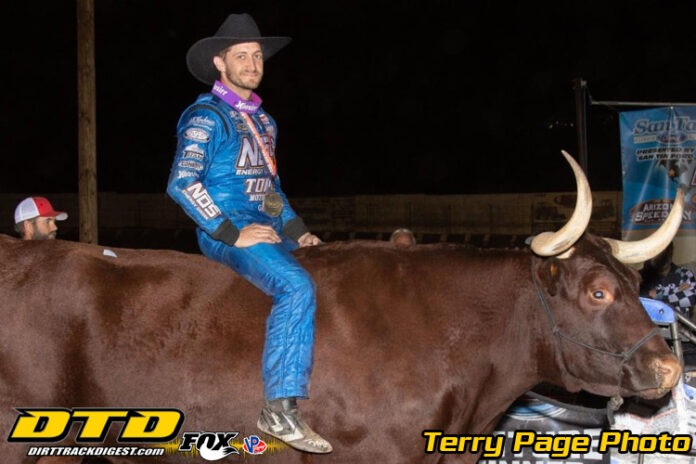 SAN TAN VALLEY, AZ – Friday night at Arizona Speedway, Justin Grant made it his personal mission to dispel an old, idiomatic proverb by proving that, yes indeed, you can have your cake and eat it too.

Grant’s 31st birthday happened to fall on the same day as the opener for the 54th annual Western World Championships Presented by San Tan Ford, opening the biggest and most prized present with seven laps remaining in the feature event.

It was there where the Ione, Calif. native charged around racelong leader Cory Eliason, then fended off Buddy Kofoid down the stretch to snag his second USAC NOS Energy Drink Midget National Championship feature victory of the year in his RMS Racing/NOS Energy Drink – EnviroFab – Response Management Services/Spike/Speedway Toyota.

Celebrating his seventh career series win was sweet and getting the opportunity to ride the steer in victory lane was just the icing on the cake, all fit for a driver who felt he was overdue for a follow-up triumph after last winning more than three months prior at Lanco in Pennsylvania.


“I haven’t won nearly enough in it, so it feels good to get a win tonight,” Grant exclaimed. “This thing was awesome, and I could just go to town, pounding the cushion there. It got pretty far around and pretty curby there in one and two. Buddy was running the bottom there and kinda showed me, and I was able to get back by him and get to the bottom. This thing could go anywhere.”

Before the 24-car field even reached turn one on lap one, eighth starting Emerson Axsom launched into a moon shot, gaining major altitude after flipping into the catchfence between turns one and two before landing hard on the track surface of the 1/3-mile dirt oval. Axsom managed to climb out and walk away under his own power.

Grant started from the pole position but found himself relegated to second on the opening lap to Eliason and, ultimately, to third just before the midway point as Logan Seavey pulled alongside on the back straightaway, then counterpunched Grant’s turn three slider by cutting a diamond back under at the exit of four to move into the runner-up position.

“I got off the bottom there on the start and I felt like, ‘man, this thing is pretty good,’” Grant recalled. “But the top got cleaner and faster than I thought it was going to. I tried to slide (Eliason) on a restart and got to bouncing and let Logan go by us.”

With just eight laps remaining, heartbreak hit the second-place car of Seavey whose right rear tire went flat entering the cushion in turn one. Seavey was unable to make the call for the restart, seeing his bid for victory end abruptly with a non-indicative 20th place showing, subsequently placing Grant back in the hunt in second place for the final eight lap flourish.

“I got to the top and just tried to pick my spots on the cushion there and see what made speed and what didn’t to start trying to track Cory down,” Grant explained. “I’m always better when the cushion gets cleaned off. Once it gets slick below, I can usually find some speed, so I just bided my time waiting for that slick line to get cleaned up to where I could pick and choose my marks and try to get this car to victory lane.”

That moment had its foundations rooted on the lap 23 restart when Grant followed Eliason through turns one and two, then dove to the bottom in three and four only to see Eliason counter back underneath and stave off Grant’s advance at the line by a single car length.

On this night, Eliason was making his first career USAC National Midget feature start, and the 2020 and 2021 All Star Circuit of Champions series runner-up looked the part of a seasoned midget racing vet 24 hours after turning the quickest overall lap in an open practice at the track on Thursday night.

But the seed had been planted within Eliason’s subconscious. Eliason immediately invaded the groove one lane off the bottom of turn one on lap 24, sending his car trampolining up the racetrack, allowing Grant, Kofoid and Kevin Thomas Jr. to zip by and occupy the top-three positions while Eliason free-fell to fourth.

Kofoid attempted to pounce immediately, charging to the low side of turn three and sliding past Grant only to see Grant cross over and motor back by. In turn one on the following lap, Kofoid flashed low, but Thomas Jr. got even lower, so low in fact that the infield photographers even felt the need to take a step back.

Clearing Thomas Jr. was Kofoid who regrouped, regathered and returned for another run at Grant with four laps remaining, sliding across the nose of Grant once more turn three, but only momentarily, as Grant answered the challenge, cut back under and regained the position at the exit of four, then beelined to the bottom of turn one, thus preventing a retaliating slide job courtesy of Kofoid.

That sequence ultimately sealed the fate for both Grant and Kofoid on the opposite sides of the coin. Thereafter, Grant stretched his lead out to eight car lengths over Kofoid, whose race transformed into a quest to keep Thomas Jr. behind him on the final lap, which he did quite successfully.

Henceforth, Grant was by his lonesome on the way to victory, like a vapor trail in the empty air, blowing out the candles with a 0.917 second victory ahead of Kofoid, Thomas Jr., Eliason and Tanner Thorson.

With his runner-up result, Buddy Kofoid (Penngrove, Calif.) erased a 13-point deficit to 6th place finisher Chris Windom for the lead in the USAC NOS Energy Drink Midget National Championship standings. He now finds himself tied with Windom atop the standings at 2,061 points with eight races remaining in his Keith Kunz-Curb-Agajanian Motorsports/Mobil 1 – TRD – Toyota/Bullet By Spike/Speedway Toyota.

**Emerson Axsom flipped on lap 1 of the feature.