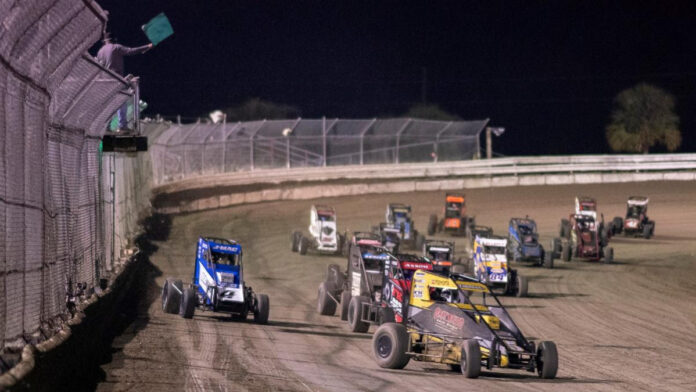 Exactly 76 days following our last glimpse of USAC NOS Energy Drink Midget National Championship action, the series hits the dirt for the first time in 2022 to begin its 67th season of competition this weekend, February 11-12, at the 3/8-mile D-shaped track located in the northern region of the Sunshine State.

The 13th installment of Winter Dirt Games marks the dawning of a new year and a slew of new combos, new drivers and new expectations starting with Friday’s opener paying $4,000-to-win and Saturday night’s finale, in which the victor will receive $5,000.

This weekend marks the seventh and eighth USAC National Midget events to be held at Bubba’s, dating back to the series debut there in 2019. Three one-time Ocala winners will be jousting to repeat their previous accomplishments when the time comes this weekend: Buddy Kofoid, Tanner Thorson and Thomas Meseraull.

Buddy Kofoid (Penngrove, Calif.) enters as the defending series champion and as the reigning opening night/day winner at Ocala. In four starts there, he’s yet to finish outside the top-six, with a 3rd and 6th in 2020, to go along with a 1st and a 3rd in 2021 for Keith Kunz/Curb-Agajanian Motorsports.

Tanner Thorson (Minden, Nev.) has started all six previous USAC National Midget races held in Ocala. The 2016 series champ was victorious in the 2020 season opener in dominating fashion. Thorson, who recently captured the victory in January’s Chili Bowl Midget Nationals for Reinbold-Underwood Motorsports, finished as the runner-up in the 2021 Ocala opener to Kofoid. His qualifying time of 13.724, set in 2020, still stands as the one-lap USAC National Midget track record at Ocala.

Thomas Meseraull (San Jose, Calif.) has won both a USAC AMSOIL National Sprint Car and USAC National Midget feature at Ocala, getting the latter feat completed in the 2021 finale while leading all 30 laps. He finished a decent 6th in the 2021 opener. His USAC Sprint Car expertise at Ocala resulted in a victory during a last lap shuffle back in 2016.

Kevin Thomas Jr. (Cullman, Ala.), likewise, picked up his first Ocala USAC National Sprint Car feature triumph on the opening night of 2021. Wildly enough, last year, KTJ became the first driver ever to record the fastest qualifying time during the USAC National Midget season opener in three consecutive years and will try to extend it to four years running this weekend. He also swept both night’s feature victories with POWRi at Ocala in 2018, was 2nd on both nights with USAC in 2019, was 7th & 4th in 2020 and 10th in 2021, with nary a finish outside the top-ten.

The newly combined forces of Dave Mac Motorsports and Robert Dalby have resulted in Dave Mac-Dalby Motorsports, which will field both Thomas Jr. and series full-timer Cannon McIntosh (Bixby, Okla.) in Ocala. McIntosh led the first three laps during night two at Ocala in 2020 and finished 5th on both nights the very same year.

Logan Seavey (Sutter, Calif.) ended the 2021 USAC season as the first driver to win the final dirt race of the season in all three of USAC’s National open wheel series, including the Turkey Night Grand Prix at Ventura (Calif.) Raceway last November. He’d like to lead off in very much the same manner in 2022 at Ocala where the 2018 USAC National Midget champ has made starts in all six previous visits with the series at Ocala, garnering a best result of 8th on night two in 2019.

Keith Kunz/Curb-Agajanian Motorsports brings six cars to the first dance, with all but one having previous Ocala experience. Joining Kofoid on the team are Kaylee Bryson (Muskogee, Okla.), a 16th place finisher in 2021; Taylor Reimer (Bixby, Okla.), who collected a heat win and an 18th place result in her 2021 debut; Bryant Wiedeman (Colby, Kan.) scored a 12th in 2021; while Brenham Crouch (Lubbock, Texas) possesses a 15th place finish from 2021.

Four women will be in this weekend’s field. Along with Bryson and Reimer on team KKM is series Rookie Mariah Ede (Fresno, Calif.), who is looking to make her first career series feature start after a handful of appearances on the west coast late last year.

CB Industries’ Jade Avedisian (Clovis, Calif.) earned one of the best finishes ever by a woman with the series in 2021, taking 4th at Merced (Calif.) Speedway. This weekend will be her Winter Dirt Games debut as it will for the entire cast of Chad Boat’s all-Rookie team. Joining her are 2021 Turkey Night Grand Prix 3rd place finisher Mitchel Moles (Raisin City, Calif.), Jace Park (Overland Park, Kan.) and Dominic Gorden (Clovis, Calif.).

Ethan Mitchell (Mooresville, N.C.) is an Ocala USAC Midget veteran, having made four career starts in the events between 2019 and 2021. Fellow Winter Dirt Games returnees also include Hayden Reinbold (Gilbert, Ariz.), who is still seeking to crack the lineup for his first starting field at Ocala, and Oliver Akard (Fort Myers, Fla.), the lone Floridian in the field., who finished 14th in 2020.

Florida and USAC Midget racing have a history dating back to the initial years of the club. Only 24 times have USAC Midgets ventured to Florida over the years. Prior to the 2019 visit to Bubba’s, the series took part in a 11-race series entitled the Tangerine Tournament in early 1957. Jimmy Knight, Sonny McDaniel, Andy Linden, Al Keller, Al Alpern, Leroy Warriner and Len Duncan were among the winners held at several different Florida venues. Linden took home the overall Tangerine Tournament crown.

USAC Midgets took on the pavement of New Smyrna Speedway for two nights in 2013, won by Bobby Santos and Kyle Larson. The first full USAC National Midget points races in Florida came in a weeklong span during 1963. Johnny Riva and Bob Wente were victorious at Palmetto Speedway while Chuck Rodee and Wente also picked up victories at Golden Gate Speedway. It was another 42 years before the series returned in 2005 for a non-points special event at Orlando Speed World Speedway, won by Josh Wise.

The second half of WDG brings on the beginning of the USAC AMSOIL National Sprint Car season Feb. 17-18-19 at Bubba Raceway Park. A practice night on Feb. 16 will precede the three nights of racing from 7-10pm ET. Grandstand admission is free for practice. Pit passes are $20 apiece.

Each night, adult general admission tickets are $30 with kids age 11 and under are free. Pit passes are $40 apiece. Race day tickets will be available at the gate on race day. No pre-order is necessary.