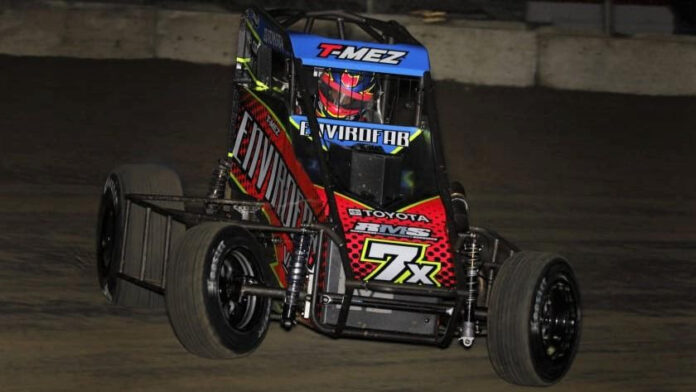 OCALA, FL – After capturing the victory in last year’s Winter Dirt Games finale, Thomas Meseraull picked up right where he left off.

Meseraull took his RMS Racing/EnviroFab – Response Management Services – Engler Machine/Spike/Speedway Toyota straight to the top of the charts on Thursday with a time of 14.561 mph. Second was Franklin, Indiana’s Emerson Axsom, debuting for Clauson Marshall Racing, at 14.682. Third was Sutter, California’s Logan Seavey for the Tom Malloy-owned team at 14.688.

Cannon McIntosh (Bixby, Okla.) occupied the fourth and fifth spots in the session in two different Dave Mac Dalby Motorsports cars. The faster of the two was the No. 08x at 14.703, which will be piloted by Kevin Thomas Jr. for both of this weekend’s races. In his own No. 08, McIntosh laid down a 14.729 to round out the top-five.

Twenty-four cars took time during the three-hour session, including defending USAC National Midget driving champion, Buddy Kofoid, who was ninth overall at 14.796, the fastest of six Keith Kunz/Curb-Agajanian Motorsports cars in the field.

Winter Dirt Games XIII begins with the 2022 USAC NOS Energy Drink National Midget openers on Feb. 11-12 at Bubba Raceway Park in Ocala, Fla. Pits open at 4pm ET, front gates open at 5pm and cars on track at 6pm with qualifying and racing immediately following. Adult general admission tickets are $30 with kids age 11 and under are free. Pit passes are $40 apiece. Race day tickets will be available at the gate on race day. No pre-order is necessary.

Each and every night of Winter Dirt Games XIII can be watched LIVE on FloRacing at https://bit.ly/3frPoW6.