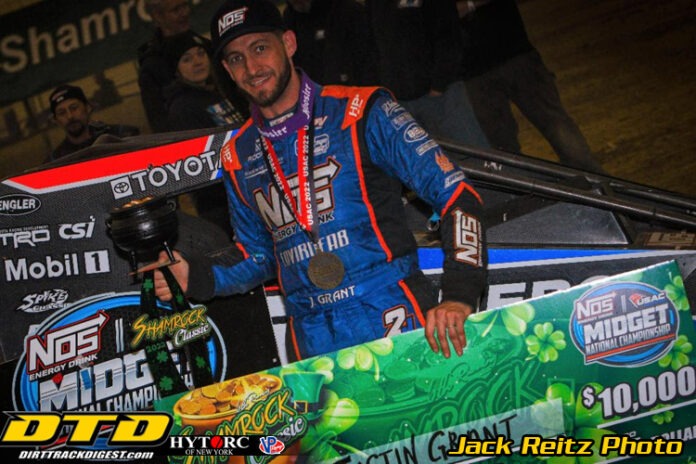 DU QUOIN, IL – While RMS Racing seemingly has a stranglehold of the competition at the Southern Illinois Center in Du Quoin, you might say that Justin Grant has a similar grip on the 2022 USAC season thus far.

On Saturday night, the Ione, Calif. native mastered both the high and low grooves and capitalized on teammate Thomas Meseraull’s early race misfortune to bag the $10,000 prize and become the first multi-time winner of the Shamrock Classic Presented by Dooling Machine Products at the 1/6-mile indoor dirt oval after previously winning the event back in 2017.

The victory makes Grant three for four in USAC-sanctioned Midget races during the 2022 season. He captured the non-points special event in Du Quoin after earlier sweeping both full-points paying features in February at Bubba Raceway Park in Ocala, Fla.

Meanwhile, RMS Racing has now tallied wins in each of the last five USAC sanctioned midget events its entered dating back to December of 2021. Three of those have come at the Southern Illinois Center with three different drivers behind the wheel. Christopher Bell scored the December 2021 Jason Leffler Memorial while Thomas Meseraull pocketed Friday’s Shamrock Classic opener followed by Grant’s reign on Saturday in his NOS Energy Drink – EnviroFab – Response Management Services/Spike/Speedway Toyota.

“I can’t believe it,” Grant exclaimed. “This midget has been so, so fast for the past year now. Tonight, we were able to get this car back to victory lane and keep RMS on top of everything so far this year; it’s been incredible. I’m getting to live my dream.”

As it turned out, the RMS pair of Grant and Meseraull were the top-two total point earners in Friday and Saturday’s preliminary events, which put both on the front row for Saturday’s 50-lap feature. With Grant on the pole and Meseraull outside, it was Meseraull who gained the early advantage as he sliced underneath Grant exiting turn two, then held the point in commanding fashion, quite reminiscent of his dominating display 24 hours earlier.

However, instead of striking gold, it was disaster that struck Meseraull on the 14th lap as he negotiated traffic. That’s when 16th running Kyle Cummins performed a half-spin at the high side entrance of turn one. With nowhere to escape, Meseraull plowed into Cummins, with both stopping. Grant narrowly avoided double RMS trouble as he bounced off Meseraull, then split between him and the 17th running car of Dominic Gorden. Meseraull was eliminated due to extensive damage on the right front while Grant took his place as the new race leader.

“My poor teammate, Thomas,” Grant tributed. “He’s fast every night, he’s one heck of a racecar driver and he’s on one of those rolls where nothing goes right. He’s way more supportive of me being in victory lane than I probably would be of him. I’d like to think I’d be as big as he is in these situations but he’s all about this RMS team, and as long as one of us is winning, Thomas is happy. I know he wants to be up here and, tonight, he probably should be. He just caught a really bad break there and I feel bad for him.”

With a new re-racked top of the leaderboard, Cannon McIntosh entered the fray to submit a challenge for the lead with Grant. On the 20th lap, McIntosh slid from bottom to top in turns three and four to assume the number one spot. Grant cut back under, but McIntosh managed to still nip him at the line by a half car length.

The run up front wasn’t long for the world as McIntosh slid wide as he attempted to close the door at the entry of turn one, allowing Grant to poke his nose back under and get a run down the back straightaway and into turn three. There, the two tapped wheels midway through three and four, and McIntosh subsequently floated over the cushion while Grant surged past underneath to retake the lead after a one-lap sabbatical.

As Grant opened a 1.2 second lead, McIntosh found himself fighting with Brady Bacon for the runner-up position. Bacon drifted under McIntosh for the spot on lap 30 entering turn three. McIntosh dove back under Bacon exiting the corner and the two went wheel-to-wheel, side-by-side into turn one. McIntosh momentarily became airborne as his right rear ramped over Bacon’s left front tire, sending both into a spin cycle, coming to rest just a few feet from the outside concrete barrier in turn one. Although it knocked both out of contention for the win, Bacon made a furious charge back to a fifth place finish while McIntosh restarted, but dropped out soon after, taking a 15th place result.

With 20 to go, Grant had a handle up front, but a group of new challengers waged a raging fight that saw Mitchel Moles find a spark to sprint from fourth to second as Ryan Timms and Chance Crum sought a way to fend him off. Nonetheless, Moles’ sudden spurt was suddenly kaput as he clipped the outside wall with his right rear tire between turns one and two on lap 33, sending him upside down and out for the remainder of the evening.

The ensuing restart saw Crum put a clamp on the second position as he flicked his machine under and past Timms in turn three, while Daniel Robinson did the same a lap later to take third from Timms, then set forth on tracking down Grant who occupied the lead.

Utilizing the bottom of the racetrack, Crum quickly closed right to the tail of the high-riding Grant, and even edged ahead by a car length on the 36th lap before Grant altered his gameplan, zipping by Crum around the outside on the back straight before cutting across Crum’s nose to steal the bottom away. Slight bumper-to-bumper contact between Crum and Grant in turn three was no harm, no foul, but it signaled a permanent changing of the guard at the head of the pack.

Grant doesn’t much care for rolling the bottom of the racetrack, but when the occasion arose and the large sum of money beckoned to bring it down from the top, he heeded its call.

“Here at Du Quoin, it flips really fast,” Grant said of the sudden change in the track’s preferred groove. “The bottom gets cleaned off and comes in really quick, and it’s tough with the lanes changing like that. I’m not very good at crawling the bottom; that’s not really my jam. I get worried when it starts doing that and, fortunately, I was able to bail across there.”

Following the final restart with seven laps to go after fourth-running Jace Park tangled and stopped in turn two, Crum stayed right with Grant but was mostly unable to gain any sort of headway down the stretch as Grant notched the win once more by a 0.875 second margin over Crum, Daniel Robinson, micro sprint feature winner Joe B. Miller and Bacon.

Chance Crum has now finished inside the top-10 in all three of his USAC-sanctioned Midget starts at the Southern Illinois Center. After a 3rd place result last December and a 9th on Friday, the Snohomish, Wash. native turned in his best performance of them all on Saturday night, starting 11th and finishing 2nd in his Rudeen Racing/Hager Realty Services – Rayce Rudeen Foundation/Spike/Speedway Toyota.

“I probably didn’t have enough to get him anyways, but we got close there,” Crum acknowledged. “I’m really thankful to be in that position to get to run with Justin there, and I feel like I learned a lot in that race.”

“I really thought I had a shot at them, but we made the most of it and I’ll take a podium,” Robinson stated. “We’ll win one of these someday.”

**Mitchel Moles flipped on lap 33 of the feature.