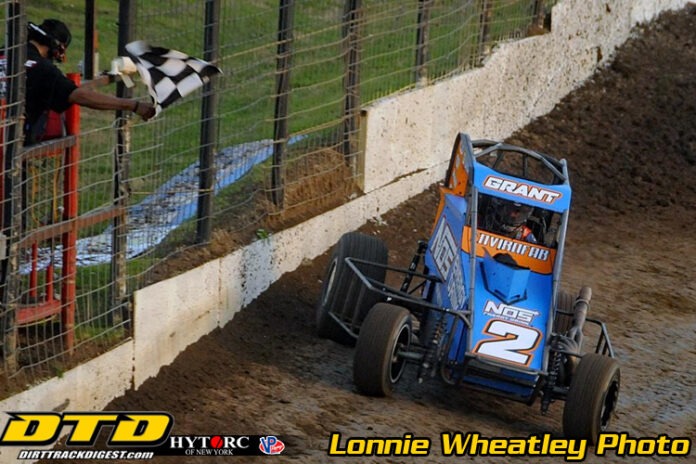 TULSA, OK – Throughout the first 66 years of USAC NOS Energy Drink Midget National Championship racing competition, the longest winning streak any driver had strung together to begin a season was two.

In year 67, a different story has been written as Justin Grant etched his name into the books as the first driver to capture three consecutive series feature victories to begin a season during the opening night of the Werco Manufacturing T-Town Midget Showdown Presented by Priority Aviation at Tulsa, Oklahoma’s Port City Raceway.

As it turned out, it was an unnaturally subdued celebration, especially for an unprecedented accomplishment in the annals of USAC National Midget racing. This all came about after an incident with eight laps remaining during the 30-lapper in which second running Grant and race-long leader Chase McDermand banged wheels in turn two, sending McDermand upside down and, ultimately, out of the race, ending his bid for a first career series victory in just his fifth career series start.

Grant, meanwhile, continued onward to victory for the third time in as many races with the series in 2022 and was greeted by a raucous display of umbrage from the throng of fans that filled the grandstands around the 1/8-mile as he stepped from his car in victory lane, eschewing his traditional can-to-helmet smash celebration in lieu of a public apology.

“I feel terrible with what happened there to Chase,” Grant admitted. “I tried to slide him eight, ten times there and never hit him. I just faded up behind him. (The officials) called yellow as I was peeling across on my slider, and I don’t know if he slowed up a little bit and didn’t get all the way to the cushion where he had been or if I just plugged him. Either way, I feel terrible about that. I feel like I crashed a guy under yellow, but it certainly wasn’t my intent. It’s good to win, but I hate to win them like that. I’m sorry it happened.”

McDermand, starting from the outside of the front row alongside Grant, blasted his way to the lead on the initial start and built a sizable four-car length lead over Grant in the early stages, which was interrupted by a lap three stack-up in turn four between Andrew Deal, Hayden Reinbold and Noah Harris. All stopped, but all resumed action.

Nearing halfway, McDermand continued to withstand the heat brought about by both Grant and third-running Kaylee Bryson to retain his position up front. Past halfway, traffic loomed both high and low, but McDermand, the three-time Badger Midget champion, ably split every gap, nook and cranny to glide between lappers while Grant was draped all over and ready to pounce and was able to slide even with McDermand on several occasions but was unable to complete the pass.

The complexion of the race drastically changed on lap 23 when the left rear wheel on 13th place Noah Harris’ ride jettisoned itself off his car, sending the now three-wheeled Harris flipping at the exit of turn two and, subsequently, collected Tanner Berryhill (16th), who also flipped, as well as Thomas Meseraull (18th), who both became innocent victims in the melee. Meseraull was the only one involved to restart, and promptly drove his way back to a 10th place result. As cars were refiring following the red flag period, however, sixth-running Tanner Thorson’s car fell victim to a mechanical issue, forcing him to the sideline.

Earlier in the night during Fatheadz Qualifying, Taylor Reimer became just the third woman in series history to set fast time on multiple occasions in her career, joining Sarah McCune and Bryson as the only other individuals to do so, all achieving the feat exactly twice. Reimer’s feature made an unfortunate turnaround, literally, in turns three and four nearly a full lap following the lap 23 restart, which saw her and Ethan Mitchell make contact while tussling for the seventh position, and resulting in Reimer spinning around to a stop.

Mere moments later, as the yellow was being displayed for the spinning Reimer, Grant attempted a slide job on McDermand for the lead between turns one and two. The contact between the two popped McDermand into the outside wall before toppling him over. A displeased McDermand raised both hands squarely in the direction of Grant, but the damage was done and McDermand was out of the race after leading a race-high 23 laps and relegated to an 18th place finish.

Grant’s main interrogator for the final restart was fifth-starting and defending T-Town winner Buddy Kofoid, who hounded Grant from the resumption on lap 23. With five to go, Kofoid was in hot pursuit, and attempted a slider on Grant that came up short. A bang of the cushion resulted in Kofoid’s loss of several car lengths and a half-second of ground between he and Grant. Another slam of the cush in turns three and four sealed the deal for Grant who closed out a 0.990 second victory over Kofoid, Bryson, Thursday’s Dash for Cash winner Cannon McIntosh and Logan Seavey.

Buddy Kofoid (Penngrove, Calif.) finished second on Friday night at to kick off his 2022 USAC National Midget season with three consecutive top-five finishes. In fact, it was his eighth straight top-five result with the series dating back to the end of last season in his Keith Kunz-Curb-Agajanian Motorsports/Mobil 1 – Toyota – TRD/Bullet By Spike/Speedway Toyota.

“I almost got to him one time,” Kofoid recalled of trying to track to down Grant late. “I felt like I got rolling really good on the top of three and four, where no one else really had. He kind of moved up when I tried to slide him, and I just wasn’t really good in the rough. I think we were just too soft and couldn’t get through the holes as good as we would’ve liked.”

“A podium is really cool, but I want to get a win; hopefully we do that this year,” Bryson exclaimed. “It’s pretty cool to be at my home track with my whole family here. I’m just having a blast.”