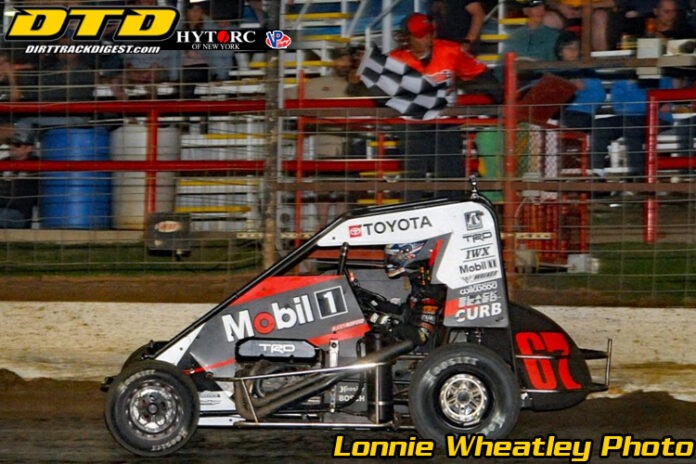 For the second consecutive season, the Penngrove, Calif. native captured the Saturday night 50-lap edition of the Werco Manufacturing T-Town Midget Showdown Presented by Priority Aviation at the Tulsa, Okla. 1/8-mile dirt oval, making the winning move on series Rookie Mitchel Moles just prior to halfway, then cruising to a victory worth $8,881.

Kofoid also became the first driver not named Justin Grant to stand in USAC National Midget victory lane in 2022 after winning a record three-in-a-row to start the season on Friday night. Kofoid had run second to Grant in that one but refused to play second fiddle again during Saturday’s finale aboard his Keith Kunz-Curb-Agajanian Motorsports/Mobil 1 – Toyota – TRD/Bullet By Spike/Speedway Toyota.

“Glad to finally put the kibosh on the 2J’s streak,” exclaimed Kofoid, the defending series champion. “Hopefully, we can start a streak ourselves.”

Yet, Kofoid’s main contestant on this night was pole sitter Moles, who was the standard bearer throughout much of the first half, withstanding an initial shot from outside front row starter Kaylee Bryson as she attempted a slider between turns one and two on the 13th lap, with Moles keeping his foot on the pedal and escaping to the outside in turn two. Bryson, now dropped back another five lengths, thusly had to fend off her KKM teammate Kofoid for the runner-up spot.

On a bullring such as Port City, you can catch traffic in a hurry, and there was no exception to that rule on this evening. By lap 20, the locomotive breath of Moles, Bryson and Kofoid were smothered in the gridlock. Rounding the top of turns one and two, second-running Bryson suddenly took a lindy hop, then washed up the racetrack at the exit of turn two, but the wall of voodoo sucked the right rear tire right smack dab into the concrete, turning her around 180 degrees and sending her rolling in reverse down the back straightaway. Her bid to win was closed, but she did manage to climb back to a respectable 9th place result after restarting from the tail.

Upon the lap 20 resumption, Kofoid promptly slid past Moles to take over the lead entering turn one. However, Moles immediately countered and defiantly returned the favor to repass Kofoid with a slide job of his own in turn three. As the two drag-raced off turn four, Moles lifted the front wheels and drifted into Kofoid’s line, with the two making slight contact at the start/finish line, while Moles punched the throttle to retain the lead getting into turn one.

A lap to regroup was all Kofoid needed as he gathered himself up and made a run at Moles once more. Shooting to the bottom of turn one, Kofoid slid to the top of two, with the right rear tire of Kofoid providing a slight nudge to the left front of Moles’ machine. Moles attempted a recovery mission to fire off a shot at Kofoid moments later in turn three, but wasn’t close enough, forcing him to fall into line behind Kofoid who assumed control nearing the midway point.

“I was probably playing it a little too safe early on,” Kofoid admitted. “I figured I might as well ‘cowboy up’ and started entering four (wheels) over (the cushion) entering three, and I made so much more speed to the center. I just basically drove it like a wing car, nice and straight, and started riding the brakes a bit more and that kept me even more settled. I feel like this came into my wheelhouse and into the KKM cars’ wheelhouse too. These cars are amazing in the rough when you can get it right.”

Kofoid subsequently opened a near straightaway lead over Moles, but soon met a throng of two-wide traffic that stifled his procession. As soon as Moles clawed his way back to within four car lengths of Kofoid on the 33rd circuit, the red flag was displayed for a double-flip between turns one and two involving Ethan Mitchell (13th) and Brenham Crouch (14th) getting upside down, while also involving Bryson, who stopped in the incident, but was able to refire with no harm done.

Checking out on the field was Kofoid who reconstructed his full-straight advantage over Moles following the restart, and when the race dipped under 10 laps to go. Yet, once again, traffic lurked ahead, forcing Kofoid to split through the middle between the likes of Taylor Reimer and Dominic Gorden to keep Moles at bay. That he did. Despite the cluster, Kofoid extended his lead ever more to 2.3 seconds and mounting until Australian Kaidon Brown (18th) slowed with a flat left rear tire which necessitated a caution and a restart once more.

Moles hung with Kofoid somewhat more successfully on the restart, but it wasn’t quite enough, as Kofoid expertly trekked the high side to collect the 10th victory of his USAC National Midget career, tying him for 71st all-time alongside Allen Heath, Doug Kalitta, Brad Kuhn, Steve Lotshaw, Jerry McClung and Chuck Weyant. It was also the 123rd victory for Keith Kunz as a USAC National Midget car owner, moving him to within 10 of Steve Lewis’ all-time leading 133.

Since an auspicious start at Port City back in 2020, Kofoid has repeatedly excelled at Port City, finishing second and first in each of his two experiences this weekend. It’s a venue that not only he’s taken a liking to after a “figuring out” process, but it’s a place that he and his team have worked together to achieve great things at, and they appear to have hit the sweet spot.

“I feel like we’ve come here enough times now and we’ve got our package right, at least more to my liking,” Kofoid explained. “This place is really finnicky. I don’t set the car up, but I’d bet as a crew chief, it’s pretty tough to get this place figured out. Then, I finally figured it out, and (crew chief) Jarrett (Martin) and I kept putting our heads together and it’s worked out.”

Mitchel Moles (Raisin City, Calif.) turned in the best performance of his USAC National Midget career on Saturday night at Port City. He collected $4,540 for his efforts after leading the opening 22 laps and finishing a career best second place in his first T-Town Midget Showdown run behind the wheel of the CB Industries/PristineAuction.com – K & C Drywall – NOS Energy Drink/Spike/Speedway Toyota. But, despite the banner result, Moles couldn’t help but be a little bummed out that it didn’t translate into a first career victory.

“It’s good for the guys, running second, and it’s good for points,” Moles said. “For my first time with USAC here, I feel like we did a good job. The track was definitely different from the last time I was here, and I feel like we adapted to it really well. We just got beat by Buddy; it’s just experience getting through the holes and stuff. He was just a little smarter about it; I didn’t really know where to go and I was just kind of cruising around until he went by me. We’ll get there one of these days, I promise.”

For the first time this season, Justin Grant (Ione, Calif.) wasn’t standing in USAC National Midget victory lane at the end of the night. However, after Saturday night at Port City, he remained the only driver to finish on the podium in all four features this season following a 3rd place result in his RMS Racing/NOS Energy Drink – EnviroFab – Response Management Services/Spike/Speedway Toyota and came out of the weekend retaining his series point lead.

“We came home third tonight and you can’t be disappointed with that,” Grant obliged. “We had to start a little bit deep because I didn’t get through my heat race, which started us 10th. We picked our way through pretty good, and, by the end, it got pretty tricky against the curb. I was having a hard time making any speed to capitalize on anything.”.