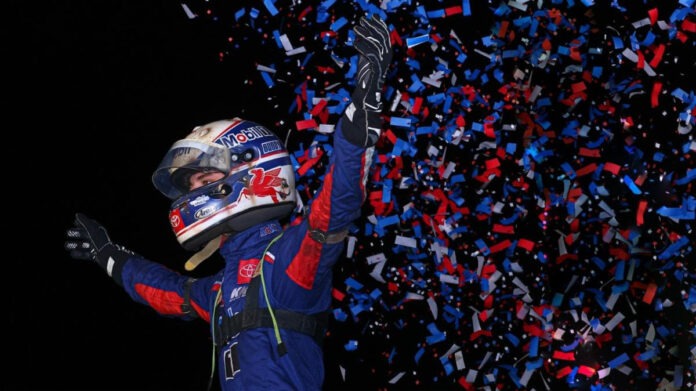 As it just so happened, it had been three seasons since the last instance of a USAC National Midget driver earning fast qualifying time, a heat race victory and a feature triumph all within a single evening.

Both events coincided on Thursday night at the 3/8-mile dirt oval as Buddy Kofoid became the first driver since Tyler Courtney at Ohio’s Eldora Speedway in 2019 to pull off a complete sweep in a series event.

The Penngrove, Calif. native spent little time dawdling in his original sixth-place starting spot at the beginning of the 30-lap feature, instead, thrashing his way to the race lead by the fourth lap and drilling home a second-straight USAC National Midget feature victory this season in his Keith Kunz-Curb-Agajanian Motorsports/Mobil 1 – Toyota – TRD/Bullet By Spike/Speedway Toyota.

The performance also elevated the defending series champion to the top of the point standings for the first time this year and provided team owner Kunz his 124th career victory as a USAC National Midget entrant, moving him to within nine of Steve Lewis’ all-time record of 133.

Just like his lone previous midget racing experience at Tri-City during the POWRi-sanctioned Gold Crown Midget Nationals in 2020, the spoils of victory belonged to Kofoid who ranked this score among the upper crust of accomplishments he’s had behind the wheel of a racecar.

Every time Kofoid touched the track, it was perfection. In his heat race, he charged from 6th to 1st and the win. Even with the ever-changing track surface changes throughout the night, Kofoid and the KKM crew had the number 67 on rails in an untouchable performance that resulted in a 5.802 second margin of victory that actually didn’t fully underscore how dominant he truly was.

“Our car is so good right now; I can go wherever I want,” Kofoid beamed. “I remember from two years ago that, out of turn two, the track could kind of get hairy and it would fall off. But I could make more speed and control my tire spin and just make the straightaway longer.”

While Kofoid rolled from the third row, midget racing newcomer and two-time USAC Midwest Thunder SpeeD2 Midget champion Jacob Denney led the field to the green from the pole position. However, the initial start was short lived as eighth-starting series Rookie Dominic Gorden got above the cushion in turn one on lap one, which sent him tumbling multiple times. He walked away from the incident but was finished competing for the evening.

Outside front row starter Zach Daum posed an early challenge to Denney on the back stretch during the opening lap before falling into line behind Denney. All the while, Kofoid was just starting to get wound up on the high side and hustled past Grant for fourth at the exit of turn two on lap two, then ably split between Cannon McIntosh and Daum in turn three on the following lap to move up another rung to 3rd.

Hauling the mail off the topside of turn two on lap four was the proverbial nail to the remaining 21 combatants as Kofoid zipped past both Daum and Denney to go from third to first in the matter of a back straightaway to put himself in the lead for good.

Slipping past the midway point, Kofoid remained uncontested with a two-second advantage as the point leader entering the evening, Justin Grant, poked into the front running fray as he turned a double-play of his own after picking off Kyle Larson to retake fourth, then went fourth to second in one fell swoop on lap 21 past both Daum and McIntosh.

By that point, it was no contest with Kofoid possessing a daunting half-lap lead of nearly eight seconds with just eight laps remaining, though traffic remained in his crosshairs. With the surface beginning to take on mega traction, Kofoid proved his adeptness at adaptation with less than 10 laps remaining.

“I figured that the rubber had to be coming,” Kofoid realized late in the event. “I moved down at the right time and figured that when I wasn’t gaining on the lappers, it was probably time to move down.  Luckily, there were only five or six laps left when I had to run down there.”

There, Kofoid saw his lead dwindle (barely) from eight to six seconds as seventh row starting Larson beat Grant to the bottom of turn three with three laps remaining to steal second right in the final scene. Up front, it was no contest as Kofoid finished off a “perfect game” and an unblemished night of racing with his second feature win of the year over Larson, Grant, Daum and McIntosh.

Larson (Elk Grove, Calif.) was the hardest charger in the feature, starting 13th and finishing 2nd in his CB Industries/PristineAuction.com – K & C Drywall/Spike/Speedway. In six career USAC National Midget starts at Tri-City, Larson has now finished inside the top-two on four of those occasions with two wins and two runner-up finishes.

**Dominic Gorden flipped on lap 1 of the feature.