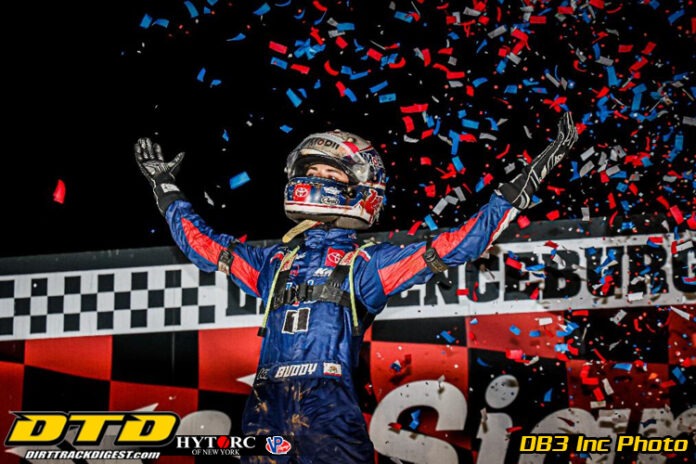 LAWRENCEBURG, IN – Despite Lawrenceburg Speedway being his own self-described “favorite racetrack,” Buddy Kofoid had felt the frustrations of finishing as the runner-up during the 3/8-mile dirt oval’s USAC Indiana Midget Week round in each of his two previous appearances in 2020 and 2021.

But this Saturday night was different. Kofoid exorcised the demons to break through for his first triumphant performance at the southeastern Indiana high banks in round two of the 18th annual edition of Indiana Midget Week.

Yet, of late, it seems as if every track is the Penngrove, California native’s favorite as he notched his fourth consecutive USAC NOS Energy Drink Midget National Championship feature victory, making him the first to accomplish the feat since Kyle Larson captured four-straight in a span that overlapped the end of the 2012 season and the start of 2013.

Now standing on the cusp of equaling Rich Vogler’s all-time record winning streak of five, set in 1978, Kofoid now has a shot at tying the mark on Sunday, June 5, at Tri-State Speedway in Haubstadt, Ind.

Kofoid’s reign of domination continued Saturday with his second Fatheadz Qualifying fast time award in the past three calendar nights, after it took him nearly two years to grab his first in November of 2021. Kofoid slashed his way to the second position on the opening lap from his sixth starting spot, then secured the lead by lap three after exchanging sliders with Justin Grant on the skyscraper steep banks twice a lap for two consecutive trips around the oval.

Entering as the odds-on favorite, Kofoid came, he saw, and he conquered at a venue he revealed that he’d someday like to promote a racing event at. But on Saturday night, Kofoid was on the side of cashing the checks instead of issuing them, which was all peachy keen with him. After all, it’s something he’s been doing an awful lot of lately, especially over the past three nights, all of which have resulted in Kofoid victories.

“It’s just so damn fun,” Kofoid said of Lawrenceburg Speedway. “This is probably one of the best Lawrenceburgs I’ve ever seen, up on the fence like that, cowboy up; it’s exactly how I like it, and what I came from in California. The first time I came here, I fell in love with it, and just kept chipping away. I ran sixth with the World of Outlaws, then fourth, then ran second with the midget and, finally, was one spot better tonight.

“I didn’t feel great after the heat race, and I was kind of nervous,” Kofoid continued. “It’s kind of tough to pass when it gets strung out but, finally, I got to the lead and was able to control the race.”

Just moments after Kofoid secured the race lead on lap three, the night’s wildest incident took place when Cannon McIntosh (8th) clipped the infield berm entering turn three, then slid up into the middle of the racetrack where his car promptly stalled and placed him in a precarious situation. McIntosh’s ride was clobbered first by Chase McDermand (14th), then Kaylee Bryson (16th), sending all three flipping upside down. McIntosh and McDermand’s machines received extensive damage that prevented them from restarting, while Bryson did return to finish 16th.

Grant fired an attempted slider at Kofoid for the lead in turn one on lap 11 but came up short, allowing Kofoid to shoot away once more with 1/3 of the race in the books until Hayden Reinbold (12th) flipped upside down on the back straightaway on lap 14.

Nearing midway, the star of the show suddenly became Jacob Denney, making just his fourth series start after capturing back-to-back USAC Midwest Thunder SpeeD2 Midget titles in 2020-21. He started 13th, but had dug his way on the bottom early, then surged all the way to 3rd behind Kofoid and Grant who were ripping the top and running 1-2 by the midway point of the 30-lapper.

Meanwhile, Kofoid had hustled on the fence to a half-straight advantage over Grant with nine laps remaining until 18th running Blake Brannon’s spin and stop in turn two on lap 22. Nonetheless, Kofoid picked up where he left off on the ensuing restart in order to reconstruct his advantage on the stretch run.

“I didn’t know I was going to get to the lead that quickly,” Kofoid admitted. “But once I got to open air, I figured I would run the wall all the way around, and then I hit it bad getting into turn three one time. I almost landed back at the trailer and figured I didn’t want to do that again. Last year, I was able to slide myself and actually make speed to stay even and almost catch the leader, so I figured if I could cut the corner short and get to the cushion really fast, that I could make speed. But it got dirtier and slower, and I decided to try it one time, and then hit it right, and I was able to keep tweaking my entry a little bit. Finally, I got it to where I could carry a ton of speed; that was a hell of a good time.”

Behind Kofoid, the battle raged on for second as Denney dipped under Grant for the runner-up position briefly with four laps remaining entering turn one. Grant saw and felt the pressure and slammed the proverbial door on Denney as he cut to the bottom to steal Denney’s preferred line away.

Ahead of them, however, Kofoid went unfettered, unchallenged and unflappable as he closed out his impressive performance with a 1.581 second score ahead of Grant and Bryant Wiedeman who snuck into third on the white flag lap past Denney to equal his best career series result. Denney finished a career-best fourth as did Jace Park in fifth.

Wiedeman’s sensational sophomore season put him into the top-10 for the seventh time in seven starts with the series this year aboard his Keith Kunz-Curb-Agajanian/Yerf Dog – Coleman Powersports/Bullet By Spike/Speedway Toyota. The Colby, Kan. native tied his best career series finish of 3rd, which he had set in November of 2021 at Placerville (Calif.) Speedway.