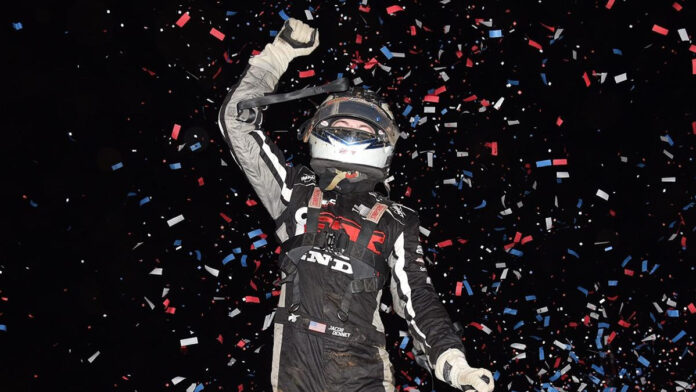 PUTNAMVILLE, IN – In what was a night full of firsts in USAC NOS Energy Drink Midget National Championship racing, Jacob Denney delivered his first career series victory on Thursday night during round four of USAC Indiana Midget Week at Putnamville’s Lincoln Park Speedway.

The 17-year-old Denney (Galloway, Ohio), making just his sixth career USAC National Midget start, had to do it by tracking down one of the all-time greats in USAC Triple Crown champion Jerry Coons Jr., getting by for the top spot when he snuck by Coons on the bottom of turn four with 11 laps remaining.

All throughout Indiana Midget Week, Denney has continuously turned heads with consistently impressive runs, including a 6th, 8th and 4th within the past seven nights. At Lincoln Park, Denney’s sudden emergence hit a crescendo as he became the first first-time victor of the USAC National Midget season.

“I knew we had the car to do it,” Denney explained. “I just had to put a whole night together; I either do good in qualifying, am good in the heat, then struggle in the feature, or it’s completely the opposite. I can’t thank Jay Mounce and Gavin Stout enough for giving me the opportunity to run this car. This is what I want to do my whole life and, hopefully, I get to.”

This wasn’t even Denney’s first foray into Lincoln Park’s victory lane during his rapid ascent earlier in his racing career. He captured a USAC Midwest Thunder SpeeD2 Midget win at the 5/16-mile dirt oval in July of 2020. He thought just maybe, this could become the locale that would serve as the setting for his first career USAC National Midget win.

“I had a feeling, and I was praying and hoping it would,” Denney admitted. “(The track) was actually kind of the same it was that night. It worked to my favor, and we got it done. This is better than any of my first wins in anything before.”

Denney rolled off for the 30-lap main event from the pole position, but the storyline that was buzzing all over the racing landscape came earlier in the night when the top-four fastest times during Fatheadz Eyewear Qualifying were turned in by four women: fast-time Jade Avedisian (Clovis, Calif.), Kaylee Bryson (Muskogee, Okla.), Taylor Reimer (Bixby, Okla.) and Mariah Ede (Fresno, Calif.).

The unprecedented achievement was monumental, and all four women lined up in the front half of the feature starting field after transferring to the feature through their preliminary events. However, all looked ahead early on as Coons shot out to the lead from his outside front row starting position.

However, trouble ensued a mere half lap later when Mariah Ede (12th) nearly flipped in turn three. As Ede’s car was rotating like a whirling dervish, Thomas Meseraull (18th) collided with her, which straightened Ede’s car out and allowed her to drive away, while Meseraull slid sideways to a stop.

The complete restart found practically the same result as Coons rushed around the outside of Denney to nip him by a wheel at the stripe upon the completion of lap one and held serve until the third circuit when Jade Avedisian (7th) clipped the turn four infield tire and spun, nearly collecting Taylor Reimer (9th) in the process as Reimer ramped over Avedisian’s left front wheel but kept going. Chase McDermand (10th) was left with nowhere to go and became ensnarled in the aftermath, plowing into the left side of Avedisian’s car and stopping as well. Both Avedisian and McDermand were finished for the evening.

Over the course of the next several laps, Coons distanced himself from Denney and the rest of the field, climbing to nearly a half-straightaway advantage. Slowly but surely, as the laps ticked away and lapped traffic became more nearer than farther, Denney had closed the gap between he and Coons to zilch as he quickly found himself right on Coons’ rear bumper.

On the 20th lap, Denney pulled both of his front wheels even with Coons at the entry to turn three, preventing Coons from securing the bottom line. As the pair rolled through turn four side-by-side, Denney had the low line locked down with Coons a groove higher. Denney used the drive off the bottom to propel himself past Coons and into the lead for the first time in his young career with the USAC National Midgets.

Negotiating gobs of traffic down the stretch, Denney was forced to move up a lane to overtake the backmarkers just as Coons was drawing back nearer to Denney ever so slightly. As Coons became stymied behind the cars of Mariah Ede and Jace Park late, Zach Daum slipped by Coons for the second position on lap 27 and remained there for the final four-lap distance.

Also remaining in place for the rest of the distance was Denney up front who led the final 11 laps to secure his first series checkered flag by 0.301 seconds over a hard-charging Daum who was just three car lengths back at the finish line. Coons took third while Brenham Crouch (Lubbock, Texas) earned a fourth place finish and Mitchel Moles (Raisin City, Calif.) rounded out the top-five with yet another solid showing.

With his runner-up result, Daum (Pocahontas, Ill.) earned his best USAC National Midget finish since October of 2016 at Tri-City Speedway in Granite City, Ill. He also scored the best ever finish for a Honda powerplant with the USAC National Midgets as he took second in his Bundy Built Motorsports/5d Speed Shop – Diesel Exhaust Services/Spike/Bundy Built-PME Honda.

“We just tightened up too much and we ran second,” Daum said matter of factly. “We got better and better as the race went on, but second is all we could do.”

“I just kind of started falling off there,” Coons explained. “I think we were too good early, and I was trying to make some shock adjustments, but I just couldn’t keep the car down where I needed to. I changed lanes and I kept hooking a rut. This is a new car this year and we’ve made some changes. All night, it felt better than the car did last year.”

Meanwhile, Coons delivered high praise to Denney whom he observed closely as he practically grew up in a racecar. Coons served as the series director for USAC’s .25 Midget division and Denney was among the frequent frontrunners of the series during Coons’ tenure. Denney collected USAC .25 titles in 2018 for Light 160 and Light World Formula and twice more during 2019 in the Unrestricted Animal Pavement and Heavy World Formula Pavement divisions.

“I’ve known this kid through quarter midgets,” Coons recalled. “I posted on social media that if I had a team with enough money, he’d be in the driver’s seat. I can’t say enough about that kid. He’s very talented and doesn’t come from any money. They work hard for it, and he deserves this win.”

On top of all the accolades going around on Thursday night, Kaylee Bryson became the new all-time leader in feature starts by a woman with the USAC National Midgets. Her 54th career series start surpassed Holly Shelton for the number one spot as Bryson went on to finish in the 10th position.