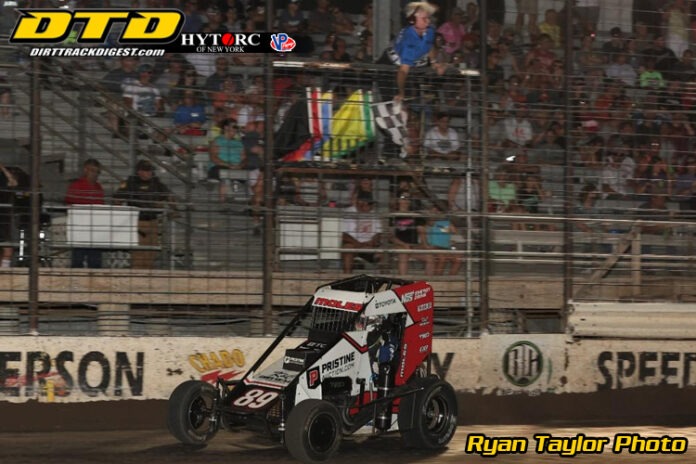 FAIRBURY, NE – Mitchel Moles has made the month of July the month of breakthroughs for himself in USAC competition.

The series’ leading Rookie of the Year contender traveled in rapid-fire succession from third to second to first between laps five, six and seven, then controlled the final 24 laps to collect his first career series win in his CB Industries/PristineAuction.com – K & C Drywall – NOS Energy Drink/Spike/Speedway Toyota.

At times, Moles had felt kind of snakebitten, coming “oh-so-close” on several occasions throughout his first 21 feature starts. But number 22 was a catch, and the 22-year-old made sure to not let it escape his grasp in his first ever visit to the 1/5-mile dirt oval.

Moles led more feature laps than any other driver at South Dakota’s Huset’s Speedway last weekend in both the midgets and sprint cars before wall contact pulled the rug out from underneath him. It was the advice from a fellow competitor, one who just won the most recent USAC Midget feature two nights prior, that signaled a turning point in Moles’ season and has ultimately led him to winning in both divisions within a week span.

“Thomas Meseraull told me just as I was climbing into the sprint car last week, “Hey bud, when the racetrack slows down, so does everybody else. You don’t have to run so hard,” Moles recalled. “I kind of took that into consideration there and actually slowed down a little bit. I felt like we got a lot faster there toward the end, and I was glad to finally put one away.”

Friday night’s win also put one on the board for CB Industries, who finally got to celebrate their first win of the season. Team owner Chad Boat is familiar with the sight and the site, having won the series debut at Jefferson County back in 2016 on a similarly oven-baked, sweat-drenched afternoon and evening.

“It feels like it’s 116 degrees outside,” Moles estimated, which wasn’t much of an exaggeration. “These guys are working their tails off whether we’re good or we’re bad. They gave me a damn good racecar tonight, and I had to finish that one off for them.”

With Friday night’s score, Moles became just the second driver to win both his first USAC National Sprint Car feature and USAC National Midget feature within the span of a single week, joining Jeff Gordon who did the deed in May of 1989.

Moles started from the outside of the front row for the 30-lap main event but wasn’t quite able to find his footing during the first several laps while pole sitter Justin Grant flashed away to the lead and inside second row starter Ryan Timms joined in the fray by motoring to second on the opening lap.

Timms carried the torch on the bottom and came within a whisker of the lead at the stripe at the conclusion of lap two, and his stick-to-it-iveness paid off a lap later as he overtook Grant on the inside of turns three and four to assume the number one position.

Once Moles dropped to third, he recalibrated and began to surge forward, first taking Grant as he eked by on the outside for second on lap six. A half-lap later, 22nd running J.R. Ewing became sideways at the exit of turn four, which got Timms all crossed up and on the binders to avoid contact and subsequent catastrophe, which allowed Moles to jet around the outside of Timms to the tune of a half car length at the line.

As the laps wound down to under 10 to go, the storyline became the navigation of lapped traffic for race leader Moles all while Timms had chopped the interval between he and Moles to a mere morsel as he closed right to the leader’s tail tank with nine laps remaining.

On lap 22, Timms made a bid to return to the lead, diving underneath Moles in turn one, but closed up on the lapped car of Ewing once more, nearly resulting in contact. As Timms whoa’d himself up and pulled back on the reins, in the blink of an eye, his shot at winning had all but dissipated when he dropped to a full 1.5 second behind.

The non-stop, caution-free feature ceased to exist on lap 26 when 15th running Nebraska native Trey Gropp slowed to a stop in turn four. On the ensuing restart, Meseraull’s ride stalled on the back straightaway, relegating the ninth-place driver back to 16th place result in the final rundown.

That aborted restart soon proved to be the nail for Timms’ opportunity as officiating ruled Timms to be out of line when the field took the green flag, necessitating the repositioning of Timms from second to third in the order, moving his Keith Kunz/Curb-Agajanian Motorsports teammate Buddy Kofoid in front of him to second.

Timms retaliated by sliding Kofoid in turn two with four laps to go to take the second position back for his possession, then ringed the top when Kofoid attempted to return fire with a slider in turn three moments later, with Kofoid coming up short, and falling into line in third just as Grant reemerged in the fray for the podium.

As the pair battled side-by-side down the back straight, Jerry Coons Jr. dove to the bottom and briefly made it three-wide for the position before securing the third spot by algae-eating the bottom ahead of the slider throwing contest between Kofoid and Grant.

Up front, Moles went unchallenged from the final restart onward, completing his first trip to victory lane with the series by a 0.793 second margin over Timms, Coons and Kofoid while Cannon McIntosh made a late-race beeline to complete the top-five after starting back in 16th.

In Ryan Timms’ first 18 career USAC National Midget starts between 2021 and 2022, the Oklahoma City, Okla. native had finished inside the top-five just once. Now, in his past three starts, all coming this week, he notched a first on Tuesday, a third on Wednesday and a second tonight for his third-straight podium finish with the series in his Keith Kunz-Curb-Agajanian Motorsports/iBuyPower – TRD – Toyota/Bullet By Spike/Speedway Toyota.

“(If I had to change one thing) I’d say I wouldn’t have gotten out of line and screwed myself out of a win,” said Timms, who led four laps early. “We definitely had a car to win but it was kind of tricky there at the start. I got out to the lead pretty early and I expected someone to come around me eventually. I went for a slider a few times thinking that the lapped cars ahead of me on the bottom were far enough ahead, but they weren’t.”

“With five to go on a restart like that, I knew slide job city was coming up there in front of me, so I just kind of parked it on the bottom,” Coons explained. “I had a left rear tire leaking which was getting really flat. I didn’t know how it was going to drive off the top there, so that was one reason I went to the bottom. I knew on restarts like that, everybody starts sliding each other up there, so I went to the bottom and committed for the last five laps. If it had been 15 to go, I probably wouldn’t have done that, but you’ve got to do what you’ve got to do.”