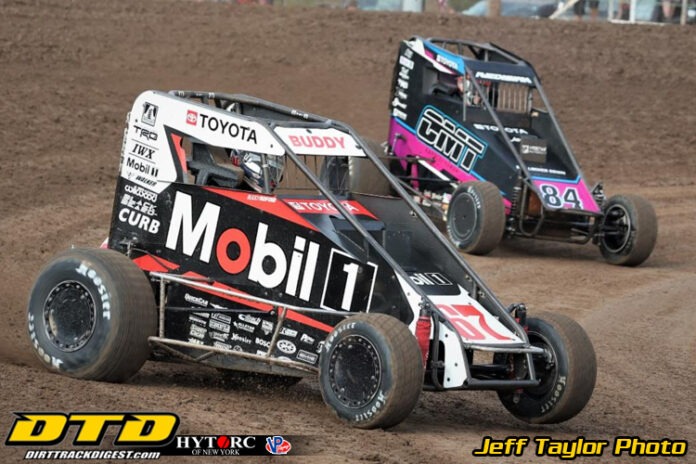 FAIRBURY, NE – Amid a season in which a lot has gone right for Buddy Kofoid, a little bit of extra good fortune is something the Penngrove, Calif. native will gladly embrace when the situation calls for it.

After a rare stumble over the turn two cushion at the midway point, a red flag for an incident on the other side of the 1/5-mile dirt oval gave Kofoid his fourth spot back. And on the first try at a final lap, a spinning car just before the checkered flag was thrown granted Kofoid a stay of execution.

After the multiple fortuitous pardons, Kofoid ran third on the final lap of Saturday night’s Riverside Chevrolet Midwest Midget Championship presented by Westin Packaged Meats & Schmidt’s Sanitation at Fairbury, Nebraska’s Jefferson County Speedway. At that moment, the top-two of Ryan Timms and Cannon McIntosh collided with each other, sending both sliding over the turn two banking and out of contention.

Kofoid rushed underneath both Timms and McIntosh, then beat the bottom-rolling Jerry Coons Jr. to the line by a single car length for his seventh feature victory of the USAC NOS Energy Drink Midget National Championship in his Keith Kunz-Curb-Agajanian Motorsports/Mobil 1 – Toyota – TRD/Bullet By Spike/Speedway Toyota.

The $10,000 reward for Kofoid came after he led one lap and one lap only, the 41st of the scheduled 40-lap distance, which was extended into overtime due to a caution on the final lap that initiated a green-white-checkered restart scenario.

Kofoid’s seventh win of 2022 has already surpassed his output from his 2021 title season when he achieved six feature victories. It was the 16th triumph of the current championship point leader’s career with the series, tying him with Rico Abreu, George Amick, Billy Cantrell, Lee Kunzman, Bobby Olivero and Henry Pens for 42nd all-time.

In turn, Kofoid notched another tally in the win column for car owner Keith Kunz, who earned his 130th victory as an entrant with the USAC National Midgets, elevating him to within three of the all-time record held by Steve Lewis at 133.

Kofoid chalks up his come-from-behind victory to a bit of last lap intuition as the two drivers he’d sought a path to get by suddenly vanished and opened a clear path to one of the most major wins of his midget career thus far, concluding a busy stretch of seven midget races over nine nights in the same manner in which he started the road trip – as a winner.

“I haven’t been racing that long, but I feel like I’ve raced long enough to where I can almost see how a situation is going to play out and I can snooker them a little bit,” Kofoid explained. “I feel like that’s kind of what happened. I got a little bit lucky, but our car was just good enough to put them away and stay out front for that last lap. I’m glad to finally get the 10-grand win at one of my favorite tracks.”

Kofoid started his journey from the fourth spot while pole sitter Justin Grant stepped out to lead the initial laps for the second night in a row. Timms, however, was the one who caught the eye of the observers as the biggest mover early on as he charged from sixth to second in the opening five laps, first seeing him make a magnificent split between Jerry Coons Jr. and Zach Daum for third in turn one on lap three, then by McIntosh for second with a slide and dive in turn three.

That instigated a race-long feud between the two Oklahomans of Timms and McIntosh, with the pair trading barbs literally twice a lap for three-laps straight until Timms finally cleared him on lap nine, then took his run at Grant, who he dipped under in the third turn, then emerged on the other side of turn four as the new race leader on the 10th circuit with McIntosh following suit to second two laps later.

Meanwhile, Friday night’s feature winner Mitchel Moles found an enemy in turns three and four of the racetrack throughout the entirety of Saturday. During his heat race, the leading series Rookie of the Year contender flipped over the banking, necessitating a move to a CB Industries backup car.

After traveling tenth to first during the semi-feature, Moles was running ninth on lap 17 of the feature when he got over the turn four ledge and bounced his right rear wheel off the outside wall, ricocheting him into the path of Bryant Wiedeman. The two collided with brute force, but both managed to keep going. Three laps later, Moles wasn’t as lucky as he pancaked the turn four wall in practically the same spot. This time, the contact was much harder and the result much crueler, as it sent him tumbling over twice to bring out the red flag. Moles was okay, but his tumultuous night had come to an end after two cars and two flips.

At the same exact moment as Moles’ incident, fourth-running Kofoid had slipped over the banking on the back straightaway and was in the process of being freight-rained by much of the field, which would’ve spelled doom and disaster as he fell out of the top-ten. However, Moles’ incident brought out the red and provided Kofoid a reprieve that put him back into fourth for the restart since scoring reverted to the last completed lap.

Between laps 21 and 23, McIntosh routinely checked out, but each time, Timms tracked down McIntosh just in the nick of time to nip his heels at the start/finish line. Finally, on lap 24, McIntosh cleared Timms as he velcroed his grip to the topside and beat Timms to the stripe. The moment turned out to be short-lived, though, as Timms yoinked the lead back into his possession on lap 29.

From that point onward, Timms clasped onto a six-tenths of a second advantage over McIntosh and was well on his way to a lucrative victory until the proverbial red carpet that led to victory lane was ripped out right from beneath Timms’ wheels. However, the 20th running car of Corey Joyner spun sideways to a stop in the middle of turn four right in front of the leaders as they were sliding through turn three. That incident reset the deck and set up a green-white-checkered finish.

McIntosh used the second-wind to swipe the lead from Timms in turns one and two on the lap 40 restart. Timms ripped it back with an identical maneuver in turns three and four, but McIntosh crossed over and drove by Timms to lead by a car length at the line.

Entering turn one on lap 41, Kofoid entered the fight and was fully alongside Timms and McIntosh in turn two as the trio went three-wide for the lead. Timms drifted up the racetrack, however, and his rear bumper and McIntosh’s front bumper met chrome-to-chrome, sending the two over the cliff while Kofoid scooted off scot-free. He took possession of the top in three and four while a rapidly-closing Coons gave chase on the bottom with 0.218 sec. ultimately deciding the difference at the line with Kofoid the late-race hero, Coons second, Daum third, Jade Avedisian fourth and Jacob Denney rounding out the top-five.

“I wouldn’t say I saw it coming, but I knew that Cannon was going to throw a slider on him,” Kofoid explained. “Obviously, with the rubber, there’s only one good lane to be, so with two laps left, you’ve got nothing to lose. I knew Ryan was going to throw something, so I tried to stick the bottom later and slide up all the way in front of them. I wasn’t sure what to do going into turn three coming to the checkered. I knew I had to run the top because it would give me lane choice and the momentum to turn down if I need to. Luckily, I didn’t have to fight with any of them coming to the checkered.”

Jerry Coons Jr.’s runner-up finish was his best USAC National Midget feature result in nine years, since 2013 at Illinois’ Belle-Clair Speedway. The 2006 and 2007 series champion came a car length short of completing a Coons sweep of the evening at Jefferson County. His son, Cale, won the accompanying micro sprint feature. It was Jerry’s second podium finish in as many nights after taking third 24 hours earlier in his Central Motorsports/Schmidt’s Inc. – Gateway Paintball – Paintball Dave/Spike/Stanton SR-11x.

“My plan was to roll the bottom and let them take themselves out on the top and that’s what happened,” Coons said of his plan. “It’s frustrating to be that close because we were pretty close, but at the same time, that deal gained us a lot of spots so I can’t be disappointed.”

Zach Daum (Pocahontas, Ill.) put it on the podium for the second time this season in his Bundy Built Motorsports/5d Speed Shop – Diesel Exhaust Services/Spike/Bundy Built-PME Honda, which made it a podium finish involving three different engine manufactures with Kofoid (Toyota) followed by Coons (Stanton) and Daum (Honda) occupying the top-three positions.

“I knew on the last lap, somebody was going to end up crashed somehow,” Daum admitted. “I didn’t know who was going to do it to who, but I knew it was going to be ugly, so I just tried to roll the bottom there. Our motor was blowing up or something was going on; it sounded like a tractor, but not a good tractor. I don’t know what happened yet, but we’ll figure it out. Our only bet was to roll the bottom and try to keep our nose clean. I thought I was better than Jerry at times, but he was better than me at times. It was a little bit of give and take there, but, luckily, we ended up on the right side of it.