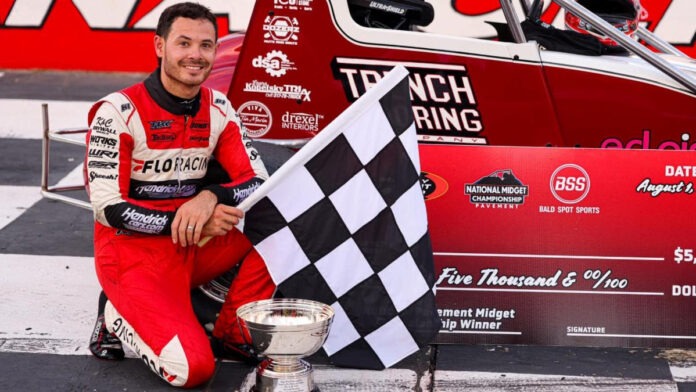 BROWNSBURG, IN – Quite simply, you can’t keep Kyle Larson down.

That’s been evident throughout his entire racing career, and also was on full display during his first pavement midget start in nearly a decade during Monday’s USAC Midget Special Event at Lucas Oil Indianapolis Raceway Park.

Larson was penalized following the first two attempts to begin the 30-lap feature when race officials deemed that he was a tad too quick on the trigger and jumped the start.

The fourth try proved to be the charm for the reigning NASCAR Cup Series champion from Elk Grove, Calif. as he raced his way from fifth to third on the first scored lap.

In short order, Larson chased down second-running Kody Swanson for second off the bottom of turn four at the end of lap two, then scurried under leader Todd Bertrand at the exit of the second turn on lap three to grab the lead, a position he never relinquished in his Jerome Rodela/Rodela Fabrication – Trench Shoring Company/Gerhardt/Ed Pink Toyota.

Larson’s first pavement midget appearance in nine years proved fruitful as he earned his second career IRP midget victory, winning for the first time in 11 years, nearly to the day, back in 2011.

“This is such a beautiful racecar,” Larson praised. “It’s kind of a dream to get to be able to run it. I’ve always seen this car, and everything that Jerome works on is just beautiful. We were really fast, and I hope to get to do it again someday.”

Once gaining the lead, Larson pulled away to a substantial half-straightaway advantage in just the first five laps, which translated to a full two second lead and did it all while racing his own race.

“I went back to fifth and I knew my car was really good from the start,” Larson explained. “I just wanted to get to the lead and set my own pace. Every time we hit the track today, I got looser and looser. Jerome made a lot of adjustments to tighten me up and I felt really good to fire off. I actually got tight there towards the end, and for the last half, I was really tight.”

However, once Santos cleared Bertrand for the second position on lap six, the May IRP midget winner began making major headway in his full-on pursuit of Larson.

Just as soon as Santos worked his way into play as a challenger to Larson, it all came to an abrupt end as he dropped off the pace dramatically before pulling into the infield on lap 17. From there, Larson expanded his lead to an increasingly insurmountable 5.561 seconds, never to be headed again.

“I ran hard the whole time,” Larson said. “I had no idea where second was behind me. I saw that Kyle (O’Gara) got to second and I didn’t know if he was running me down or what. I just tried to run hard the whole time but also wanted to conserve our right front tire and get the win.”

Chuck Gurney Jr. (Livermore, Calif.) set the night’s quickest time in qualifying. His most recent fast qualifying performance at IRP came when he timed in as the best overall during the 2010 Night Before the 500.