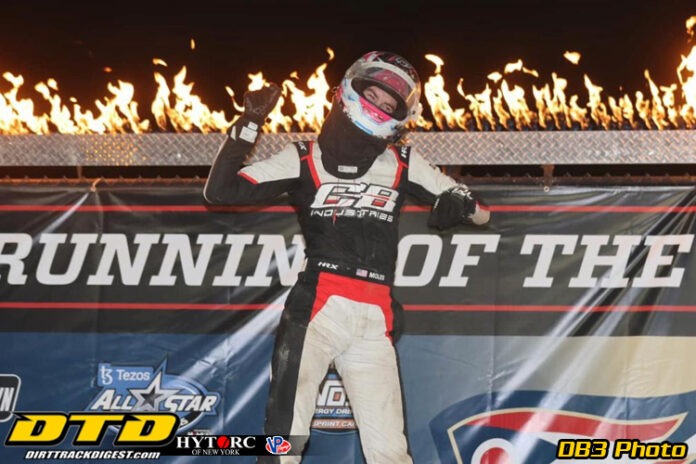 ROSSBURG, OH – Prior to Friday night, Mitchel Moles had never before laid eyes on Eldora Speedway.

At the end of Friday night’s USAC NOS Energy Drink Midget National Championship feature, he was standing in victory lane as a first-time winner at the Rossburg, Ohio half-mile dirt oval.

The Raisin City, Calif. native claimed he played the game somewhat cautiously, but he disguised any sense of trepidation well by setting fast time to begin the night, then raced from his sixth starting position to the front of the field in the 25-lap main event.

But mainly, he wanted to be there in contention at the conclusion. When racelong leader Cannon McIntosh ran into trouble just after the midway point, Moles stayed true to his word and capitalized amid misfortune to capture his second career series feature victory in his CB Industries/PristineAuction.com – K & C Drywall – NOS Energy Drink/Spike/Speedway Toyota.

As it turned out, lightning struck twice as, for the second consecutive year, the Friday night midget feature at Eldora went to car number 89 out of the CBI stable. Last year, it was Chris Windom. This time, it was the series’ leading Rookie of the Year contender who came, saw and conquered all in a day’s work.

“When you come in like that and you’ve never seen any prior conditions and you’ve never seen it any other way, you just race the racetrack with the dirt that’s there and just try to make speed however you can,” Moles explained. “These guys at CB Industries gave me a hell of a car tonight. We’ve been struggling the last couple of weeks and really needed this one to kick us in the ass and get us going again.”

He sure wasn’t kidding with that quip. In his last five series starts, Moles had garnered 21st, 23rd, 12th, 13th and 12th place finishes. His most recent result better than 12th just so happened to be his victory in mid-July at Nebraska’s Jefferson County Speedway.

Moles charged his way into the second spot by lap four after starting on the outside of row three. Up front, it was all McIntosh’s show as the outside front row starter scurried into the lead on the opening lap and steadily stretched his lead out to the tune of 2.254 seconds throughout the first 10 laps.

With the race seemingly resting comfortably in his hands, the unthinkable occurred on lap 14 as McIntosh caught the turn one wall with his right rear tire and helicoptered down the banking before flipping over on his side, ending his night. Fortunately, he was able to walk away.

McIntosh’s misfortune presented a golden opportunity, right on a silver platter, for Moles who slotted into the race lead in the latter half of the contest.

“We were pretty even,” Moles said in comparison to he and McIntosh’s prowess on this night. “He started on the front row and got a pretty good gap on me. It took me a minute to get through the cars, but it would’ve been a race there at the end. He was pretty good, so I can’t really say how it was going to end up. I just wanted to play it conservatively and be there in case it happened. That’s what we did and, man, we got it done.”

A flurry of activity was unending behind Moles down the stretch as a surging Alex Bright doubled up on the lap 14 restart by traveling from fifth to third in a turn three dive under both Logan Seavey and Buddy Kofoid. Kofoid, nonetheless, fought back to battle Bright as the two waged a side-by-side joust lap-after-lap.

All the while, Moles had extended his lead to two full seconds as Kofoid cleared Bright with an outside turn four pass on lap 19 for the third spot and, following a brief caution period for the stopped car of eighth running Jacob Denney on lap 22, Kofoid slid Wiedeman for second on the lap 23 restart before Wiedeman took it back with a crossover on the final corner to defeat Kofoid by a half car length at the stripe.

Ahead of them, though, the story was all Moles who became the first driver since Kyle Larson in 2011 to win during his first career Eldora USAC National Midget start.

Moles finished his winning performance by a 1.107 second margin over Wiedeman in second and Kofoid in third. Chris Windom was the hardest charger, having advanced 10 positions to finish fourth after starting 14th. Bright rounded out the top-five with his best career Eldora performance in what was his first start at the track since 2018.

Series point leader Kofoid (Penngrove, Calif.) turned in his best career Eldora finish as well, making it eight top-five finishes in his past nine series starts aboard his Keith Kunz-Curb-Agajanian Motorsports/Mobil 1 – Toyota – TRD/Bullet By Spike/Speedway Toyota. As a result, Kofoid extended his points advantage to 183 as he pursues a second consecutive series driving championship.

**Cannon McIntosh flipped on lap 14 of the feature.