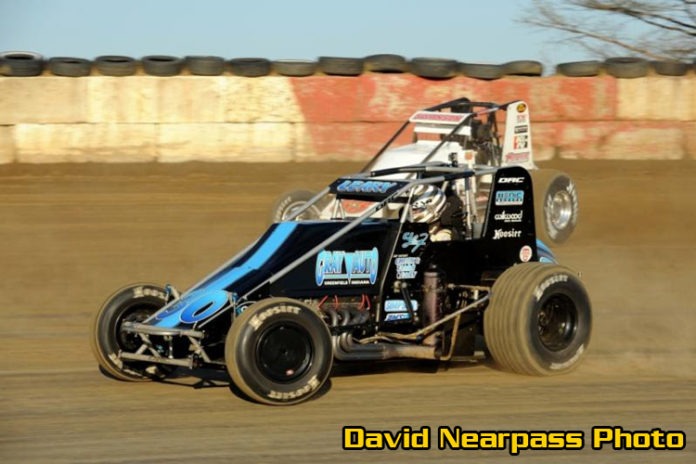 In May of 1997, back when C.J. Leary was just a year old, the Leary family reached USAC Silver Crown victory lane for the first time.

Chuck Leary, C.J.’s father, scored a prestigious win in the “Hoosier Hundred” at the Indiana State Fairgrounds for his first and only career USAC National triumph. It may have just been a single victory, but oh, what a victory it was in the most-storied race on the series’ calendar.

Zip forward nearly two decades later and the setting is slightly different, just a tad less than an hour and a half drive to the west from the Indy Mile to the Terre Haute Action Track where the Leary Construction No. 30 once again raced its way into the record books, this time with C.J., as he joined his dad as the first father/son duo to capture USAC Silver Crown series wins in their careers.

Not only was it meaningful to C.J. to become a USAC winner, he accomplished the feat with his dad as his spotter, making it an extra-special Sunday afternoon for the Leary family.


“Winning the ‘Sumar Classic’ is a huge accomplishment, especially for me being only 20-years-old and how hard 100-lap races are to win,” Leary admitted. “Guys race their whole careers and may never win a Silver Crown event. It was definitely a special moment for my dad and I at Terre Haute last year. He spotted for me the whole race and kept me informed on where the rubber was on the track and kept me focused. We’ve come a long way as a father/son team. Not only is he my father, he’s my best friend and it’s really cool to be the first father/son to win a Silver Crown event.”

Chuck himself made 37 Silver Crown starts in his career, along with 1995 series Rookie of the Year honors. C.J. took his father’s experienced advice to heart and conserved early on as he kept pace with Justin Grant after starting outside the front row. The sunbaked surface provided a tricky set of circumstances for C.J., who was accustomed to running under the lights on the half-mile.

“All day, my car was extremely fast and I knew we were going to be competing for the win,” Leary recalls. “Once we took the green flag, I just kept pace with Grant and I tried to be as easy on my tires as I could without losing much time to him. On the radio, my dad kept me from overdriving the car too early in the race. We had the yellow (flag) with 11 laps to go and, prior to the yellow, (Brady) Bacon and I battled for second. Bacon really helped me find the fastest line on the track. Once we went back green, Grant went straight back to the top and I went for the rubber. Once he missed the rubber, we were in the clear. The rubber on the track was just so much faster and I had already run down there and made adjustments to my shocks for the rubber. My dad kept telling me to hit my marks and stay in the rubber; Grant couldn’t get past us.”

It was quite a breakthrough performance for the Greenfield, Indiana driver who, one year earlier, had finished a close second to Shane Cockrum in the 2015 “Sumar Classic.” Terre Haute has been one of those tracks that seems to be hit or miss for C.J., but in the Silver Crown car, it appears as if he and his crew have the place figured out.

“I don’t know what it is, but our DRC Chassis just works really well on the half miles,” Leary feels. “I feel like I do a really good job at conserving the racecar until the timing is right, then we make our move to the front. I’d say Terre Haute is one of my toughest tracks in the sprint car, but I make it look like my best track in the Silver Crown car.”

There would be an encore performance in August of 2016 when C.J. captured his first career USAC AMSOIL National Sprint Car victory at Indiana’s Kokomo Speedway, surpassing the hurdle that had stood in his way during his first five seasons. Now, C.J. has sights set on new heights and capturing those accomplishments that have eluded him thus far. Now just 20 years of age, future victory lane scenes could see a lot of C.J. Leary in them, especially a certain victory lane that would mean the world to he and his father.

“Last year had a lot of ups and downs for me,” Leary acknowledged. “I drove for three different teams and had success with each of them, but I’m excited this season to be back in the family-owned No. 30 with new 1 Way Technologies power plants and Jeff Walker on the wrenches. We’re obviously looking for a championship in the sprint car series and wins. I’d love to win back-to-back ‘Sumar Classics,’ but there isn’t a race I want to win more on the schedule than the ‘Hoosier Hundred.’ It would be the 20-year anniversary of my dad winning it back in 1997.”

Thirty-four drivers and cars have already been entered for the 17th running of the “Sumar Classic” at the Terre Haute Action Track on Sunday, April 2, including former race winners Kody Swanson (2014), Shane Cockrum (2015) and defending winner C.J. Leary as well as Silver Crown champs Jerry Coons, Jr. (2008) and Chris Windom (2016).

Pit gates open at 1pm while the grandstands open at 3pm. Silver Crown hot laps begin at 3:30pm with Silver Crown qualifying pushing off at 4:40pm. Racing begins at 5:15pm.

Tickets for the “Sumar Classic” can be purchased now at http://www.usactickets.com/. Adult infield tickets start at just $15 while children age 10 and under are FREE! Adult grandstand tickets are $25. Fans will receive a free pit pass upgrade with an advanced general admission ticket purchase, which is good for passive pit entry after 3pm only. Pit Passes are $30 for USAC/UMP Members and $35 for non-members.

For fans who are unable to make the trip in-person, the “Sumar Classic” will be streamed live on http://www.SpeedShiftTV.com/.

Meanwhile, the 63rd “Hoosier Hundred” is just around the corner and will take place on Thursday, May 25 at the Indiana State Fairgrounds in Indianapolis. The event is part of the “Week of Indy,” which features three-straight nights of USAC racing leading up to the 101st running of the Indianapolis 500: the “Tony Hulman Classic” featuring the USAC AMSOIL Sprint Car National Championship on Wednesday, May 24, the “Hoosier Hundred” on Thursday, May 25 and the “Carb Night Classic” at Lucas Oil Raceway in Brownsburg, Ind. for the USAC Silver Crown Championship on Friday, May 26. An advanced, discount “Superticket” for these three events can be purchased now at https://usacracing.ticketspice.com/2017-week-of-indy.