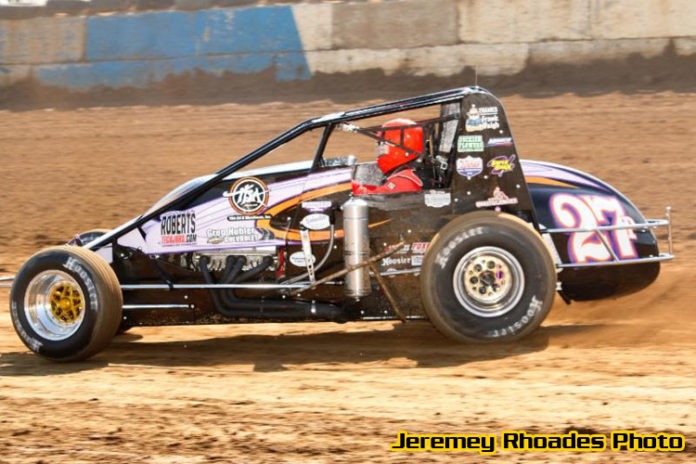 A trio of USAC’s most popular stars are the latest to file their entries for this Sunday’s “Sumar Classic” USAC Silver Crown season opener at western Indiana’s Terre Haute Action Track.

The addition of Dave Darland, Justin Grant and Tyler Courtney to the April 2nd race brings the field to 35 entries in what is expected to be the largest field for the event in nearly two decades.

Lincoln, Indiana’s Darland, a 2008 “Sumar Classic” winner, will join the field for his first ride in the Phillips Motorsports No. 27. Darland has had substantial success with the Phillips’ sprint car in recent years, racking up 17 wins with the team between 2013 and 2015. Darland is one of just six members of the USAC Triple Crown club in which a driver has won the title in each of the club’s three national divisions during their career: Silver Crown, AMSOIL National Sprint and National Midget. Darland is tied for sixth on the all-time Silver Crown win list with 14 victories.

Justin Grant nearly won the “Sumar Classic” one year ago after leading the first 93 circuits of the 100-lap event, ultimately finishing second behind C.J. Leary. The Ione, California native seeks redemption on Sunday as he aims to notch his first career series win. Grant has gotten off to an incredible start thus far in the 2017 season after collecting season-opening wins in USAC’s National Sprint (Ocala, Fla.) and National Midget divisions (Du Quoin, Ill.), the first driver ever to accomplish the feat. Grant’s Silver Crown team sports a new look, taking the No. 91 this season as car owners Chris Carli and Ron Hemelgarn have teamed up with Grant for a run at the series title.

Indianapolis, Indiana’s Tyler Courtney takes the wheel of Hans Lein’s No. 97 for Sunday’s “Sumar.” Courtney has made just a handful of starts in the Silver Crown division, but his most recent run in a champ car at last fall’s “4-Crown Nationals” at Eldora Speedway resulted in a career-best third-place finish after qualifying for the pole position. Courtney was also a winner in the AMSOIL National Sprint Car series in 2016 after storming to the front from the 24th spot to capture his first career USAC National win during “Indiana Sprint Week” at Gas City I-69 Speedway.


Thirty-five drivers and cars are on the list of expected competitors for this year’s 100-lap showdown on the famed half-mile dirt oval. The list includes some of the most decorated racers in USAC history as well as one of the strongest fields top-to-bottom seen in several seasons.

Defending Silver Crown champion Chris Windom begins his title defense with the return of Kazmark Racing, who is fielding a car in the series for the first time since 2001. Reigning USAC AMSOIL National Sprint Car champion Brady Bacon eyes the addition of one of the few missing pieces to his racing resume: a victory in the Silver Crown series. Five-time and defending USAC/CRA AMSOIL Sprint Car titlist Damion Gardner plans to make his first Silver Crown feature start since 2008.

Past Silver Crown series winners also make up the bulk of the “Sumar” driver lineup, including Aaron Pierce, David Byrne and Shane Cottle.

The event, which debuted with Donnie Beechler’s 1995 score, could see some history made as the expected turnout will likely result in the first qualifying race for the series since the 2008 “4-Crown Nationals” at Ohio’s Eldora Speedway. The qualifying race will be 15 laps, with the top-8 finishers transferring to the final four rows of the 24-car main event.

The first ever Silver Crown event held at Terre Haute was in 1980 when Gary Bettenhausen drove the Delrose-Holt Racing machine to the victory. This will be the 17th edition of the “Sumar Classic.”

Pit gates open at 1pm while the grandstands open at 3pm. Silver Crown hot laps begin at 3:30pm with Silver Crown qualifying pushing off at 4:40pm. Racing begins at 5:15pm.

Tickets for the “Sumar Classic” can be purchased now at http://www.usactickets.com/. Adult infield tickets start at just $15 while children age 10 and under are FREE! Adult grandstand tickets are $25. Fans will receive a free pit pass upgrade with an advanced general admission ticket purchase, which is good for pit entry after 3pm only. Pit Passes are $30 for USAC/UMP Members and $35 for non-members.

For fans who are unable to make the trip in-person, the “Sumar Classic” will be streamed live on http://www.SpeedShiftTV.com/. Race fans can watch on-demand one day after the event at http://www.Loudpedal.TV/.