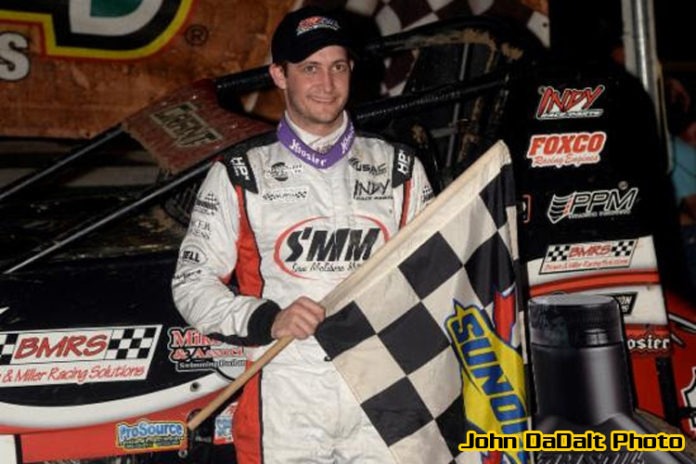 Whether one uses the eye test, the victory lane photos or the point standings to determine how well Justin Grant’s 2017 season has begun, the fact of the matter is that his performance thus far has already rewritten the record books.

Simply put, Grant has gotten off to one of the finest starts any driver has had in the history of the United States Auto Club. So fine, in fact, that he became the first driver in the history of the venerable club to capture feature victories in both the USAC AMSOIL National Sprint Car and USAC National Midget season openers in the very same year.

Though he has already made his mark in 2017, on Sunday, April 2 at the Terre Haute Action Track in western Indiana, Grant could stand all alone as the only driver to win all three USAC National series season-openers in the same season.


A number of milestones are on the line for Grant this Sunday. No driver in USAC has won at least one feature in the Silver Crown, National Sprint and National Midget divisions earlier than April 28, a mark set by the late Dave Steele in 2002.

Speaking of Steele, he is the only driver to win a USAC Silver Crown and National Midget season-opening feature in one season, a feat he accomplished twice in 2002 and 2006. Steele is also just one of three drivers to have won a USAC Silver Crown and National Sprint season-opener in a year, doing so in 2005. Pancho Carter did the deed in 1978 along with Jim Keeker in 1992.

On Sunday at the “Sumar Classic” in Terre Haute, Grant’s opportunity to join these exclusive clubs is right within his reach.

One year ago, Grant nearly pulled off the “Sumar” victory after leading the first 93 circuits of the 100-lapper, but had to settle for second at the checkered behind C.J. Leary. After a strong third-place points showing in 2016 and consistent runs at the front, Grant will certainly be one of the favorites come Sunday to win his first career Silver Crown event on famed half-mile.

After blasting from the launching pad in February down in Ocala, Fla. for a “Winter Dirt Games VIII” victory, Grant followed it up one night later by taking the runner-up spot behind Hunter Schuerenberg. In March, the storybook beginning continued onto the Southern Illinois Center in Du Quoin where the 26-year-old Ione, California native tallied USAC National Midget victory number one.

As a result, Grant now leads both the USAC National Sprint and National Midget standings heading into April as the beginning of the USAC Silver Crown season is set to unfold this Sunday, April 2 at the Terre Haute Action Track in western Indiana.

Admittedly, it’s obviously way too early to anoint Grant as the next single-season USAC Triple Crown champ when the season is just getting into the month of April, but maybe it’s not that far-fetched. At press time, Grant is the only driver to possess full-time rides to chase a championship in each of USAC’s three national divisions, leaving him as the sole hope to join Tony Stewart in 1995 and J.J. Yeley in 2003 to grab all three titles in a single-season.

The prelude to Grant’s coming weekend begins this Saturday, April 1 at southeastern Indiana’s Lawrenceburg Speedway for the USAC AMSOIL National Sprint Cars’ season debut in the Midwest aboard the Sam McGhee Motorsports No. 11.

One day later, Grant makes his debut at the wheel of the combined Silver Crown team effort between Hemelgarn Enterprises and Chris Carli Motorsports at the Terre Haute Action Track for the 17th running of the “Sumar Classic.”

Pit gates open for Lawrenceburg at 3pm while the front gates open at 5. Cars hit the track for hot laps at 6pm with opening ceremonies set to get underway at 7. Adult admission is $25. Kids 7-12 are $7. Children 6 and under are free! Pit passes are 30 bucks.

Pit gates for the Sunday, April 2 “Sumar Classic” open at 1pm while the grandstands open at 3pm. Silver Crown hot laps begin at 3:30pm with Silver Crown qualifying pushing off at 4:40pm. Racing begins at 5:15pm.

Tickets for Terre Haute can be purchased now at http://www.usactickets.com/. Adult infield tickets start at just $15 while children age 10 and under are FREE! Adult grandstand tickets are $25. Fans will receive a free pit pass upgrade with an advanced general admission ticket purchase, which is good for pit entry after 3pm only. Pit Passes are $30 for USAC/UMP Members and $35 for non-members.

For fans who are unable to make the trip to Terre Haute in-person, the “Sumar Classic” will be streamed live on http://www.SpeedShiftTV.com/. Race fans can watch on-demand one day after the event at http://www.Loudpedal.TV/.