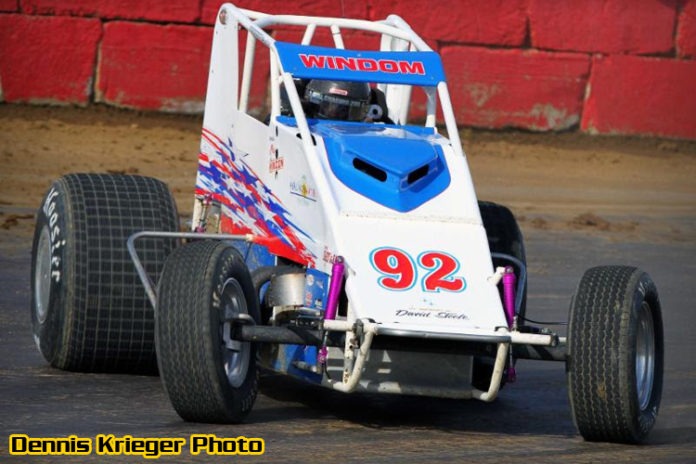 TERRE HAUTE, IN – Chris Windom picked up right where he left off in a number of ways Sunday night at the Terre Haute Action Track.

One night after celebrating a USAC AMSOIL National Sprint Car score at Lawrenceburg (Ind.) Speedway, Windom was back in the familiar setting of victory lane at the 17th running of the “Sumar Classic.”

“It’s pretty special getting the win last night and then to come out here with a brand-new team, I really don’t know what to say. I met a lot of these guys for the first time today. Gene Kazmark gave me the opportunity and gave me a great racecar to come out here and win tonight.”


Incredibly, this was Kazmark’s first entry into a Silver Crown event as an owner since the “Hoosier Hundred” in September of 2001 with driver Ricky Shelton. However, the car itself was a familiar commodity to Windom as it was the same car he drove to victory in his most recent series’ win at Eldora Speedway’s “4-Crown Nationals” for the Fred Gormly/RPM Auto Enterprise team in September 2016. But, a new team means new surroundings, and Windom and the crew quickly adapted to their new environment.

“I’m pretty familiar with the car,” Windom admits. “It’s pretty much the same exact car we won Eldora with last year. That definitely gave us a head start coming in. The guys working on it busted their tails all winter long to maintain and rebuild it and keep it as good as it was last year. It’s pretty special to be able to come out here and do this. I didn’t know exactly what my expectations were coming here since I didn’t know the guys very well, but we jelled right from the first practice session.”

Windom became just the fifth driver in the history of the USAC Silver Crown series to follow up a win in the previous season’s final race with a victory in the season opener the next year. The only other drivers to accomplish that feat are Al Unser (1974), Tom Bigelow (1976), Jerry Coons, Jr. (2011) and Kody Swanson (2015).

In fact, dating to the 2016 “Ted Horn 100” at Illinois’ Du Quoin State Fairgrounds, Windom has been victorious in three-straight Silver Crown events, the 10th driver in the history of the series to do so.

The three most recent “Sumar Classic” winners coming into Sunday, Shane Cockrum (2015), C.J. Leary (2016) and Kody Swanson (2014) owned the lead in the first half of the 100-lap event, but by the midway point, Windom had steadily worked his way to the front from his ninth starting position, utilizing the bottom of the racing surface to make his way through the pack.

By the 50th lap, Windom chomped into Swanson’s lead. The two series champs worked the bottom after Swanson moved his line between turns three and four from the top to the bottom. Windom stuck a nose under Swanson entering turn three, inching along the inside guardrail until the exit of turn four where he was able to clear Swanson to take the top spot by a car-length at the start/finish line as flagman Tom Hansing displayed the crossed flags.

Windom had opened up a near full-straightaway lead over new second-place runner Leary with two-thirds of the race in the bag, while Swanson occupied third. With 18 to go, though, Windom’s lead had grown to seven seconds and the insurmountable advantage seemed unattainable for second on back until eighth-running Bill Rose slowed with an apparent driveline issue to bring out the caution.

With the field bunched up, Windom’s lead was now gone and he would have to contend with defending race winner Leary in the closing laps. However, Windom was able to get a solid jump with the lapped cars of Johnny Petrozelle and Joe Liguori standing between the front two on the lap 83 restart, thus allowing Windom to break away as Leary fought his way around the two to give chase.

Windom and Leary worked the bottom lap-after-lap as Leary slowly, but surely chipped away at the gap. By lap 92, Leary had sliced Windom’s advantage to under a half-second and was still closing.

It was at this juncture one year ago when Leary made the race-winning move for the win, but this year’s lap 93 did not work in his favor as he began to lose valuable ground and Windom started to distance himself from Leary once-and-for-all.

Windom had withstood the challenge, taking the victory by just a tad under two seconds over Leary, Swanson, top-rookie finisher Hunter Schuerenberg and Jerry Coons, Jr.

It was Windom’s sixth career Silver Crown victory, which moves him into the top-20 on the series’ career win list. Meanwhile, he also continued a streak of different “Sumar Classic” winners each year going back to 1999.

“I knew I found something on the bottom,” Windom recalls. “I couldn’t hit it twice in a row for a while, but I finally hit my marks on entry to where I could hit it on the exit. That’s where I’d gain on him off the corner. I didn’t want to show him a nose. I wanted to be able to pass him cleanly so he couldn’t take my line away. We got to traffic and it kind of played in my favor. A low and slow race takes a lot out of you trying to hit your marks like that every single lap.”

“I don’t think our momentum could be much better right,” Windom acknowledges. “It’s awesome to be able start the year like this. I’ve never had a year quite this good this early.”

Greenfield, Indiana’s C.J. Leary continued his impressive runs at Terre Haute over the past three seasons by scoring his third-straight top-two result with a second-place finish in his Chuck & Tammi Leary/Leary Construction – Gray Auto/DRC/1-Way Toyota.

“I think it’s this DRC Silver Crown Car,” Leary humbly attributes for his recent run of success at Terre Haute. “Joe (Devin) and I have been working really well together on this deal. Terre Haute is really not one of my better tracks, but in the Silver Crown car here, two seconds and a win is pretty awesome. I think we picked the wrong tire tonight, though. We went with a 25 instead of a 20 thinking it was going to rubber up early, but it never did.”

“Chris (Windom) and I were about the same speed,” Leary explains during the final run to the checkered. “Every time he’d make a mistake, I seemed to make the same mistake. I figured I could catch him, but I didn’t know if we could pass him. It felt kind of like déjà vu from last year. I thought we might able to pull off the upset, but that’s racing. We’ll load up, go back to the shop and try to make it a little bit faster.”

“You really don’t want to get too far back at Terre Haute behind guys like Shane (Cockrum) and C.J. (Leary), both former Sumar winners,” Swanson said. “I knew I had to figure out how to get around them early on and the top of (turns) three and four seemed to be holding. If you’re going to get to the lead doing it, you got to be the first one to try it. You have to stick your neck out and make something happen. This crew works hard for me and I was going to work hard for them to make sure I got us back to the lead. I did everything I could do to put us in a position to win. I chased it higher and higher; there were so many cars on the bottom throwing the marbles out and, when the moisture went away, you just couldn’t keep doing it anymore and I had to come to the bottom.”

“This team’s a pleasure to race for,” Swanson continued. “We went in with what we thought was going to happen and it just didn’t tonight. We never quit. We gave it everything we had and we’re disappointed because these guys are good and we want to win, but tonight we just missed a little bit. We’ll come back and try again. There’s no one else I’d rather come back to the races with.”