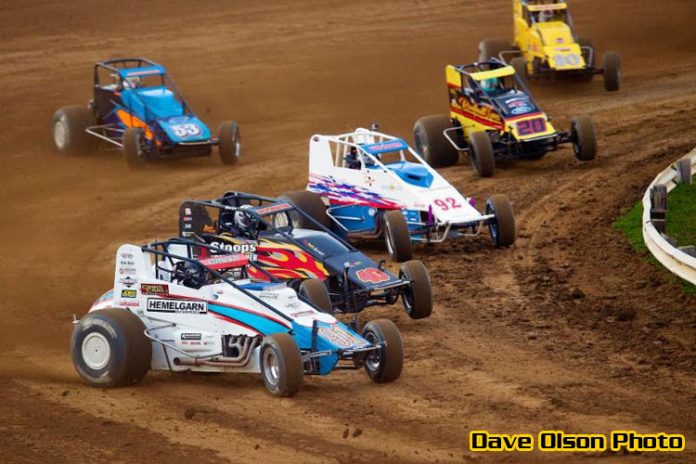 What makes the USAC Silver Crown Champ Car Series so fascinating is its diversity. The 11-race schedule alternates throughout the season at venues ranging from dirt tracks located on the nation’s state fairgrounds with classic covered grandstands to paved surfaces that offer luxury suites and skyboxes.

On the track, a Silver Crown series title requires a driver to be readily adaptable to changing conditions and environments during a single 100-lap race, let alone a full season.

Both skill sets will be on display this week when the series goes back-to-back in a Hoosier state dirt/pavement doubleheader at the Indiana State Fairgrounds in Indianapolis on Thursday, May 25 and Lucas Oil Raceway in Brownsburg, Indiana on Friday, May 26, marking just the fifth time the series will have raced on both surfaces in a span of two nights.


First up is Thursday night’s 63rd running of the “Hoosier Hundred” at the Indiana State Fairgrounds. Kingsburg, California’s Kody Swanson has won the last three at the Indy Mile and, with another victory this week, would equal Al Unser (1970-73) as the only other driver to win four straight Hoosier Hundreds.

Chris Windom of Canton, Illinois has been the dirt dominator in the series since the conclusion of last year’s Hoosier Hundred in which he ran an impressive fifth after his original ride suffered mechanical woes earlier in the evening. Since last May, Windom has reeled off a quadruplet of victories at Pennsylvania’s Williams Grove Speedway, the Du Quoin (Ill.) State Fairgrounds, Ohio’s Eldora Speedway and the 2017 season opener at the Terre Haute (Ind.) Action Track.

Coming into Friday night’s Carb Night Classic, the Swanson brothers stand on a pedestal that competitors have been taking shots at for the last several years, to no avail. Kody and Tanner have an unrelenting stranglehold on Lucas Oil Raceway’s victory lane that has continued for much of the past decade. Tanner has won five and the opportunity to surpass Mike Bliss as the winningest Silver Crown driver at Lucas Oil Raceway lies in wait on the horizon. Yet, older brother Kody was the victor the last time out at the .686-mile oval in July of 2016, getting the upper hand on Tanner who ran second.

Bobby Santos of Franklin, Massachusetts won the pavement season-opener at Phoenix Raceway in April and led the first 80 laps of the Carb Night Classic in 2016 before his engine let go. Santos, a three-time Silver Crown winner at LOR – in addition to three Sprint Car wins and a single Midget victory, will be joined by Shullsburg, Wisconsin’s David Byrne – a last lap, last corner winner in July of 2014.

Pit gates open at noon for the Hoosier Hundred while spectator gates are unlocked at 3. Cars are scheduled to begin on-track activity at 5pm.

Fans will receive a savings of $20 by purchasing their own “Week of Indy” Superticket now at https://usacracing.ticketspice.com/2017-week-of-indy. The Superticket is your golden ticket for admission to all three of this week’s USAC races at a steal of a price!

Thursday’s “Hoosier Hundred” will be streamed LIVE on http://www.SpeedShiftTV.com/. As always, you can watch each and every USAC event one-day after the race, on-demand at http://www.Loudpedal.TV/.