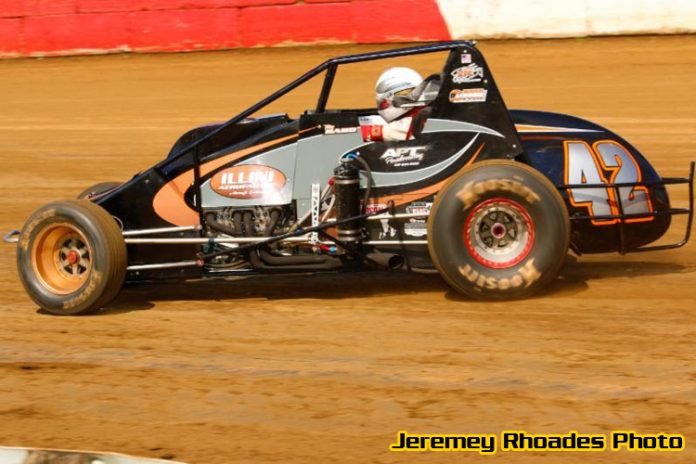 Terry Babb is the latest to enter his name into the field for this Thursday’s “Hoosier Hundred” at the Indiana State Fairgrounds.

The 63rd running of the legendary race in Indianapolis on May 25 featuring the USAC Silver Crown Champ Car Series presented by TRAXXAS now anticipates a field of 40 entrants for the event, which would mark the first time 40-plus drivers were entered for a Hoosier Hundred, or a Silver Crown race in general, since 2005.

Babb, a veteran of all three of USAC’s national divisions, has made two career Hoosier Hundred starts. His first came as a rookie in 1999, then made his return in last year’s edition after a 17-year absence.

Babb will be joined by three-time winners Dave Darland (1995, 1996 & 2004) of Lincoln, Indiana and Kody Swanson of Kingsburg, California. Swanson, who leads the current Silver Crown standings, has won the past three Hoosier Hundreds and, with a victory, would join Al Unser as just the second driver to win four-straight on the Indy Mile.

Greenfield, Indiana’s C.J. Leary won the 2016 season-opening “Sumar Classic” Silver Crown event at the Terre Haute (Ind.) Action Track. He hopes to join his father Chuck, who won the race back in 1997, as the first second-generation winner of the Hoosier Hundred.

Pit gates for Thursday’s Hoosier Hundred open at noon. Spectator gates open at 3pm. Cars hit the one-mile dirt oval for practice at 5pm. Silver Crown ProSource Qualifying is set to get underway at 6:15 while opening ceremonies are scheduled for 7:30pm with the 100-mile main event to begin immediately following.

USAC and Track Enterprises have teamed up to present a Superticket for admission to three of its upcoming marquee events – the “Tony Hulman Classic,” the “Hoosier Hundred” and the “Carb Night Classic” on May 24-25-26 – leading up to the 101st running of the Indianapolis 500.

The three-straight nights of racing in Indiana present open wheel racing at its finest from the USAC AMSOIL Sprint Car National Championship as well as the USAC Silver Crown Champ Cars Series presented by TRAXXAS on both dirt and pavement.

For just $60, fans will receive a savings of $20 by purchasing their own Week of Indy Superticket that’s good for admission to Terre Haute, the Indiana State Fairgrounds and Lucas Oil Raceway on May 24-25-26. To purchase a Superticket, visit https://usacracing.ticketspice.com/2017-week-of-indy or call the Track Enterprises office at 217-764-3200.