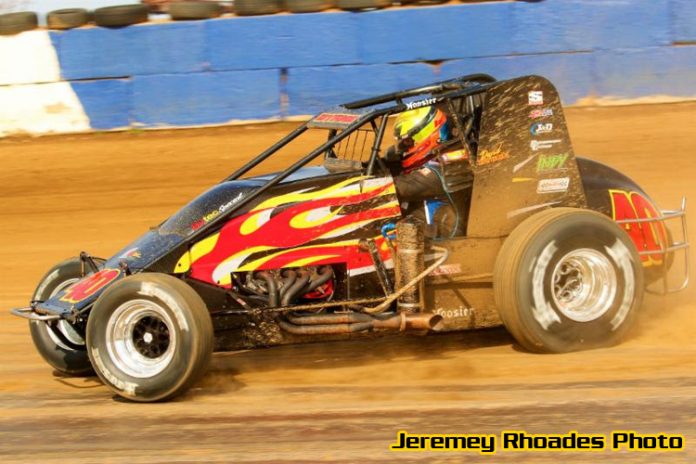 Two-and-a-half years ago, the location was Lucas Oil Raceway – site of this Friday’s “Carb Night Classic.” It was a time when David Byrne was still relatively new at the Silver Crown game with just 10 series starts to his name.

Even though Byrne showed flashes of his abilities at LOR with a pair of third-place runs leading up to that moment, his name was overlooked by many when glancing at the starting lineup for the July 100-lapper.

As 20, 40, 60 and 80 laps went by, seemingly no one was a match for race leader Tanner Swanson. With 17 laps remaining, however, the contest took a drastic change when Caleb Armstrong’s car slowed to a stop, forcing the field to bunch up for a restart on lap 89.

We’ve seen this story before, though. A driver is given a second shot at defeating the race leader following a late-race caution. Sometimes it pans out; sometimes it doesn’t. Usually, the first driver to come to mind to possibly seize the opportunity at this juncture is the driver second-in-line. Certainly not the third-place driver either. But the fourth-place driver? No way.


Or so many people thought.

Additionally, Byrne had a lapped car in front of him that he would have to negotiate. It was a meteoric task in such a short period of time to pull off, but Byrne had no reservations.

As all eyes focused on the battle for second, Byrne methodically took ahold of third with an outside pass of two-time series champ Kody Swanson on lap 91 and an inside pass of Daytona 500 winner Ryan Newman just moments later in turn one.

Surely, he couldn’t catch Tanner Swanson, the pole winner who had dominated every single lap of the event leading up to this point. Inch-by-inch, Byrne pulled closer to Tanner, then made his move by cutting to the bottom of turn three on the final lap. The two went wheel-to-wheel through the entire corner until Byrne emerged ahead at the exit of the fourth turn to collect his first and, thus far, only career USAC Silver Crown victory.

The triumph was, is, and always will be the benchmark for Shullsburg, Wisconsin’s Byrne, who is one of just three drivers from The Badger State to win a Silver Crown race (Tom Bigelow and Billy Engelhart).

“The win was my first on a national circuit, so it’s at the top of the list,” Byrne acknowledges. “I knew we were good that night, but I couldn’t get out of turn four, so I radioed Chuy (crew chief James Sandberg) and he had me dial in some shock adjustments. That’s all it took.”

Move forward to April of 2017 at Phoenix Raceway and David Byrne is in position to win another. He led 69 laps and appeared to have the strongest car on every restart and the long runs. But, victory number two would be put on hold as Bobby Santos used a crossover move off of turn four just eight laps from the end to defeat Byrne.

The experiences of a racecar driver, with its numerous highs and lows, can fluctuate any which way the wind blows. Yet, it’s ultimately up to the driver and team to decide on where they will travel on each of their peaks and valleys. David chooses to look at every experience, no matter how pleasant or frustrating, as a stepping stone to something bigger and better to come as the season plays out.

“I wanted to go straight to the Indy Mile after Phoenix. It’s been a long wait,” said the driver who made his series debut in 2011 in home state at the Milwaukee Mile. “The start of something big has been brewing for a while and I think we are in the best position to compete and win than we’ve ever been. Mainly, I think it (Phoenix) made us a contender in everyone else’s eyes. I knew we could do it and my dad and Chuy knew we could do it as well or we would have quit a long time ago.”

David has certainly proven that as fact, continually taking progressive steps toward the top rung of the ladder as the 31-year-old begins to settle into the series veteran role in his third full-time year on the trail. In 2015, he finished 10th in points and, at the conclusion of the 2016 season, was fifth. Currently, he stands a career-high fourth in the standings after finishes of 14th and third in his first two starts at Terre Haute, Ind. and Phoenix, respectively.

Running for a Silver Crown championship is unique among the majority of other racing series in that its schedule is fairly evenly split between dirt and pavement tracks. Byrne had competed solely on the blacktop for the entire duration of his career until late 2014, but the true test of a driver’s ability is to compete for a series title. That meant purchasing a new dirt car and venturing onto unfamiliar ground of the likes of Terre Haute, the Indy Mile, Williams Grove, Springfield, Du Quoin and Eldora.

Since then, the once-dubbed “pavement specialist” has made steady improvement on the dirt, earning a solid seventh-place finish at the “Hoosier Hundred” in 2016. Morale is high and David assures his confidence on the dirt has peaked to its highest level as the teams strives to reach the next level of consistency as a front-running threat on the dirt.

The Byrne family business began in 1983 when David’s father, Steve, opened Bytec, Inc. The operation for David, Steve and their employees involves hauling 100+ million gallons of byproduct from cheese factories and food processing plants each year and applying them to the farm fields for a green fertilizer.

With most days devoted to work, that doesn’t leave the Byrnes much time to operate and prepare multiple cars for a run at a championship. However, Chuy, who runs the team’s shop at National Sprint Car Hall of Famer Steve Stapp’s former workspace in Brownsburg, Indiana, has become a godsend to the team as the crew chief and daily caretaker of the number 40.

“The cars are prepared so good that it makes it really easy to improve on my driving every time out,” Byrne praises. “It’s really easy for me. Chuy does all the work on the cars. The family business takes most of my time. Chuy treats the equipment as if it were his own, so it takes a lot of pressure off me.”

Having dedicated people on your crew who can take care of all the ins and outs of a dirt and pavement car operation is a necessity to compete for a title, but the ante is upped this week as the Silver Crown series will compete on consecutive nights – one on dirt and one on pavement. Byrne is one of just 11 drivers set to pull double-duty on both surfaces beginning with the 63rd running of the “Hoosier Hundred” Thursday night, May 25, at the Indiana State Fairgrounds in Indianapolis and concluding with the “Carb Night Classic” Friday night, May 26, at Lucas Oil Raceway in Brownsburg, Indiana.

On the previous four back-to-back nights of dirt and pavement races in USAC’s Silver Crown history, Mario Andretti took home both of the weekend’s 100-mile races at the Missouri State Fairgrounds in Sedalia and the Illinois State Fairgrounds in Springfield back in 1974 aboard the Vel’s Parnelli Jones Racing number 2 on August 17-18. J.J. Yeley swept 100-lappers on consecutive nights on May 22-23 of 2003 at Lucas Oil Raceway (then called Indianapolis Raceway Park) and the Indiana State Fairgrounds in Bob East & Tony Stewart’s number 9. In 2008, Dave Darland won on the dirt at Terre Haute and Bobby East won on the pavement at Lucas Oil Raceway. Last year, the brothers Swanson captured both events with Kody taking the win at the “Hoosier Hundred” and Tanner collecting the “Carb Night Classic.”

The two venues in play this week are the home of Byrne’s best dirt and best pavement finishes with the series. While it’s a tough row to hoe for anyone who straps into one of these 1625-pound, 800 horsepower machines on a regular basis to win one or both events this week, don’t count David Byrne out by any means. Most of us did so at LOR two-and-a-half years ago. David Byrne made us, and his competition, pay for that one in one of the most exciting finishes in the 47-year history of the Silver Crown division.

For Thursday night’s “Hoosier Hundred,” spectator gates open at 3pm. Practice is set for 5pm, ProSource/B & W Auto Mart Qualifying at 6 and racing at 7pm. Over 40 cars are entered for the Hoosier Hundred, making it the largest anticipated field for a Silver Crown event since 2005!

The spectator gates for Friday night’s “Carb Night Classic” at Lucas Oil Raceway open at 2:45pm with racing set to begin at 6:30pm.