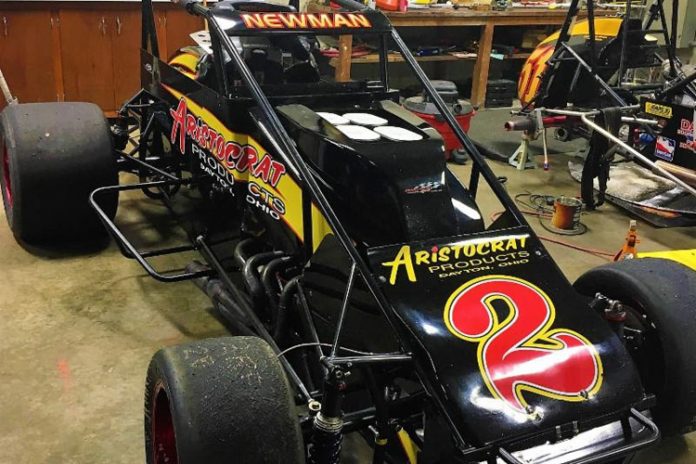 Johnny Vance’s stealth black Beast with its golden yellow lettering and shimmering cherry red wheels was one of those cars that always caught your attention, even as it sat still in the pit area.

Though it had been four years since the Aristocrat Products USAC Silver Crown car had competed in an event, there was always that suspicion that the Dayton, Ohio-based beauty out of Dayton, Ohio would roll out of the trailer and make its return to an event somewhere along the line.

After Vance’s passing in June of this year, those hopes seemed to be dashed as the realization came that one of the great USAC car owners of our time would no longer be in the trenches of competition after three-plus decades, three National car owner titles and 52 National wins.

But, alas, the roar of the engine under the hood of the No. 2 would no longer remain silent as arrangements were made to have 2008 Daytona 500 winner and 1999 USAC Silver Crown champ Ryan Newman take the wheel of Johnny’s car once again for one more ride in this Thursday night’s “Rich Vogler/USAC Hall of Fame Classic” at Lucas Oil Raceway in Brownsburg, Indiana.


The car was fired up for the first time this past Monday at Mike Bowman’s shop. The car was put together as the crew went through everything with a fine-tooth comb to make sure everything would be a go. Once the letters “NEWMAN” were adorned across the visor, the ride was officially Newman’s, a ride that is especially important in light of recent events.

“Johnny’s stepson (Jonathan Hadaya) and Johnny’s widow (Fadia) gave me permission to take the car over to Bowman’s shop to get it ready for the race,” Newman explains. “To me, this is about paying tribute at the Rich Vogler Classic. That makes it very special for me to be able to jump in this car.”

The abundance of tributes to our recently fallen racing heroes are linked between Vance’s car and the namesake of the race, Rich Vogler. Newman was the recipient of the Rich Vogler Memorial Scholarship, which he used to pursue an engineering degree at Purdue University. Vogler was Vance’s first driver in 1981 after purchasing the equipment from the late Don Seibert. The driver who had the ride in Vance’s sprinter immediately prior to Newman was Dave Steele, who lost his life this past March in a racing crash at DeSoto Speedway in Bradenton, Florida. In addition, the last driver to turn a lap at speed in Vance’s Silver Crown car prior to Monday was Bryan Clauson during a test at Lucas Oil Raceway a few years back. Clauson lost his life in an accident at the “Belleville (Kans.) Midget Nationals” last August.

The significance of the track is not lost on Newman either. The .686-mile paved oval is where Vance won his final USAC race as a car owner, with Tracy Hines, in July of 2010. Yet, it’s also the venue that hosted both Newman’s first career USAC National Midget victory in 1997 as well as his initial Silver Crown triumph in 1999, both of which were televised on ESPN’s “Saturday Night Thunder” program. It was an era and a showcase that Newman believes served as a launching pad for an opportunity in NASCAR.

“Oh, it’s huge,” Newman acknowledges. “There’s a lot of people who, due to the (ESPN Thunder) TV shows, became famous in the open wheel world because of IRP. The quality and quantity of good racecars and racecar drivers that competed on that racetrack, made it the place to race and the place to win.”

Fittingly, Lucas Oil Raceway (Indianapolis Raceway Park as it was known at the time) was the location of Newman’s first USAC Sprint Car start for Vance in August of 1999, a second-place finish behind Vance’s former driver, Dave Steele. But it was an auspicious beginning for Newman and Vance that included a productive, but brief tryout at the famed, lightning-fast high banks of eastern Indiana’s Winchester Speedway, where Newman earned the ride.

“(Vance) auditioned me at Winchester Speedway,” Newman recalls. “We met at the racetrack and he had Kenny Irwin, Jr. drive it first. It was just Johnny, Kenny and myself. We had problems with the car all afternoon; it was sputtering, missing and misfiring. We changed the mag, changed the fuel pump and changed a bunch of stuff before we realized we had a bad sparkplug. After changing out the sparkplugs, I finally got on the track where I ran about three laps before I came back onto pit lane. Johnny said, ‘That’s it. Load it up.’ I said, ‘What’s the matter?’ He said, ‘That’s all I needed to see!’ It was pretty cool to have Kenny there. Kenny was Johnny’s other son, his racing son, I guess you could say. For me, personally, to go to a place like Winchester and have Kenny there who had run so well for Johnny, it was really special.”

Four days later, that three-lap Winchester test would work wonders as Newman drove to his first career USAC National Sprint win at the half-mile. The following May, Newman would win his second at Anderson (Ind.) Speedway, which would prove to be both Newman and Vance’s final USAC National Sprint Car wins.

The list of drivers who’ve won in Vance’s equipment are some of the who’s who of open-wheel short track racing: Vogler, Steve Kinser, Jack Hewitt, Jac Haudenschild, Joe Saldana, Gene Lee Gibson, Steve Butler, Jim Mahoney, Irwin, Steele, Tony Elliott and Tracy Hines. Ryan Newman is appreciative of the opportunity he had to race with an individual like Vance who was so entrenched in the sport in a variety of avenues.

“To drive one of his Sprint Cars and Silver Crown cars was an honor,” Newman praised Vance. “After I won the (Silver Crown) championship in 1999, he gave me an opportunity to defend it. He had an amazing career long before I drove his racecars. From what he did as a car owner and as a steward for USAC, he had seen it all and done it all. He sponsored cars, he owned cars and he knew what it took to win by always having a good driver and a good wrench.”
The summer Silver Crown race prior to Brickyard 400 weekend has become an annual tradition for Newman that allows him an opportunity to return to his roots and race with and against people he considers family.
“Silver Crown cars are fun to drive and it’s nice to go back and see people I consider family,” Newman said. “It’s just some of the faces are getting older like mine,” Newman said with a laugh. “My whole family will be there – my mom, dad, sister and brother-in-law. I’ve never been to a high school reunion, but I imagine this is way cooler than that.”

The 39-year-old South Bend, Indiana native has become one of the most successful drivers to transition from USAC to stock cars during his 16-year career as a full-time competitor in NASCAR’s premier series that includes 18 wins, 51 poles and a 2nd place points finish in 2014. Yet, he still harkens back to his years in the USAC Silver Crown Series that taught him the trade on not only how to compete, but to win, in longer races.

“The 100-lappers prepared me well,” Newman stated. “With a Silver Crown car, there’s a balance of running hard and managing your tires. You never knew what was going to happen with cautions throughout the race either. I remember running 100 laps straight at Pikes Peak one year. You never quite knew what you’re going to have to fight. In the end, you had to manage your tires because you had to manage the fuel load. Carrying 60-70 gallons was a different feel. It was unique and it wasn’t what you did in a midget or sprint car. That definitely translates to the stock cars. Overall, I think the best drivers in the world come from open wheel racing because they know they can’t just plow through the guy in front of them. You have exposed tires and you’re going to end up tipping yourself over. There’s a sense of skill and finesse that goes into an open wheel driver’s mind that he can carry with him to make him one notch better than the guy who’s raced with fenders his entire life.”

Pits open for Thursday night’s event at 2pm with grandstands set to open at 4pm. Practice for the Silver Crown cars begins at 5:30pm with ProSource Qualifying set for 6:30pm. The 6th Annual USAC Hall of Fame induction ceremony is slated for 8pm while engines for the 100-lap main event are scheduled to fire off at 8:45pm.

Adult general admission tickets are $25 while children 11 and under can get in for just $10.