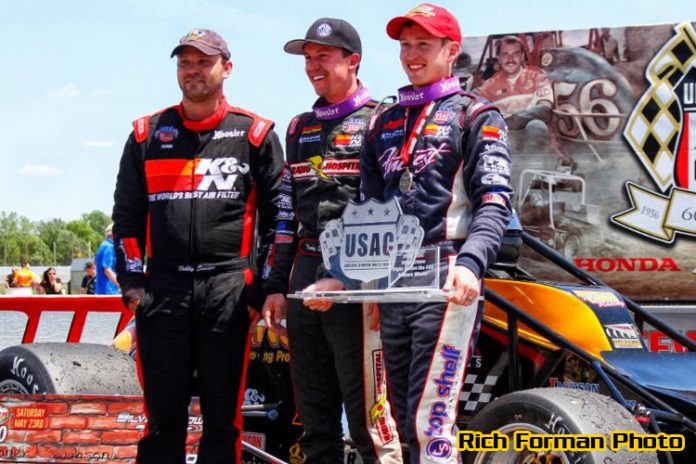 Each generation provides a group of racers who stand out amongst the crowd in regards to their prowess on certain types of surfaces, distances and the types of car.

In the decade of the 2010s, a trio of drivers have maintained a stranglehold of Brownsburg, Indiana’s Lucas Oil Raceway each time the USAC Silver Crown Champ Car Series presented by TRAXXAS has made the trip to the .686-mile paved oval west of Indy where they head to this Thursday night, July 20 for the “Rich Vogler/USAC Hall of Fame Classic.”

Earlier this May when series made the first of two visits to LOR this season, those same three names once again were in play as the race unfolded: Kody Swanson, Bobby Santos and Tanner Swanson 1-2-3. An oh, so familiar sight that has greeted onlookers each time these past seven years.

All three first competed in the same Silver Crown event at LOR since 2011. Since then, none have missed a race and, in fact, in the 11 series races held since that point, there hasn’t been a single race that hasn’t had a Santos or Swanson in the top-three at race’s end!


Solidifying their status as the best pavement, short track open wheel drivers of their generation, perhaps the statistic that shows the resounding effect of their dominance is that, since 2011, the Swansons and Santos have teamed up to lead 1071 of the 1100 laps run at LOR Silver Crown events over the past seven years. Just a tick over 97 percent!

Though it should be no surprise to those who’ve followed the series for the past several years, the numbers and consistency that Kody has established is simply remarkable. Since 2011, the 2014 and 2015 Silver Crown champ has finished 1st, 2nd, 2nd, 2nd, 2nd, 3rd, 2nd, 2nd, 2nd, 1st and 1st at LOR.

After years of playing second fiddle to Tanner’s run of succes at LOR, the Kingsburg, California native, who now resides in central Indiana, finally bested his brother last July to capture the “Vogler/Hall of Fame Classic,” turning the tables to end a run of five consecutive occasions that he’d finished 2nd to Tanner at LOR.

This past May, Kody repeated his winning performance at LOR by winning the “Carb Night Classic.” He did so having to fend off, you guessed it, Santos and T. Swanson on a green-white-checkered restart to conclude the 100-lapper.

Slipping by for second on the dash to the finish was Bobby Santos. The past NASCAR Whelen Modified champion who hails from Franklin, Massachusetts is a three-time winner at LOR, once in 2009 as well as a sweep of both events in 2012, including the summer race in which he passed Kody on the 14th lap before putting him to take back the throne after Kody won his first in 2011.

After a string of hardship at IRP that saw only one top-three finish in a five-race span between 2013 and 2015, Santos regained his form with some magic in early 2016, leading 80 laps before an engine failure sidelined his winning bid with 20 laps remaining. He then returned in the summer, finishing a solid fourth.

This year, though, Santos has stepped his game up even more, racing to a thrilling victory over Kody and David Byrne in April at Phoenix to begin the season. He then followed it up with a strong second-place run at LOR in May.

The man who led 434 of those 1100 laps at LOR since 2011 laps is Tanner Swanson. The Kingsburg, California resident saw a string of seven consecutive top-two finishes at LOR end in the final laps of May’s race, before coming home third for his eighth consecutive “podium” finish. Tanner won five of six at LOR between 2013 and 2016 with the only aberration coming from David Byrne who made a last-lap, last-corner pass for the win in the summer of 2014.

Byrne is among a pair in this year’s field who’ve won their first career Silver Crown race at LOR. Ryan Newman will take a brief sabbatical from his NASCAR duties to return to his roots. He plans on doing so driving the Aristocrat Products No. 2 of the late, legendary team owner Johnny Vance. Newman won his first Silver Crown race in May of 1999 at what was then called Indianapolis Raceway Park.

Past Silver Crown champs Chris Windom and Jerry Coons, Jr. reside in the second and third spots, respectively, in the series standings. Both have yet to win at LOR during their great careers, but their teams are no strangers to success at LOR. Granted, it has been a while. Dave Steele won in the black No. 92 back in the summer of 1999 while Gene Nolen’s yellow No. 20 reached the promised land in 1991 with Johnny Parsons and 1995 with Jim Keeker.

Pits open for Thursday night’s event at 2pm with grandstands set to open at 4pm. Practice for the Silver Crown cars begins at 5:30pm with ProSource Qualifying set for 6:30pm. The 6th Annual USAC Hall of Fame induction ceremony is slated for 8pm while engines for the 100-lap main event are scheduled to fire off at 8:45pm.

Adult general admission tickets are $25 while children 11 and under can get in for just $10.