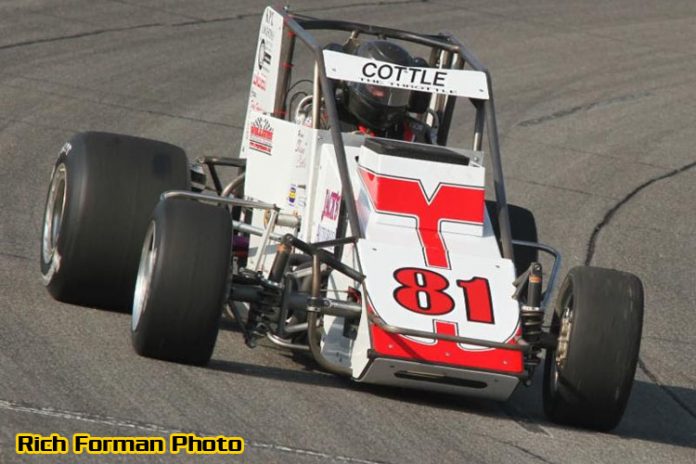 Cody Gallogly has been tabbed to make his debut as the driver of Curtis Williams’ Silver Crown car for this Friday’s Hemelgarn Racing/Super Fitness “Rollie Beale Classic” at Toledo Speedway.

The Pataskala, Ohio native turns 26 on Wednesday, but it was a few days earlier when Gallogly received as good of an early birthday present as he ever could’ve imagined.

“Curtis Williams and I have been friends for a long-time,” Gallogly explains. “I’ve known him from when I started racing 305 (sprint cars) on pavement. He fielded another car at the time, but he watched me transition from the 305s to the 410s. I ventured off and started running the dirt, but we’ve stayed in contact ever since.”

The red and white No. 81 has been a fixture on the USAC Silver Crown Champ Car Series – presented by TRAXXAS – scene for the past two seasons on both the dirt and the pavement with Kokomo, Indiana’s Shane Cottle behind the wheel. Cottle led nine laps and finished second in the car at the 2016 “Hoosier Hundred” behind winner Kody Swanson and drove the Jack’s Auto Body – Roger Williams Precision Engines/Big Car/Williams Chevy as recently as last Thursday at Brownburg, Indiana’s Lucas Oil Raceway where he was involved in a practice crash that, for all intents and purposes, ended his night.


Gallogly, pronounced GUH-LOH-GLEE, is a veteran of a decade of sprint car racing, both on the dirt and the pavement as well as with and sans the wing. The first seven of those years were spent primarily on the pavement where he won an Auto Value Super Sprint Car feature at Michigan’s Kalamazoo Speedway in 2015.

A few years back, Gallogly sold all his pavement racing equipment and made the full-time transition to the dirt wing sprint car world where he’s been a regular at Fremont and Attica and a part-time competitor with the Arctic Cat All Star Circuit of Champions, but as he tells it, USAC, and specifically the Silver Crown cars, is the place to be.

“When you’re born and raised in the open wheel life, USAC is premier,” Gallogly said. “That’s what you always hear about. That’s the big series to go to. As a local sprint car driver, it’s always been a dream of mine, especially to run the Silver Crown cars. To me, it’s the granddaddy of open wheel racing.”

Although he’s been away from the pavement for a couple seasons, Gallogly doesn’t bat an eye when he says the blacktop (and Toledo Speedway) is home sweet home, despite being a roughly two-and-a-half-hour drive from his Pataskala.

“Pavement’s what I grew up racing,” Gallogly said. “It’s just second nature when I get back on it. I’ve probably ran at Toledo five or six times in my career. The last time I was there was in a wing car and I set fast time, barely missed the track record and ran third in the feature without brakes. It was a pretty good night. I love Toledo Speedway. It’s probably my favorite pavement track.”

Not all his sprint car experience has come with the wing. He has made sporadic starts in Michigan in addition to extensive testing sessions which he was using as preparation for a run at the 2015 Payless “Little 500” at Anderson Speedway, which came to a conclusion before he ever got going when engine woes sidelined him for the weekend, less than 24 hours prior to Pole Day Qualifying.

With that said, Gallogly’s venture into a Silver Crown car will be a challenge unlike most anything he’s ever competed in before, save for a start in a 100-lap CRA Late Model race on the Winchester (Ind.) Speedway High Banks. In fact, his first time sitting in the seat of a Silver Crown car will come this Friday when he’s set to roll off for the first practice session.

“The hot lap session on Friday will be my first time in the car,” Gallogly states. “Obviously, the Silver Crown cars are heavier and bigger, but with my 410 non-wing experience, I think I know kind of what to expect.”

For the time being, Gallogly’s deal with Williams is for Toledo and Toledo only. Ultimately, Gallogly would cherish a full-time seat with a team on both the dirt and pavement down the road, but, first things first, his focus lies squarely on Friday and the “Rollie Beale Classic.”

“The goal is to keep the car in one piece,” Gallogly admits. “I just want to gain experience and, hopefully next year, I’ll be back in this ride. I don’t really have any expectations. I just want to have fun with these guys and do the best we can and to get the opportunity to go back racing with the guys I grew up with like Kody Swanson, Bobby Santos and all those guys.